Mt. Rubidoux from the top 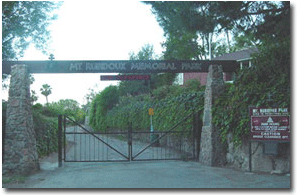 I've lived in Ontario for 25 years and probably driven by Mt. Rubidoux hundreds of times on HWY 60 as we have been headed eastbound for one adventure, or another over the years. I have intended on more than one occasion to get off the freeway and walk to the top of Mt. Rubidoux, but, to my shame, I never have. I'm sure it is the same for many of my readers. You live in an area for decades and never explore the little treasures close at hand, or even the big treasures, for that matter. There is a local winery, San Antonio Winery, less than a mile from my home that I have never visited. In fact, there are 3 wineries in the area I have never visited, but I have visited wineries in Napa and Temecula numerous times.....why on earth is that? Well, I am determined to change that.

A view of Rancho Jurupa from Mt. Rubidoux 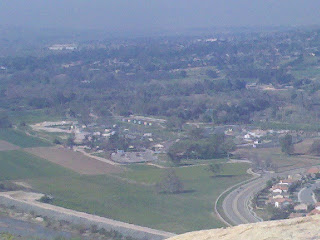 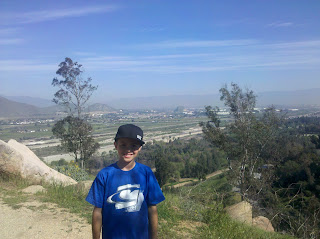 Today was one of those days. My grandson, Christopher, spent the night with us and I asked him if he was interested in hiking to the top of "that mountain over there"......Rancho Jurupa sits in the shadow of Mt. Rubidoux.....the entrance to the park is less than 3 miles from where we now live......it's NOW, OR NEVER! 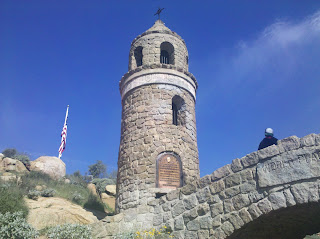 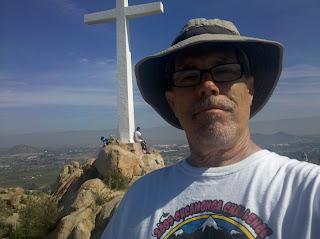 I grabbed a couple of bottles of water, a hat and we got in the car and drove over to the park entrance arriving around 9:30am. I had no idea how popular this hike is...we had to park 3 blocks from the entrance and walk to the entrance. On our way up the very gradual 2 mile climb to the top we saw probably a hundred, or more people going and coming. The days was very clear, and we arrived at the top in less than an hour. There were numerous groups of young mothers pushing their babies in strollers to the summit, and then back down. There were also numerous cyclists making the roundtrip. 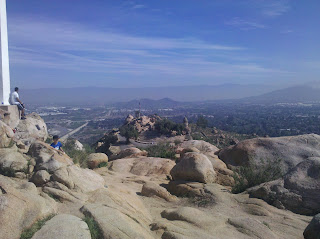 There are two things you can see from a distance when viewing the top of Mt. Rubidoux. One is the enormous cross at the highest point, and an enormous flag pole with the "red, white and blue" flying in the ever present breeze. The cross, up close, appears to be 80-100 feet high. You will see my grandson at the base of the cross in one of the attached pictures. The path to the top is very smooth asphalt. The grade must be 3%, or less. It is an easy hike, even if you are not in shape. 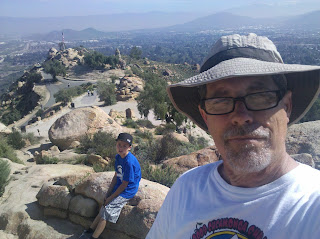 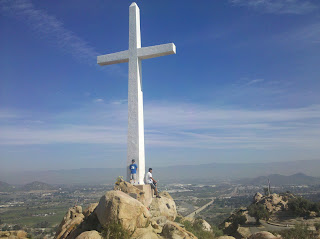 OK, one more local treasure visited, and checked off the list! 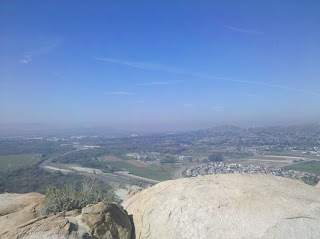 Posted by Whatsnewell at 7:58 PM