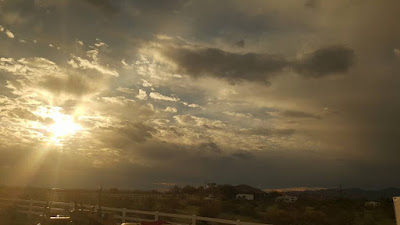 My friend Tom spoke with our mechanic, Leo, at 'All Aboard America' about 7 am Friday to see if he had been able to discover the issue with my 'Jake' brake.......he had not had time to get to it at that time.  I was not up until after 8 am, so this was my news to start the day.  I worked on my blog post for the day, and then called Leo again at 9 am, but still no progress.  I decided to busy myself with something else and stop worrying about it, and bugging Leo until the afternoon.  I was anxious to get good news as we wanted to get the coach back Friday afternoon, or else it would be there until Monday.

Just about 1 pm I called Leo again, and happened to catch him just as he was putting things back together.......he had fixed the 'Jake'.  As it turned out the solenoids were, indeed, both working, but the 'Jake' was not being activated so he pulled off both valve covers to find that the oil tubing which connects both 'Jakes' had a leak in it so there was no oil pressure to the 'Jakes'.  Once he fixed the leak by tightening up the connections the oil pressure returned and the the 'Jakes' were working once again.

So, here's the deal......it takes about 75 minutes to drive across town to Mesa, AZ from Wittmann, which meant if we left by 1:30 pm we would get there around 2:40 pm, or later depending on traffic, which means we would be ultimately be driving the coach back to Wittmann in rush hour traffic.....rush hour in the Phoenix area is from about 3 pm to 7 pm......uggggh!

Well, we did leave shortly after 1:30 pm (TLE and I) in the VW to make the drive over to 'All Aboard America'.  Traffic was heavy through downtown Phoenix on I-10 as we expected, and we arrived around 2:45 pm.  We quickly paid the bill ($895) and were on our way back to Wittmann just before 3 pm.....traffic was already heavy the way we had come so we took the long way back.......the long way is about 11 miles longer, but the traffic was significantly better that way.  As it turned out we got home in about an hour and forty minutes.....not too bad.  I noticed the 'Jake' was working way better than it ever had in the past, and I now surmise that one of the 'Jakes' had not been working for some time due to the oil leak, which must have worsened to the point this summer where both stopped working all together.  The loose wire Leo found was just one more issue.  Now when I back off the accelerator it slows down much more quickly.

Some may wonder about the cost to do the service and repair the 'Jake' so here is the breakdown:

As is often the case, labor is the major cost component.  About four of those hours was for two mechanics (Leo and his helper) doing the service (lube, oil, coolant, filters) which took about 2 hours, and the other 4 hours was for the time Leo spent by himself troubleshooting the 'Jake' brake.  Obviously I had my own oil, which I had purchased at a big discount almost two years ago, otherwise we would have been over $1,000 easily.  Anytime my bill is under $1,000 I am grateful!

We arrived back home with our 'home' just before 5 pm, and quickly got the coach backed into its spot, hooked up the utilities, and then began moving our clothing from the house, and food from the garage refrigerator back into the Newell.....by the time this was complete it was after 6 pm and I was tired!  We had dinner with Tom and Darlene and then retired to the coach for the evening......so nice to be back in our own space!

So, now we have gotten the Newell serviced, the 'Jake' fixed (very important to have to extend brake life) and we are ready for some traveling.  We'll be departing Wittmann within the next 7 days for Quartzite, and then we'll probably head into Death Valley for a couple of weeks, or more.....stay tuned!

Thanks for stopping by1
Posted by Whatsnewell at 8:32 AM