Elaine and I were up by 5:16 am to get ready to be on the road to Los Algodones for our dental appointments no later than 7 am.....it's 193 miles, and would take about 3+ hours.  I had taken the nighttime version of a popular cold remedy, and as one might expect, the nighttime version includes ingredients designed to help one sleep more soundly.  My eyes did not wish to be open, especially at 5:16 am.....especially.

I slept in the recliner once again in order not to cough, and I did not cough, so I had that going for me.  I hadn't been outside the Newell more than a few seconds since Saturday and the thought of having to sit in a car for 6-8 hours Tuesday did not appeal to me.....even a little.

Tuesday's dental menu included the finish to TLE's root canal, and me, hopefully, getting my impressions done for my two crowns, and finally TLE having two other teeth examined for possible cavities.....fingers crossed.

We stopped briefly in Gila Bend for a potty break (I was driving) and then 26 miles later at a rest area near Dateland, AZ to change drivers......TLE got us to the Quechan border parking lot by 10:20.  By this time I was ready to take a nap, but that was not to be......we sat in the car for about 20 minutes and then began our 10 minute walk over to Dr. Hernandez' office where TLE's root canal work would be completed......my appointment was at 12 noon, however, shortly after arriving at Dr. Hernandez' office Dr. Eva Urena's office called to say they were ready for me early, so I walked across the courtyard to get my impressions done.... 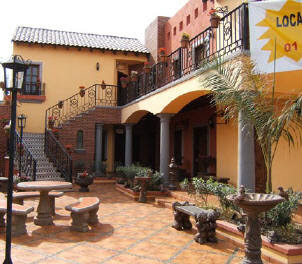 The courtyard in front of Dr. Urena's office....Dr. Hernandez'
office is to the left 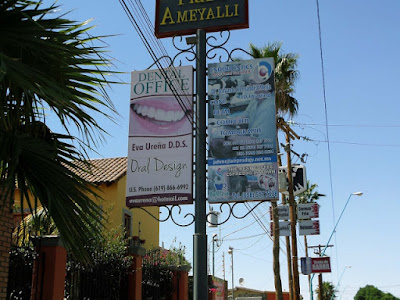 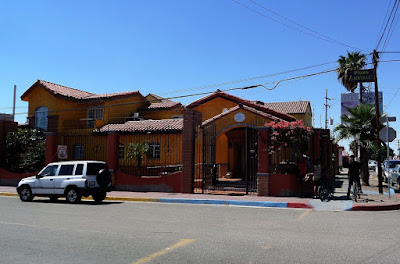 ......well, as they they say, "if I didn't have bad luck, I wouldn't have any luck....", and that was my fate Tuesday......during the past month I had allowed food to get stuck between my temporary crown and the next tooth, and food to get stuck around the tooth next to the implant, which caused gum inflammation, which meant she could not get a good impression.....which means......yep, you guessed it....another month to allow the gums to heal, and during which time I must work vigorously to keep the area clear of food.......HELLO MR. JELLO!  I know when this happened......since I have been sick I haven't kept the best dental hygiene, and that is my bad......lesson learned.....no matter how shi**y you feel, floss and brush every day!

Meanwhile, back at the ranch, I walk back over to Dr. Hernandez' office to await TLE's appearance, take care of paying the balance on her root canal (total cost was $420).  She came out a few minutes later and we headed back over to Dr. Urena's office for her to have two other teeth assessed.  It turns out both teeth will probably have to have root canals and one of them a crown.....there goes our cross country trip to Florida.

By the time all of our remaining dental dates have come and gone we will be well into March, which means we will be hanging around the Arizona and California deserts boondocking and dry camping until it is time to return to TVC*.  Right now we are trying to wrap our minds around our disappointment.  As one's years advance it is more difficult to make long range plans.....there are so many more things that can happen healthwise that force you to change your plans.  You can sit around feeling sorry for yourself, or you can change the plan and create a new vision for the next few months.....after all, we do have wheels on our home, and we can spend the next few months in a number of amazing places within driving distance of Los Algodones, and that is what we will do!  We will be returning to Borrego Springs at some point, heading to Death Valley at some point, heading to Quartzite at some point, and who knows where else?

Crossing back over the border into the USA took forever.....usually it takes anywhere from 10-15 minutes, but this time the computers were running very slowly and it took us well over an hour.  By the time we stopped for a bite of lunch, and to refuel it was after 3 pm and we still had the 3+ hour drive back to Wittmann.  We arrived back at the coach around 6:30 pm, and settled in for the night.  More good news followed our arrival home.....TLE thinks she is getting a sore throat......😩

TLE went to bed early, and I continued to watch Breaking Bad.......I finished off season 4 around midnight, turned the heater down, and settled into the recliner for my night's sleep.....still can't sleep in bed without coughing, but I can in the recliner.  Feeling much better....blowing my nose less, coughing less as I sit here typing......for a while this week I was afraid I might die (figuratively), and then I was afraid I might not die (figuratively)......now my future looks bright again.