7:02 am - PDST - Tuesday - 54º F, humidity 54%, wind 3 mph out of the north.....clear blue skies.....big winds were forecast, but have not materialized in the magnitude they were forecast to be......thankfully!  We are getting a few gusts of wind periodically, but nothing like we expected.

We haven't had the tandem out for a ride since Borrego Springs so I suggested to TLE that Monday we should take a tandem ride north on the SART* into San Bernardino to a little Subway store to which we have ridden numerous times over the past few years.....it's a great out and back ride with a Subway footlong Club sandwich thrown in for good measure.  Before that could happen I needed to give TLE's Cannondale road bike a tuneup and thorough deep cleaning as I had just done to my Bad Boy.  That took about 90 minutes to accomplish, then it was time to get out the Cannondale tandem, check the air pressure in her tires, and get her ready to ride.

The forecast high for Monday was in the high 60's, and by the time we began our ride it was still quite cool with a little breeze thrown in for good measure, and the sun was making occasional appearances through the partly cloudy skies.  I love riding the SART* on first Saturdays (Mondays) as there are not as many people as on the weekend.....you might see another bicyclist every 5-10 minutes, and that was the case on this first Saturday.

A little side note for those newer readers of my blog about the term '1st Saturday'.......I have not used the term 'first Saturday' in a long time, so you might be wondering to what I am referring.  So, you know that wonderful feeling you get when you wake up on a Saturday morning thinking, at first, you have to get ready to go work, and then realize it is Saturday and you don't?  Well, when I first retired every day felt like Saturday so I renamed Monday '1st Saturday', and Tuesday '2nd Saturday', and so forth, because everyday now felt like Saturday.  Another thing I love to do is go to Home Depot on '1st Saturday', because it's not nearly as crowded as on 'real Saturday', right?  So, there you go.....now you know what '1st Saturday' means!

Initially I thought the one way distance to the Subway shop on Tippecanoe was about 10-11 miles, but it had been a while since we have done the ride from Rancho Jurupa Regional Park.....it is actually 13 miles each way.  The realization that it was further than I had related to TLE hit me as we reached the end of the SART* at Waterman, and my Garmin said we had covered 11.5 miles, and we still had 1.5 miles to go to the Subway....I confessed my miscalculation to TLE right away, and she said 'No problem'........she is very gracious.  I don't think she thought she would be sitting on a bicycle seat for 26 miles Monday....maybe 20-22..... 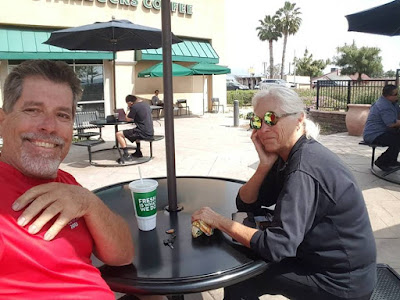 .....the thing I love about this particular Subway is there is a large outdoor area with a plentiful supply of tables with umbrellas for alfresco dining.....this is a kind of food court within an outdoor mall.  We got our footlong Club and headed outside to enjoy the early afternoon air (we had arrived at just before noon).  By the time we finished the breeze had picked up and the air temperature seemed to have cooled, so I donned a long sleeve riding jersey I had put into one of the panniers for just this situation, and we began our 13 mile ride back to Rancho Jurupa Regional Park.  There was a little bit of a headwind on the return trip, but we still covered the 26 miles in just over one hour and 45 minutes of riding time averaging 14.2 mph.....my Garmin showed I had burned about 1600 calories!

Later in the afternoon we decided to stow the patio awning as the weather guessers were predicting Santa Ana winds in the 30-40 mph range Monday evening through Tuesday afternoon......'they' are right about 50% of the time......better to be proactive about stowing the awning at time of your own choosing, rather than having to get up at 2 am in the morning and do it under duress!  Included in the proactive stuff was also putting away all the patio furniture and the tandem.

The tandem ride was the centerpiece of our '1st Saturday'........TLE did go shopping at Trader Joe's, but I stayed home and took a nap.  We watched the current episode of '24: The Legacy' and were in bed before 11 pm.


We appreciate every purchase made clicking on this Amazon Affiliate link!

Posted by Whatsnewell at 7:57 AM