7:34 am - PDST - Thursday - 53º F, humidity 67%, wind 1 mph out of the east.......blue, cloudless skies.....much cooler than Wednesday!  Today we roll our wheels northward to Ventura and a week right next to the Pacific Ocean on Ricon Parkway, one of our favorite, all time dry camping spots!

Wednesday was forecast to be a warm one, and it had all the earmarks of one early on so TLE and I decided if we were going to workout we needed to get to it early.  I headed out on a 17 mile bike ride, which included a summit of Mt. Rubidoux, my first on my bike this time around.  Originally I was just going to head to the SART* bike path and head south to it's current terminus, but as I was crossing the bridge which spans the Santa Ana River I decided to take a ride around Fairmont Park, then ride to the top of Rubidoux.  The path to the top is like a paved one lane road and runs anywhere from 3-6% grade for about 2 miles.  Climbing this grade kind of gives me an indication of where I am at conditioning wise.  Back in 2014 I was averaging close to 10 mph for the entire climb when my conditioning was at its highest.....this time around I was able to average 9 mph with ease....I could probably have pushed it and gotten closer to 10 mph average, but I didn't feel like suffering too much on this beautiful, windless, clear blue skies day....... 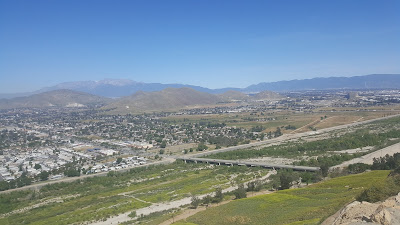 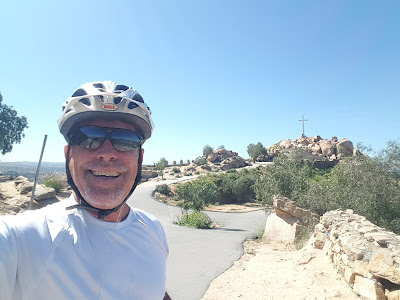 ......I reached the top, took a couple of pix and then began the plunge back to street level.....as I merged on to the SART* again I decided to ride south a few miles before making the turn around to head back to Rancho Jurupa Regional Park.  I arrived back just before 12 pm to find TLE doing her daily weigh in, so I joined her.....great news!  I am now officially under 200 lbs again.....199.3!  I'm not going to give out numbers on TLE, but suffice it to say she is maintaining her weight loss, and within a few lbs. of reaching her short term goal.

Once I took a shower we jumped into the VW to head over to my son's office for one last mail run.....I had one package, but the much awaited letter from our Elk's Lodge with my membership renewal card in it had not arrived so I looks like we'll be making a stop at the Lodge on our way out of town.  The secretary told me that if we had not received the card by Thursday she would issue another when she comes into the office at 11 am.....it's just a few blocks off our travel route to Ventura so it's all good!

We were back home by 3 pm, and we were both beginning the task of putting stuff away (stow the patio awning, put away the awning mats, solar lights, sun screen, straighten up the trailer for VW insertion, etc.). It always takes me a couple of hours with a break thrown in here and there to get it all done, but I've got it down to a 'science' and it all goes pretty smoothly.  Most people who look in the trailer when I am using it for my 'man cave' have a difficult time believing the VW actually fits in there, and, frankly, I don't blame them for their skepticism.

I finally finished.....well mostly.....around 5 pm and took a short break before getting dressed to go out to dinner with my son Tim, his fiance Laila.....we always meet them at least once each time we are in town at Pepito's Mexican Restaurant.....it's kind of 'our place'.  We arrived a little after 6 pm, and they about 2 minutes later......they are always on time, or early....I love punctual people!!  We had a lovely 90 minute dinner.....all too short......before it was time to say our 'until next times'......their wedding date is just a few days over 6 months away, and we are so looking forward to it!

We watched the current episode of 'Survivor', and then a recorded episode of the latest 'Bering Sea Gold' before heading off to dreamland around 10 pm......now, time to get ready to roll!

We appreciate every purchase made clicking on this Amazon Affiliate link!
Posted by Whatsnewell at 8:26 AM