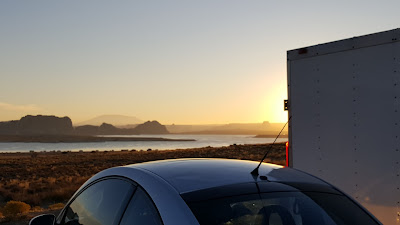 8:17 am at Lone Rock Beach....the sun is just behind the rear of the trailer right now

Our Jello plan was to be on the road between 10 and 11 am Wednesday, and we were right on schedule to leave a little after 10 am....not bad.  It was still under 40º F at 10 am......BRRRR!!! Well, Mr. Jello reared his head and said..."Not so fast!".....as we always do, TLE was standing behind the trailer to check to be sure the turn signals, and brake lights were working......I turned on the left turn signal and got the 'thumbs up' from her, but when I turned on the right turn signal I got the 'thumbs down'.....rats!  We've had this happen before, but it has been a year, or more.  In the past it was just a matter of checking the connections of the right turn signal relay, and then they would start working.  So, I walked to the back of the Newell and opened up the door for the rear electrical panel and saw there was a much bigger problem......on of the wires coming out of the relay was FRIED.....all the insulation had melted off of it, and then I opened the right rear engine bay door and found another long wire (about 24") that was toast also.  "Okay" I'm thinking.....I have extra wire and connectors and can fix this.  Well, after replacing both wires and all the connectors I still could not get the turn signal to work.  After about an hour I decided we would just head down to Lone Rock Beach where we would be near an automotive supply store and continue my troubleshooting there.  I figured all we had were left turns all the way to Lone Rock, and the left turn signal was working.

While I was tilting our solar panels, and dialing in our DirecTV signal I looked up to see a 2002 Newell (2 slides) just parking......it is so rare to see another Newell, let alone to find ones self parked just 100 feet away from one in such a remote place...... 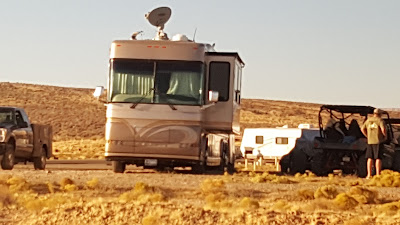 .....we both noticed the other's rig almost immediately, and began walking towards each other......the owner's name is Mussy (sp?), and he is a member of our Newell Gurus forum.....and the world gets smaller!  TLE and I chatted with him for about 10 minutes before we bid each other adieu and returned to our set up routines......very, very cool!

We were last at Lone Rock Beach in March of 2015.  Back then Lake Powell, on which shores we sit, was at it's lowest point since the Glen Canyon Dam was built.  I have retrieved a picture from that time period and put a red arrow which points to a dark line on Lone Rock.....in the picture I took this morning you can see that the water level is almost to that dark line on the rock now....... 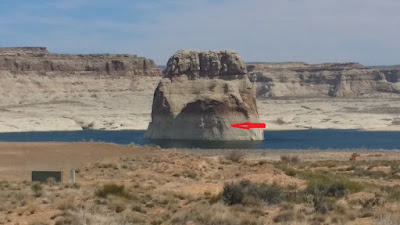 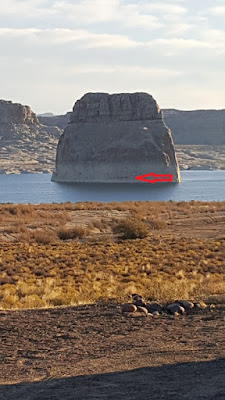 ......it appears that the lake level has risen by close to 10 feet in the last 31 months.....has it really been two and a half years since we last here?

The terraced pad where we usually park when we are here at Lone Rock was a little crowded this time around , but we were able to 'shoe horn' ourselves into a nice spot which will afford us some privacy...... 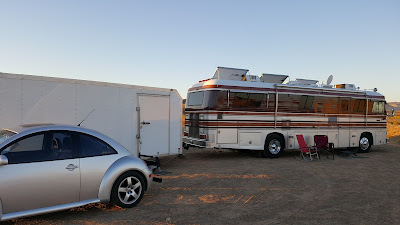 ......by 5 pm we were sitting outside with cocktails enjoying the early evening view of Lone Rock and Lake Powell.....it's as if we were just here yesterday........ 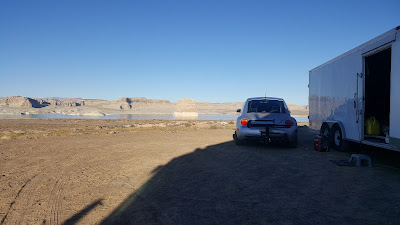 .....a little after 6 pm we went inside to watch game two of the World Series.....it was a great game that the Dodgers should have won, but their bullpen failed big time....the game was tied 3-3 going into the 10th when the Astros hitters hit back to back homeruns to take a 5-3 lead.....the Dodgers responded in the bottom of the 10th with a solo homerun, and then a 2 out single to score a man from second to once again tie the game.  In the top of the 11th the Astros added two more runs with a two run homerun to go up 7-5.  In the bottom of the 11th the Dodgers got another solo homerun to pull with in one run, but is how it ended......it's going to be an interesting series!

When you shop Amazon, please use our link (below) to access their website.......we will appreciate every purchase you make using our Amazon Affiliate link, and  remember, using our link will not add one penny to your purchase, plus we will receive a small commission.
Posted by Whatsnewell at 9:07 AM