Once again, upon awaking, I checked the state of charge for our house batteries on our Blue Sky monitoring system to find them at 89%......by 1 pm they were at 100%.  The combination of having the four solar panels now, and the ideal weather conditions (not too cold at night, and not too hot during the day) make for a perfect solar charging scenario.  Low temps in the 40's at night means the battery discharge will not be great (cold temps cause any batteries to discharge more quickly), and moderate daily temps in the 70's means there will not be too much heat which tends to inhibit the charging efficiency of solar panels.  Of course, what we are always chasing in this life style is the perfect weather......t-shirt, shorts and flip flop weather.......how nice that it is also the perfect weather for solar panels and boondocking!

We had no big aspirations for Sunday.....there is no NFL football being watched, so once again I had Sunday free.  I chose to finish Book 5 of Steven King's 'The Dark Tower' 7 book series.  I first discovered this series back in 2004, or 5.....I was sitting in an airport waiting for a flight.  Back then I always made sure I had a book to read on the plane as I really hate flying.....it's not that I'm afraid of flying, but I get bored, and reading helps pass the time more quickly.  Anyway, there I am needing a book before it's time to board our flight to Wisconsin and I spy a small store across the concourse which has newspapers and books, so I walk over to see what they have that might interest me.  I like reading westerns, and I immediately saw a book entitled 'The Gunslinger' with a cover picture of a cowboy with a gun in his hand.....okay, who it the author?  I turn the book over and it says Stephen King and there is a picture of Stephen King.  I am not a fan of Stephen King, but I was intrigued.....he wrote a western?  Well, I bought book and began to read it on the flight to Wisconsin......as one might expect with Stephen King involved, this is not really a 'Western' in the 'Western Genre' sense.    I also quickly discovered that it was not just an isolated book, but the first book in a seven book series called 'The Dark Tower'.  As the flight progressed I became captivated by the premise of the book, and series.  I finished the book within a day of landing in Wisconsin......I had to find the next two, or three books to keep reading so I drove over to the local Barnes and Noble and found they had books 2, 3 and 4 in paperback so I bought them on the spot.  To make long story a little shorter I finished reading book 6 just after we returned home from our Wisconsin visit, and found out that Book 7 had just been released in hardback (how timely for me, no?)......I found a copy at a local SoCal Barnes and Noble and purchased it for $60.....I had to see how it ended, right?  Well, that is the tale of my 3 week obsession with the 'Dark Tower' series back in 2004.

So, fast forward to late last year when I heard the Dark Tower series was being made into a movie/TV series, and then I found out my grandson, Elijah (Kate's son), was reading the series, so I decided to read them again so he and I could talk about them when we were in town periodically.  I've been re-reading them quite slowly, and feel like I am getting more out of them this time around.....Kate says he is in the middle of Book 5 - 'Wolves of the Calla', which is the book I just finished.  I started to ready Book 6 - Song of Susannah around 2 pm when TLE said......"we need to take our walk"......uh, oh yeah!  So we changed our clothes and set out on a 4.2 mile walk at a fast pace....I think we averaged around 16 minutes, 23 seconds a mile for that distance, or about 3.7 mph.....WOW, no wonder I was a tad beat when we got back!

By the time we returned, and cooled down it was closing in on 3:30 pm......TLE had mentioned earlier that we should go out for dinner, which we have not done in quite a while, so around 4 pm we jumped in the VW and headed into Page to El Tapatio (4 stars on 483 reviews) Mexican Restaurant for an early dinner.....what a great decision that was..... 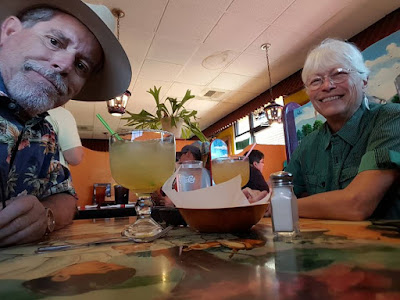 ....we both ordered their Jumbo 'Original' House Margarita......and to accompany that wonderful Margarita I ordered a combo plate with two Chile Relleños.  TLE ordered their Pollo de Diablo....... 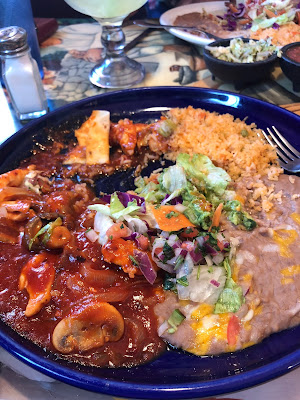 TLE's Pollo de Diablo and my dish in the background

......it's good to be back in Arizona where it is easy to find very good Mexican food!  We would wholeheartedly agree with the 4 star rating.  By the time we finished we were stuffed!  We were home by 5:45 pm putting on looser fitting clothing and, for me, taking a nice long nap!

We watched game 5 of the World Series in which the Dodgers blew a 4 run lead, a 3 run lead, and a 1 run lead.  They entered their last at bat (top of the 9th) trailing the Astros 12-9, but managed to score three to tie the game at 12-12.  The Astros ultimately won the game in the bottom of the 10th 13-12......the pitching for both teams was abysmal, as one might expect with 25 runs being scored, and 7 home runs.  Naturally I was an unhappy camper at just before midnight when the game finally ended.  But, as I have said before, it's only sports, not real life.

Going back to 'no NFL football being watched'.....it has been about a month since I stopped watching the NFL, and cancelled my 'NFL Sunday Ticket' (DirecTV) due to the disrespect being shown by NFL players for our flag, our country and military entirely based on a false premise.  I have not watched a game since September 25th, and I am gradually getting used to having my Sunday's back to do other things.  Life is good, and the 'world has moved on' as Roland Deschain (Dark Tower Series main character) would say.

When you shop Amazon, please use our link (below) to access their website.......we will appreciate every purchase you make using our Amazon Affiliate link, and  remember, using our link will not add one penny to your purchase, plus we will receive a small commission.
Posted by Whatsnewell at 9:02 AM