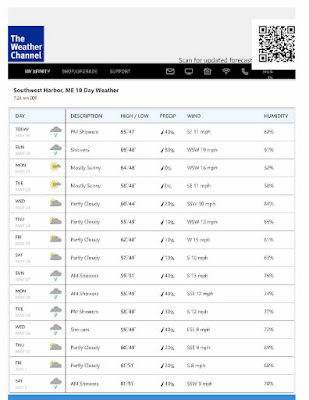 I reported for work at 8 am Friday.  For my four hour shift I did a little of everything.  Each of the 14 cabins here has its own gas BBQ.  After a couple of seasons they begin to wear out, and must be replaced.  Along with Todd, Alex and I helped inspect each one, checking to see if it had a full propane tank, and if it would light.  About half of the BBQ's failed the test and were loaded in the back of Todd's truck and taken to the barn where we will, in the future, remove some of the common parts saving them to repair the remaining ones, if and when they need repairing.  In the mean time we will be taking delivery on 7 new BBQ's later in the week.

Once that was done Alex and I headed for the group area to finish the cleanup which had been started a few days earlier.....picking up big sticks, and then using leaf blowers to  corral the leaves into large piles so they can be transferred to the large leaf compost pile in the back of the property.

We loaded all the sticks and stick debris into the 'dumper' at the rear of the electric 'Club Car'.  In all we hauled two cart loads of sticks and debris to the stick pile.  In between the first and the second load Alex and I helped Todd move a few refrigerators around before returning to the group area clean up to haul the second load of sticks.

Once the sticks were removed we each donned a leaf blower and began to 'herd' the leaves into large piles.  By this time it was 11:20 am and I had just 40 minutes left on my 4 hour shift.  The last 40 minutes flew by quickly and I left Alex to finish creating the leaf piles which will be moved Saturday, or Sunday.  We have just one week left until the official opening of Smuggler's Den for the summer season.

Speaking of 'summer'.....the weather right now is anything but 'summery'.....while we are getting our fair share of sunny days the temperatures have only climbed out of the 50's one day since we have been here, and over the next 14 days it looks like there may be another 4, or 5 days which may creep into the low 60's, but there are at least 7 days with rain forecast.  Personally, I'm enjoying the cool weather.  I know it will get warmer soon enough, and there will even be days later this summer when I will long for these cool, bug free days of May.

TLE worked until 2:30 pm Friday cleaning cabins with Sam, and that is where we (TLE and I) will be working on Saturday.  They managed to deep clean 4 of the 14 cabins with just two people....we'll have four people, hopefully, on Saturday so we should get a lot further along in the process by the end of of the day.

When we were in Ellsworth on Tuesday we bought a couple of filet mignons to grill later in the week, and 'later in the week' had arrived.   It was a very nice evening with no wind so while I heated up the Sea-B-Que I also laid wood for a fire.  While the steaks grilled we sat by the fire sipping some Pinot Noir.  About the time I flipped the filets two of our neighbors for the summer, Linda and Terry, came over to introduce themselves.  They keep their 5th wheel here at Smuggler's Den during the summer and come most weekends, and on occasion will stay a week at a time.  They are very nice people and we will enjoy interacting with them throughout the summer!

The steaks came out wonderfully.....a perfect medium rare.  TLE added a side mashed potatoes.  We sat by the fire eating our dinner......our first meal outside.....enjoying the early evening air.  A nice way to end our first week in Southwest Harbor!


When you shop Amazon, please use our link (below) to access their website.......we will appreciate every purchase you make using our Amazon Affiliate link, and  remember, using our link will not add one penny to your purchase, plus we will receive a small commission which helps defer the costs of producing this blog each day.
Posted by Whatsnewell at 4:50 AM