You will recall we arrived in Sioux Falls with a strong east wind buffeting us to and fro on the Interstate.  That wind was the precursor of rain, but in spite of the rain having arrived around noon Sunday, the wind continues almost unabated now for 48 hours.  We are thankful we are parked with the nose of our coach into the wind otherwise we would be rocking and rolling.  Of course, this is always the risk one takes when one moves too far north too soon in the year.

Our primary reason for venturing as far north of Sioux Falls this early in the Spring was to retrieve our new rear bumper, but in addition to the bumper, coming back to Sioux Falls has enabled us to spend more time with our Newell friends Todd and Dawn.  Also, as is the custom in our Newell community, we help each other with projects on our coaches.  For Todd there was the need to replace two failing electric heaters in his coach with new ones. 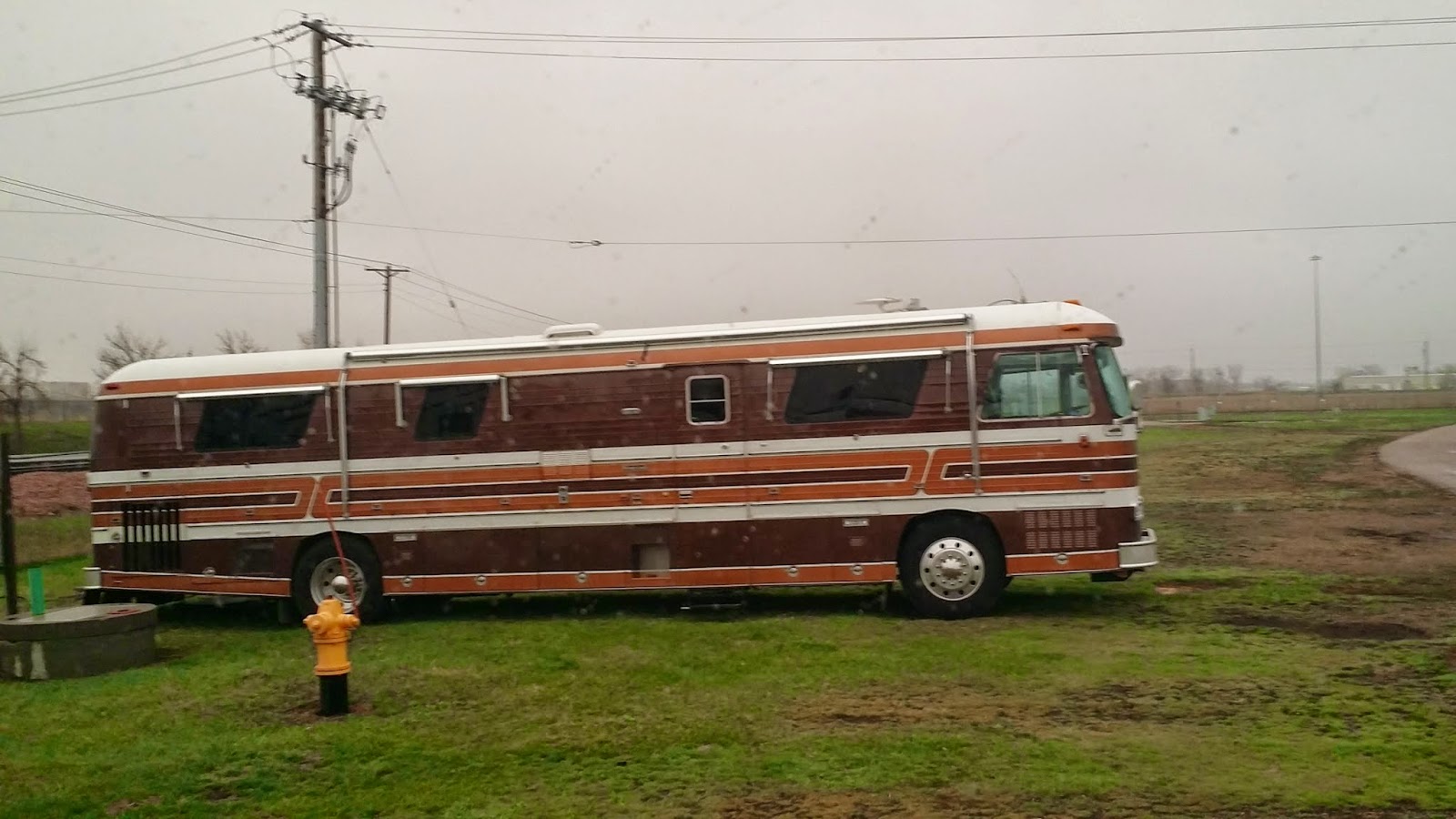 Before Todd came over to the fairgrounds Sunday with his coach I began work on removing my old rear bumper.....this is pretty much a one man job.  Just after Todd arrived with his Newell the forecast rain began to gently fall essentially ending my outside work for the day, but I did get a lot accomplished.  The old bumper is off, and the right rear corner is now a little closer to its original shape....you can tell that a little more by looking the first picture below.  When it stops raining in the next couple of days I'll begin attaching the diamond plate to each corner, then install the new bumper.  The only reason I am putting diamond plate on each corner is just to give the rear of the coach a symmetrical look.  There is no damage to the left corner, but it would look odd, at least to me, if there was only diamond plate on the right side.

The old bumper is removed!

The diamond plate cute, shaped
and ready for installation

A note of explanation....some have asked "what happened?" to the rear bumper and rear corner of our coach?  Well, when we purchased our Newell in March of 2008 the right rear corner of the bumper had some minor damaged that wasn't too noticeable and we were content to leave it as is, especially when we found out that Newell wanted $700 for a new bumper.  However, two summers ago (July of 2012) we were arriving at an RV park near Marblemount, WA when I overshot the entrance.  I couldn't back up at the time as we were on a two lane country road with traffic behind us.  After the traffic passed I decided to take advantage of a side dirt road with a very wide apron and attempted to back into the dirt road to make a 3 point turn.  The Lovely Elaine offered to get out and help me back up, but I replied "It's okay, I've got this"......the words were still hanging there in the air when I heard TLE gasp....."you just pinched the trailer!".  That mistake further damaged the bumper, but also caused serious damage to the aluminum skin on the right rear corner.  I was able to pound out the damage and covered the tear in the aluminum with some aluminum foil tape.  We were still content to live with the damage, but when we found the Newell bumper on eBay for $62.50 we jumped on it and bought it, and devised the plan to cover the damaged corner with diamond plate.  So there you go....that's the back story.

Around 5:30 we drove over to Todd and Dawn's home for dinner.....Dawn is a wonderful chef by the way......for swordfish, steak and some healthy sides.  We talked until almost 9 pm before heading home for the evening with big smiles on our faces.

Thanks for stopping by!
Posted by Whatsnewell at 8:49 AM