I started off Saturday watching some English Premier soccer....Cardiff vs. Stoke which ended in a 1-1 tie.....each goal was the result of a penalty kick.  This is one of the things I am loving about retirement......I have time to watch soccer......okay, I "watched" a lot of soccer as a center referee for a few decades, but never really had time to sit down on a Saturday and watch English Premier, or any other professional matches for that matter.  I still miss being out on the pitch on a Saturday morning running with the young bucks, but I also like not having to get up at 5 am in order to be on the pitch for an 8 am match.

Even though it only got down to 43 degrees Friday night it still takes a while for it to warm up at 7,145' elevation, but eventually it did and we decided to drive into Blanding to spend a few hours "junking" and touring a couple of local museums.  There was still a hint of rain here and there, and we didn't want to do anything that might take us more than a 100 feet from shelter.

We found two thrift stores and even though kind of small, they both had quality items in stock.   Ultimately TLE was the only one who came away with anything......a couple more paperbacks.  I'm not sure where she is storing all the books she has bought lately, but there still seems to be room on her side of the bed for a few more books.  Me, I prefer to read books on my Kindle.....it takes up very little space.  There was a great set of Lynx golf clubs which I could have had for the paltry sum of $75 (probably worth close to $400), but I resisted the temptation.....I don't play enough golf to justify a set of clubs......yet.  I used to play golf a lot in my 20's and 30's, but when we got involved in youth soccer there was really no time for golf anymore.  Someday I will get back into it, just not now.

From there we headed for a couple of local museums, but on our way stopped off to browse through the local TruValue Hardware store......I love local hardware stores.....they even had free popcorn that we munched on as we walked around the store. 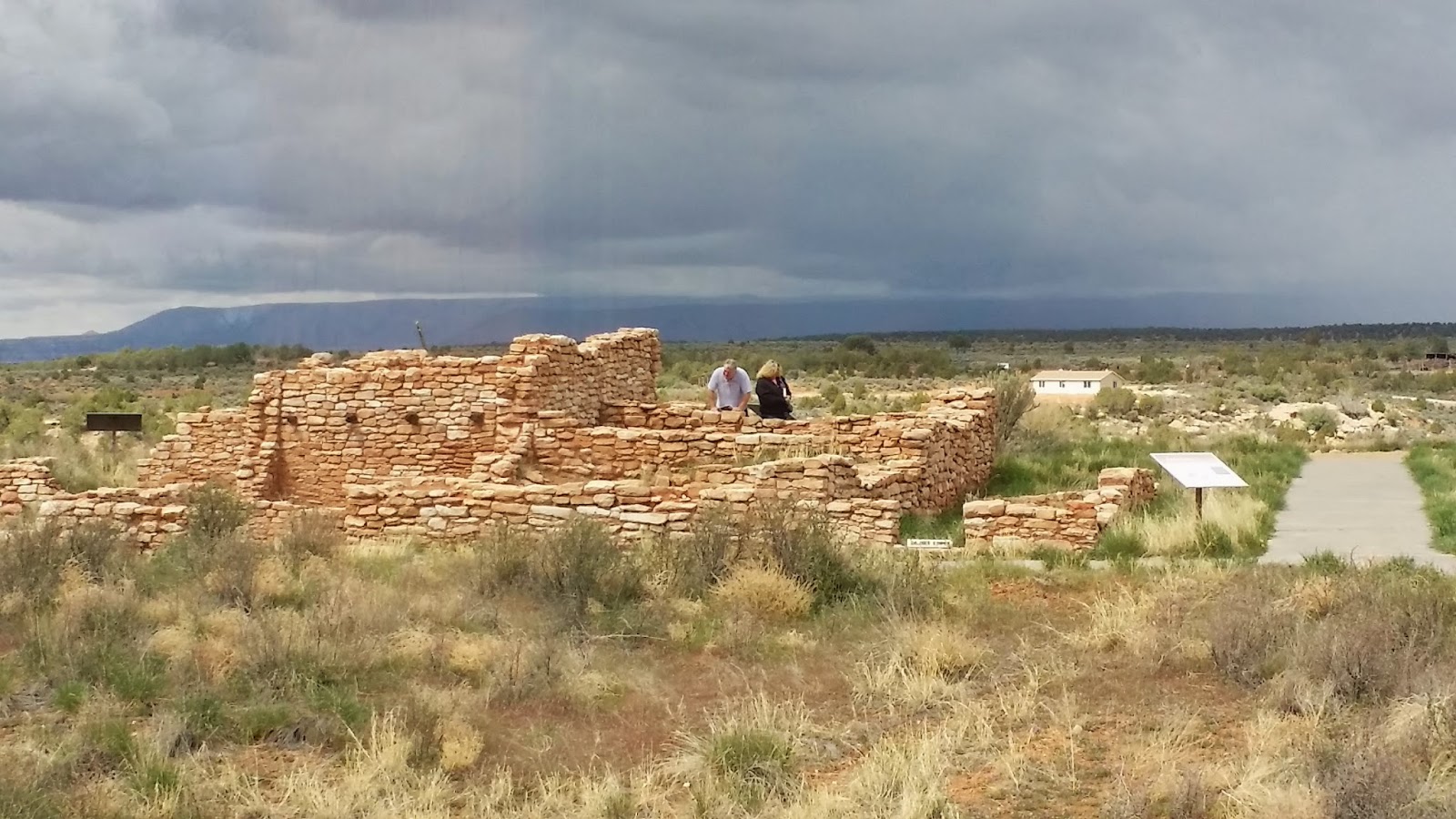 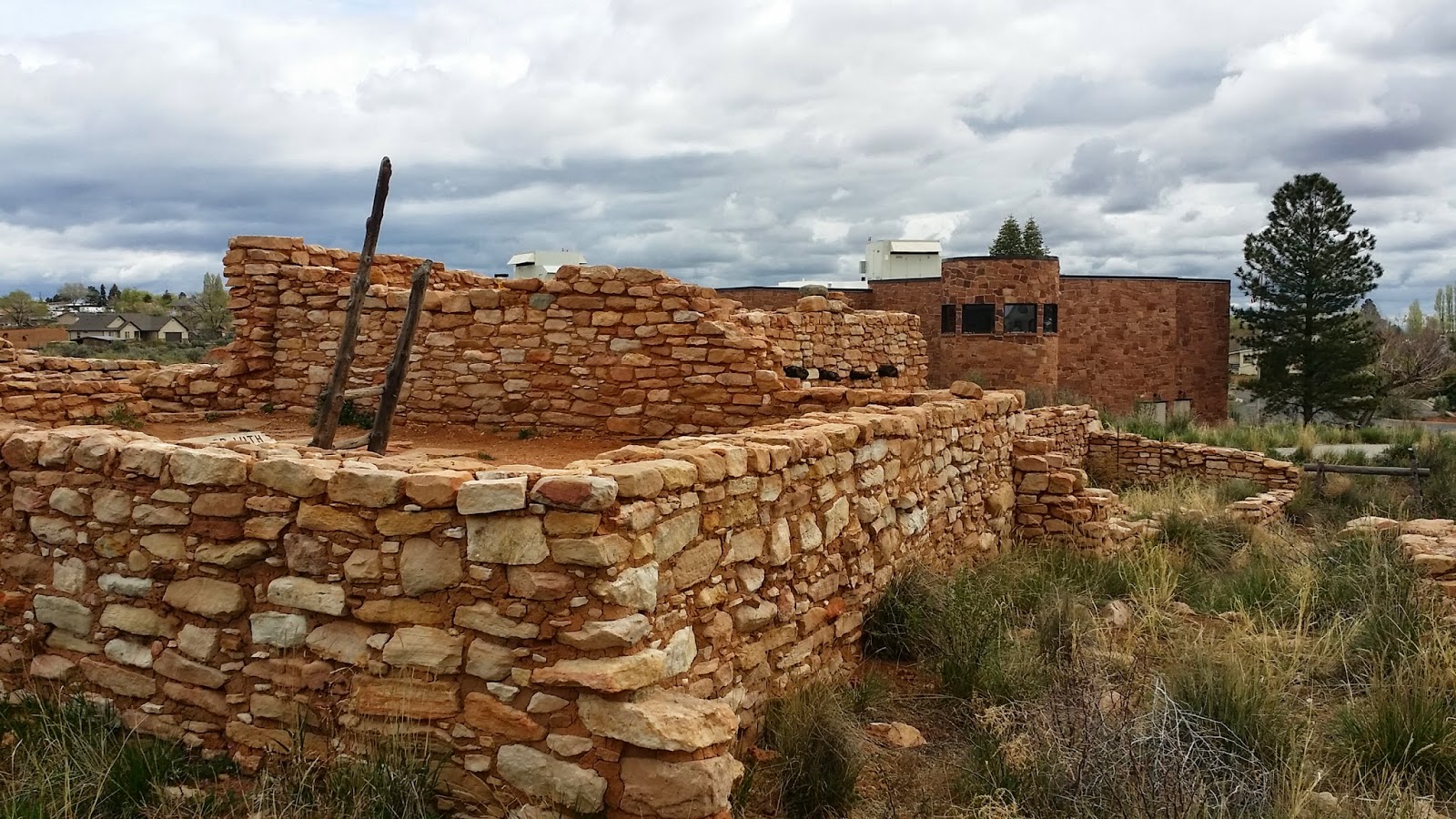 They have re-constructed a 1,000 year old Kiva that you can climb down a ladder and experience a little of what it might have been like to live in those times......they were apparently a short of stature people. 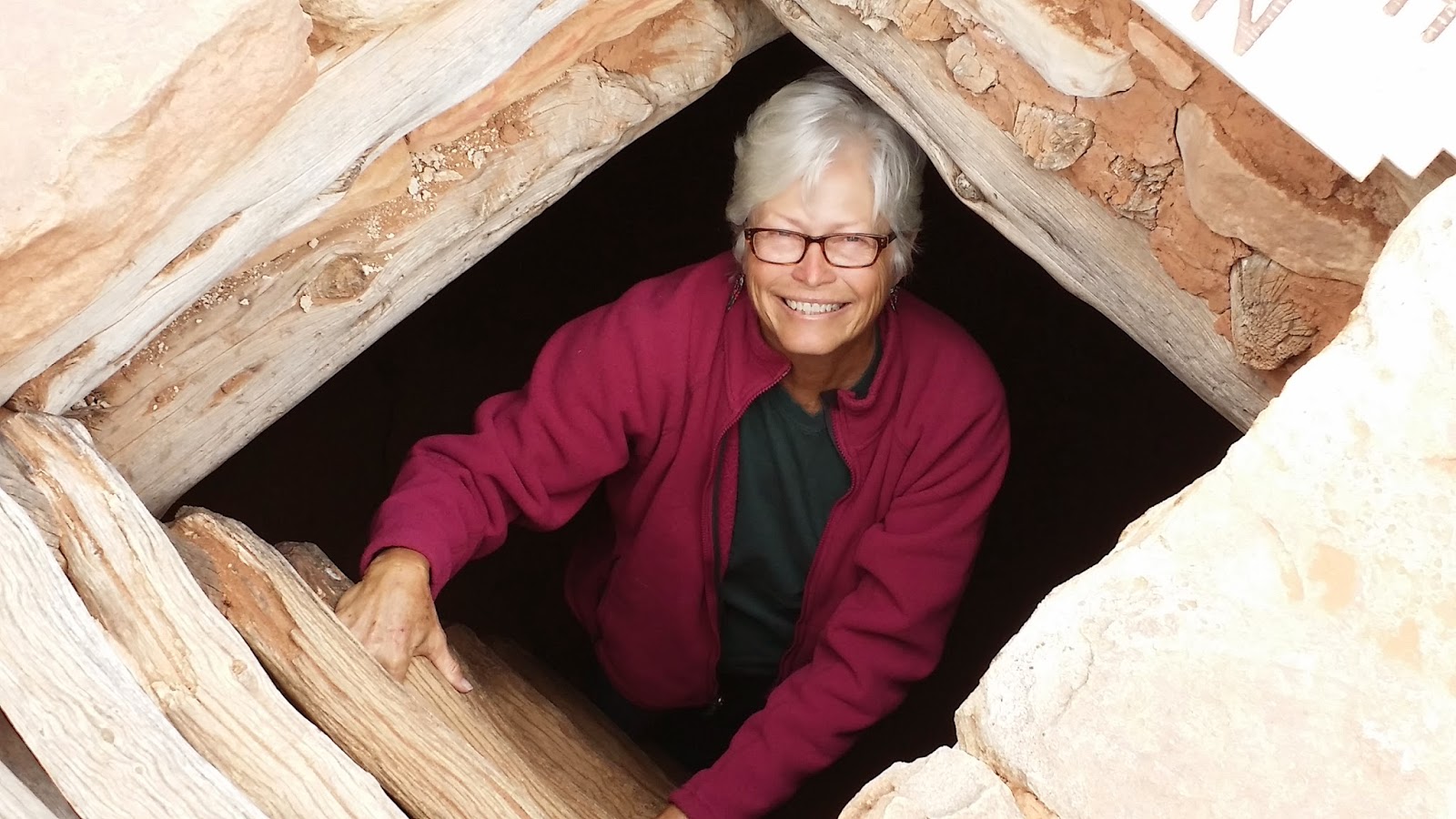 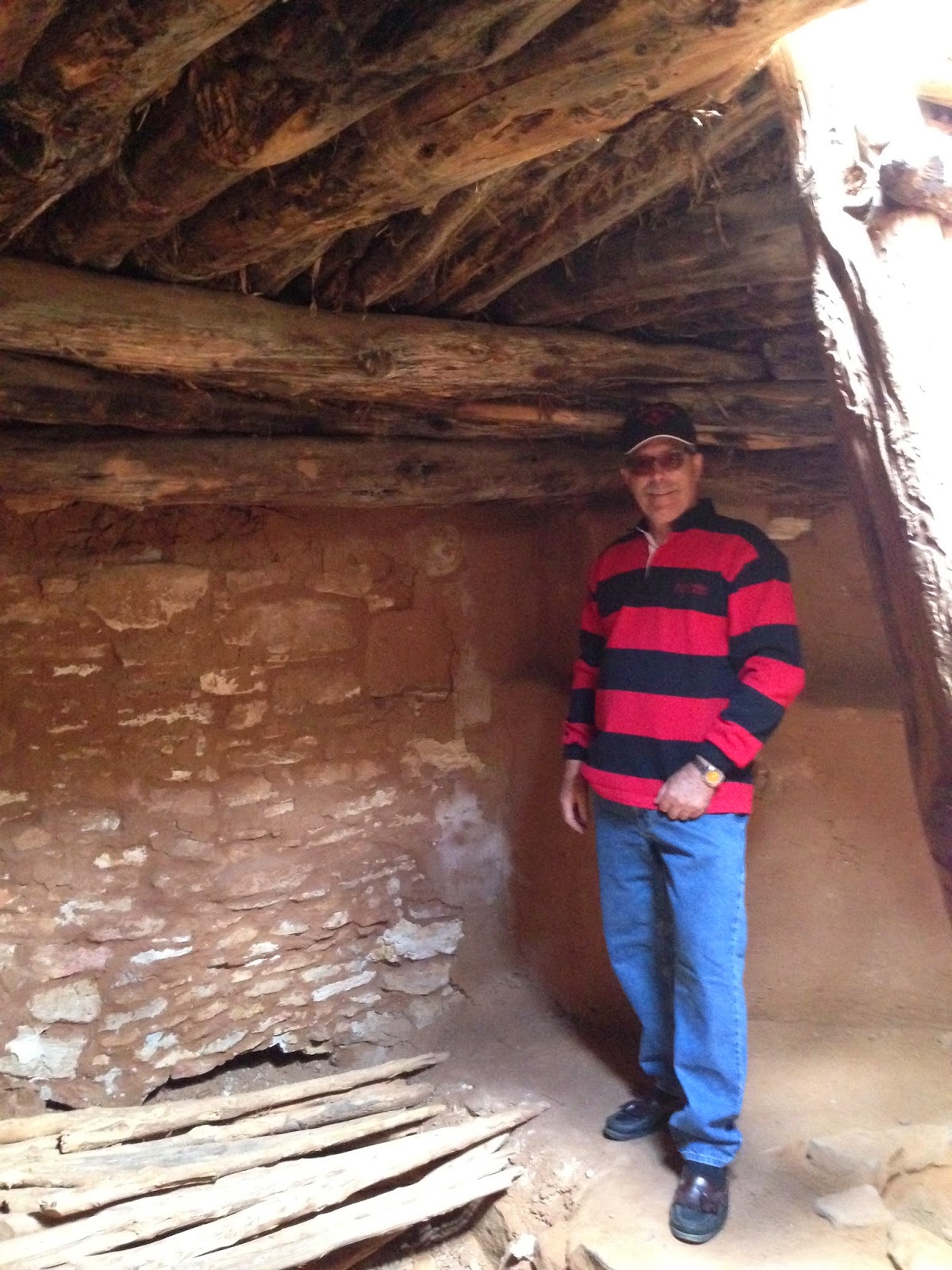 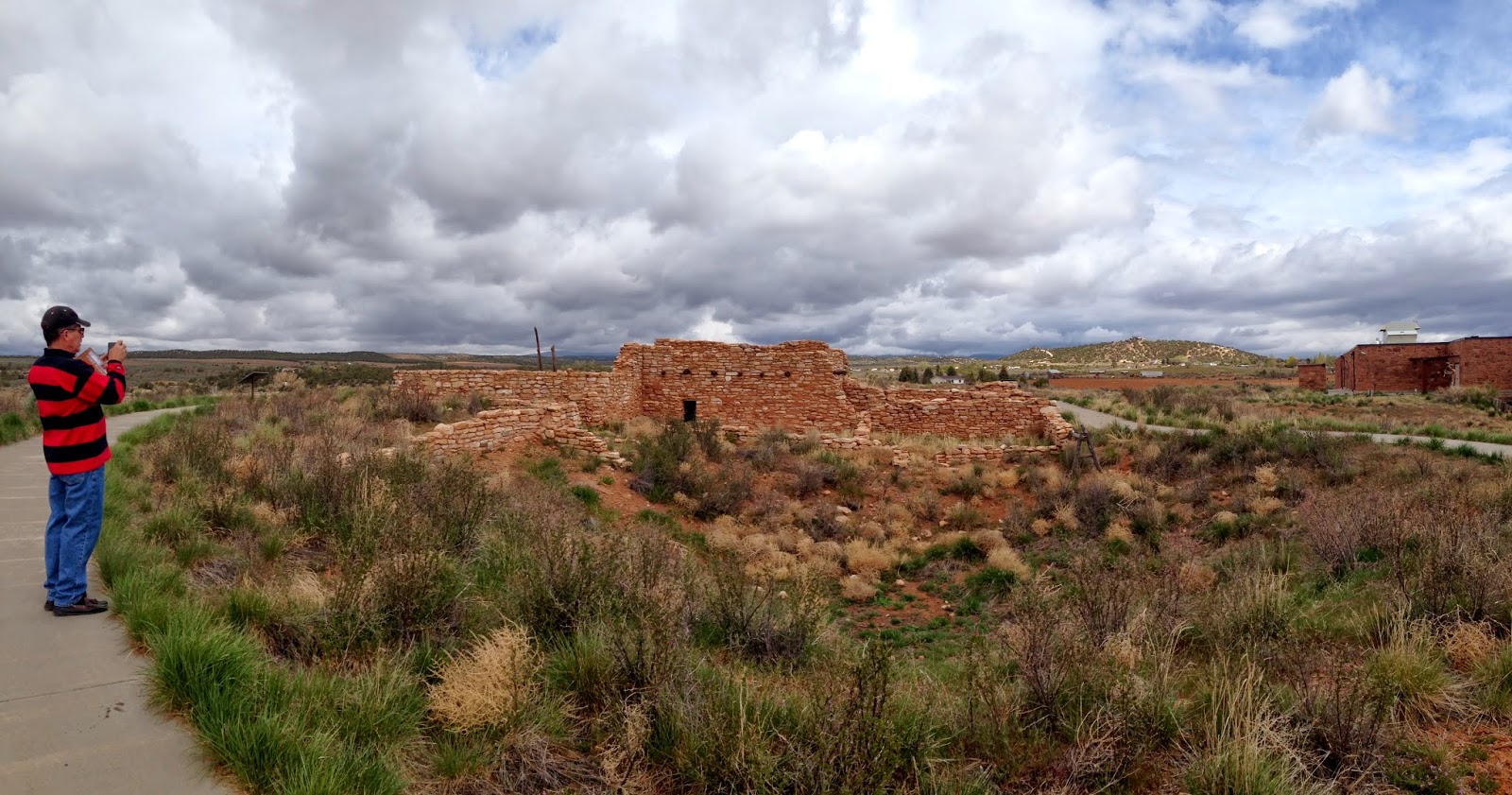 The admission price for the museum and grounds if $5 per adult.....a fair price for what they had to offer.  We actually spent quite a bit of time in the museum part of the park.

Next up was the Dinosaur Museum, which did have some interesting fossils, but seemed to be devoted more to the movie industry's depiction of dinosaurs.  However, the admission price was only $2.50 for seniors, so we took a flyer and went in.....they had a few cool dinosaur skeletons, and some petrified tree trunks, but beyond that it was just a little too"kitschy" for me. 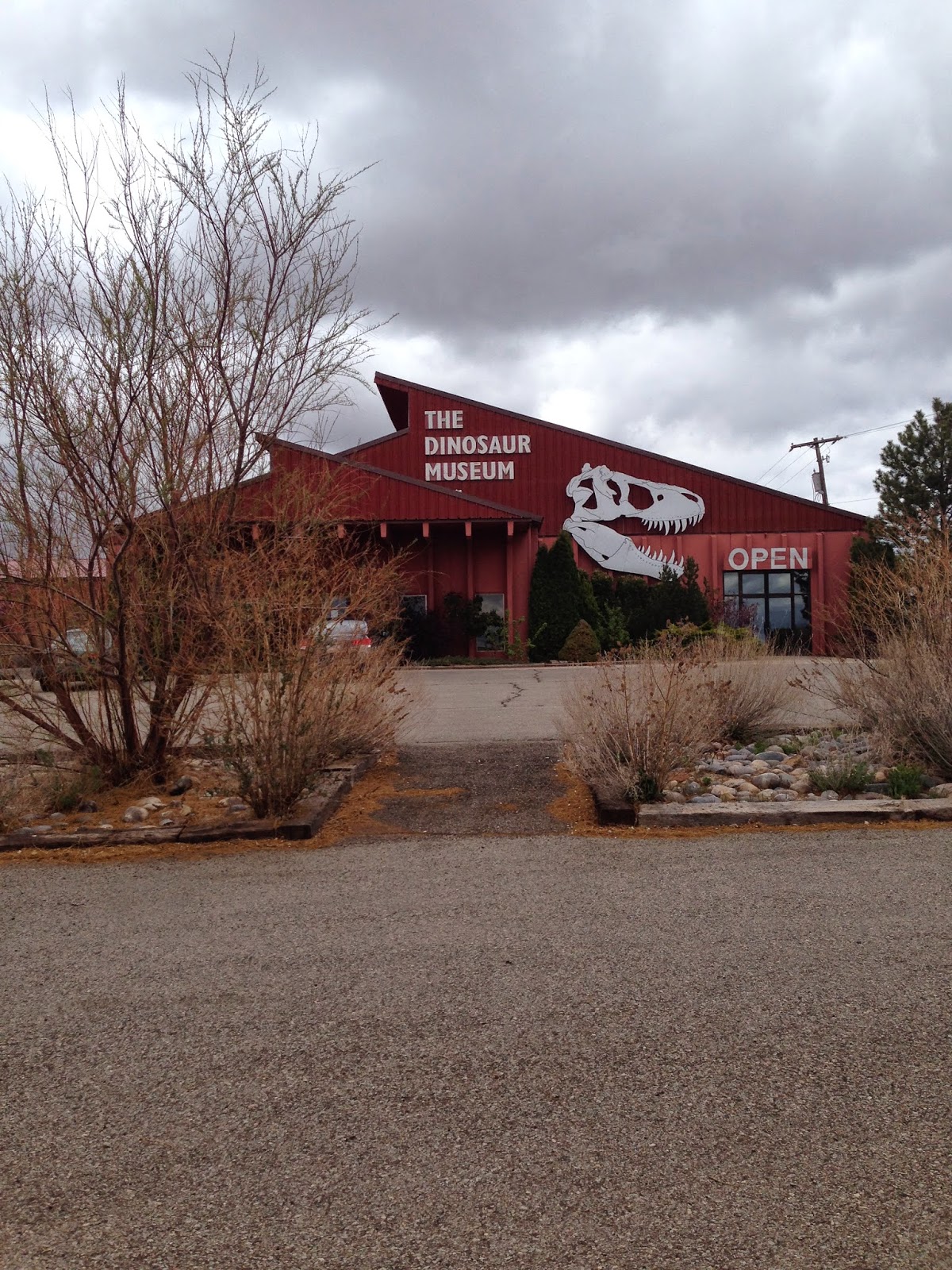 By the time we finished it was closing in on 12:30 and we were both getting hungry.  TLE found a cool little hamburger place with good reviews called Patio Drive In.  They earn a 4 star rating from Yelp on 10 reviews, 4 stars from Urban Spoon on 23 reviews, and 4.5 stars from Trip Advisor on 16 reviews.  That seems about right to us.....the hamburgers were delicious. 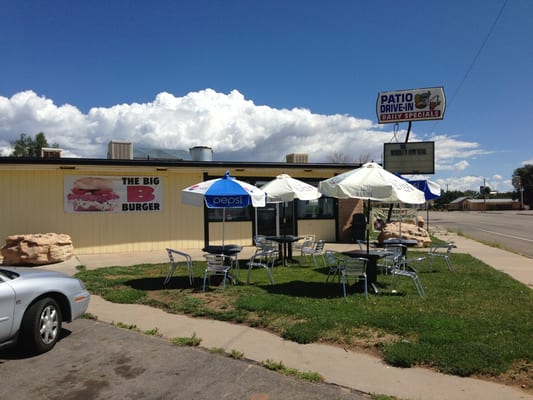 They have outdoor dining, but it was
toooo cold to sit outside this day 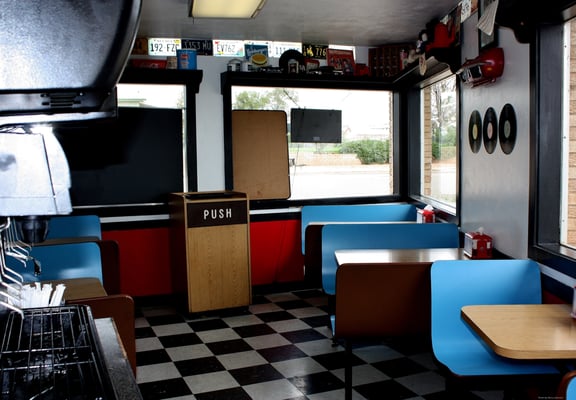 We sat right back there in the corner

We got back home around 1:30 and settled in for the afternoon to read.  I, of course, took a nap, but made significant progress on the book I am reading......before I knew it was 4:30, and the day was ebbing quickly.  I needed to straighten up the trailer for re-insertion of the VW on Sunday morning and decided to do it while it was still kind of "warm".

Around 7 I snapped this great picture of the sun setting and a little rain falling in the distance.

Thanks for stopping by!
Posted by Whatsnewell at 6:32 AM