Seems hard to wrap my mind around it being June already......5 months of 2014 are now history, and the summer season here in SLT* is ramping up.  While it is not nearly as congested as it was over Memorial Day weekend there is a noticeable increase in the local population since then.

What better way to spend 2nd Saturday than taking a bike ride up to Meyers again, but this time on the Cannondale road bikes.  Once you hit the bike path the views get pretty spectacular as we pass by Lake Tahoe Golf Course..... 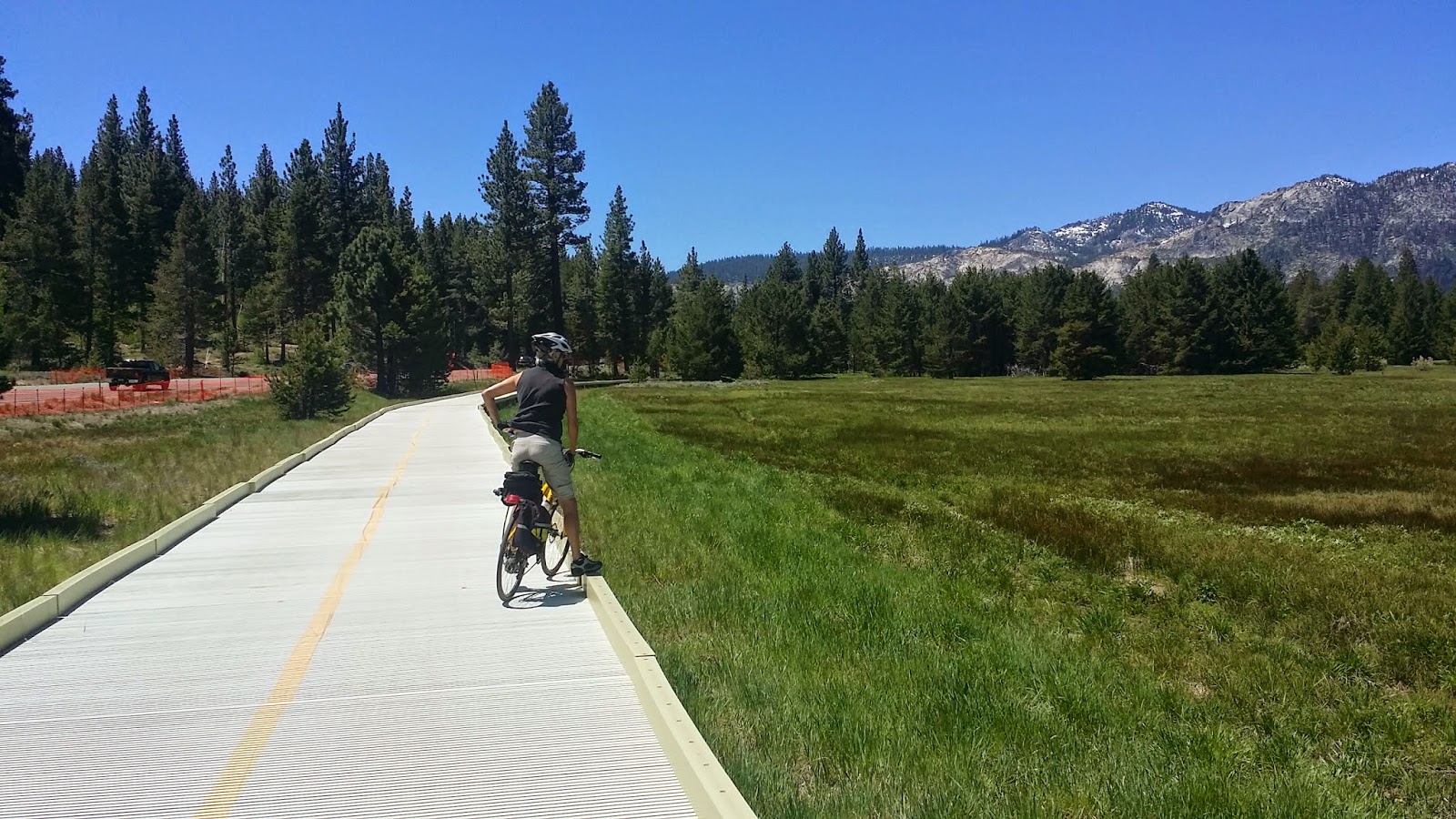 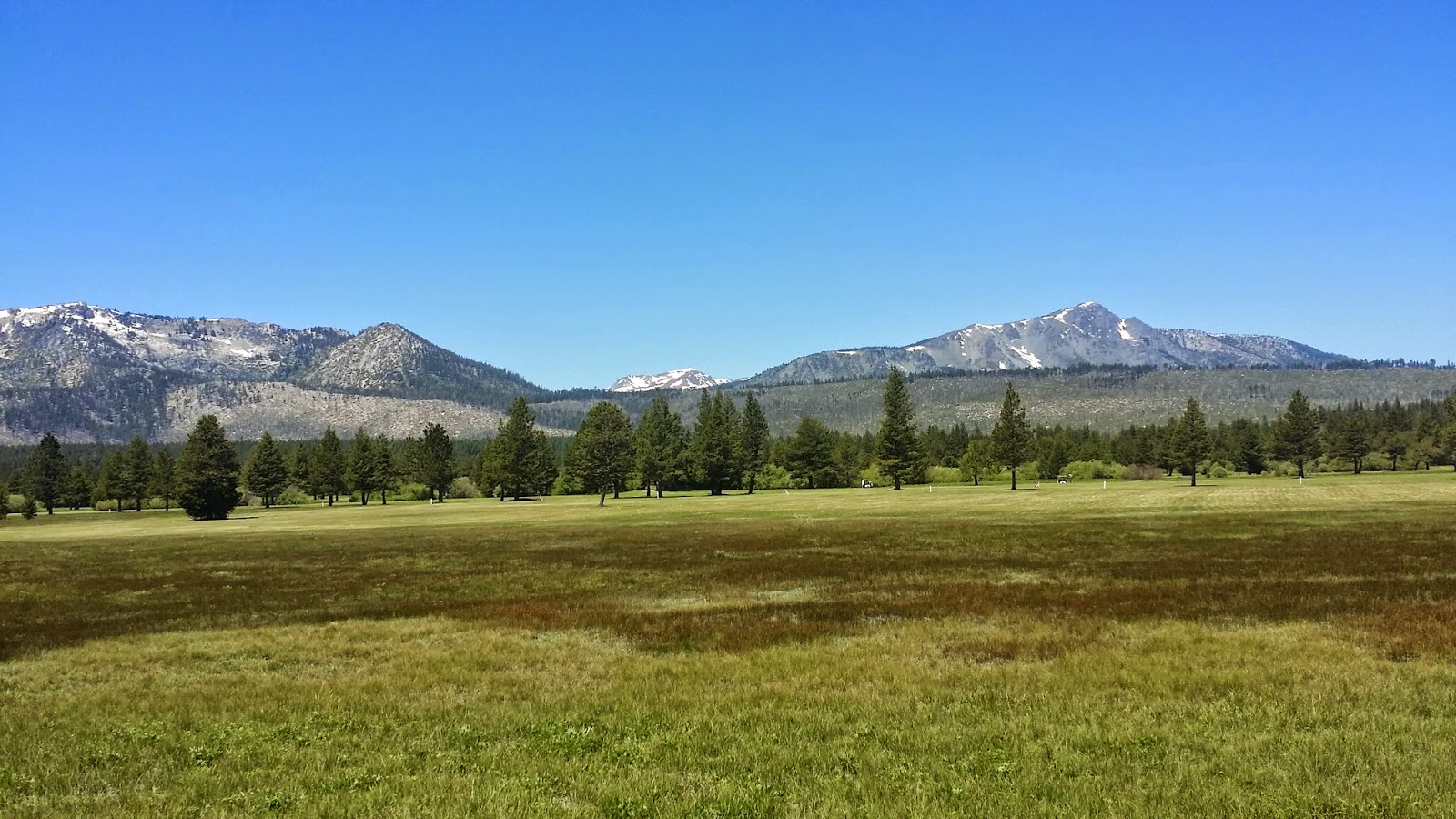 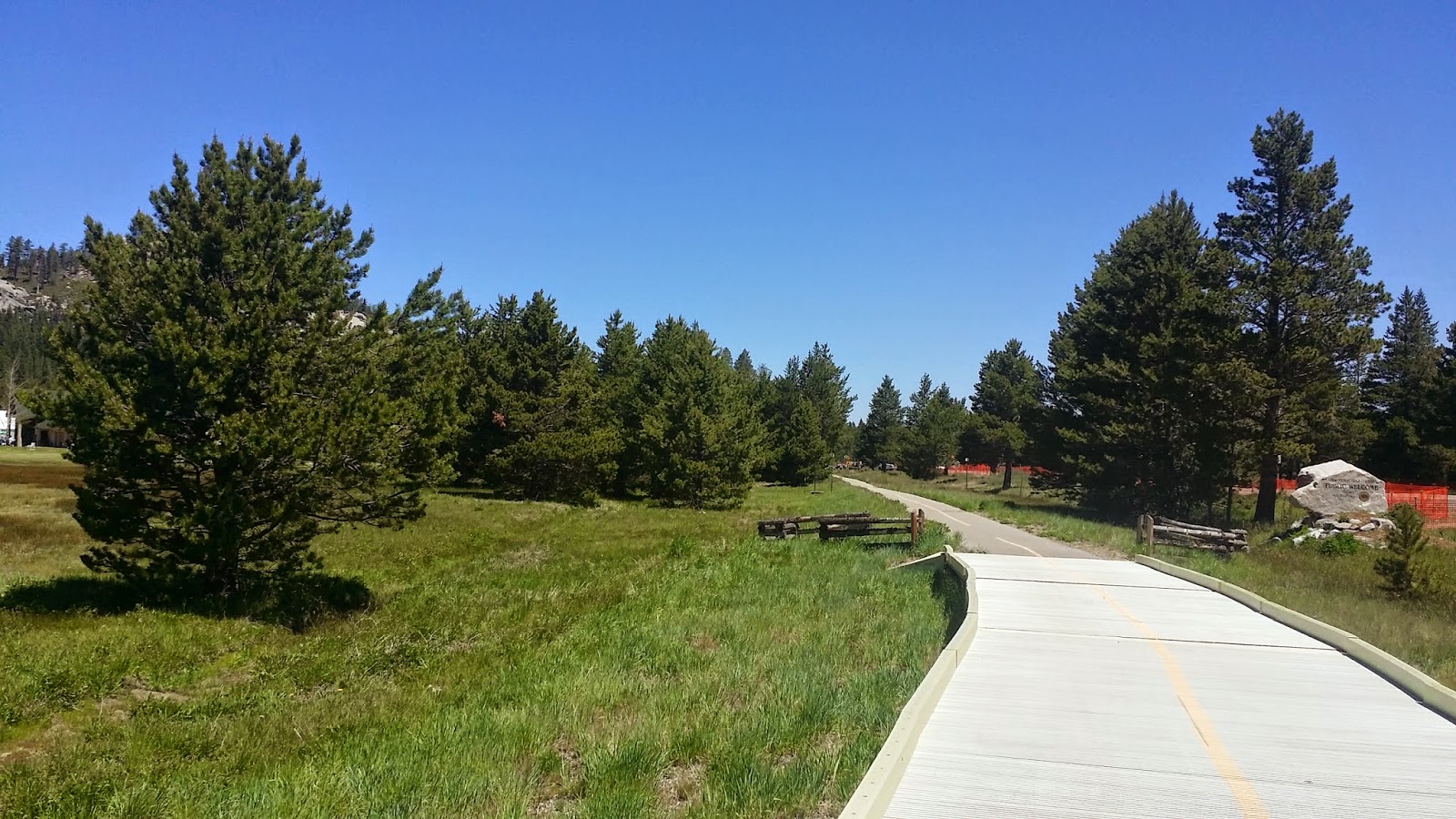 Our "written in Jello" plan was to bike up to this cool restaurant called "Divided Sky" for lunch.......if only we had checked to see when they open for business each day......we arrived just about Noon to find that they don't open for business until 2 pm.  Okay, plan "B"......eat lunch at the little cafe downstairs in the same building called "Meyers Downtown Cafe"......and what do you know? They also have fish tacos on the menu, which was the reason we wanted to eat at "Divided Sky".....2nd Saturday, is Fish Taco Tuesday at "Divided Sky".  Due to my goof we still have not eaten at Divided Sky, but sometimes Miss Serendipity steps in to make it all right.  As it turns out MDC (Meyers Downtown Cafe) also has amazing fish tacos on their menu every day they are open!  Yelp, Urbanspoon, and Trip Adviser all give 4.5 to 5 stars to MDC, and that rating is more than deserved.

We sat just enjoying the al fresco atmosphere and the delightfully balmy air until after 1 before continuing on our ride back toward the "Y"**, and then up Emerald Bay Road ( CA 89) to revisit a couple of thrift stores we hadn't been to for a couple of weeks.  TLE found a nice stainless steel frying pan for use outside when we use our Coleman Stove.....price....$4.....we may keep it permanently, or re-donate it at the end of the summer....either way I am confident we will get more than $4 worth of use out of it.

We arrived back "home" around 2:30 with just the frying pan, which will spend its life with us outside, so no more "stuff" added to the interior of our small abode.  We spent the afternoon reading outside listening to 60's music (my choice), and then around 5:30 decided to cook our dinner outside.  I grilled bleu cheese burgers and corn on the BBQ, whilst TLE used the Coleman to cook spinach, and make caramelized onions and bacon chips to top the burger patties.  I also started a fire in the outdoor fireplace to accompany our dinner, and then continued to enjoy its warmth after a great dinner as we sat and watched the evening shadows descend upon TVC once again.

We retreated inside around 8:30 as the last ember of our fire died, and read the rest of the evening until close to 11 pm......another day lived well in SLT.