TLE needed to do pick up a few items at Raley's so she headed out relatively early Monday morning walking to the store with a small shoulder bag.  She figured to combine her walking with shopping, and managed to log another 4 miles before returning "home".  On her way by the campground office she stopped in to see if there was any mail for us.

Monday is the first time we have been able to receive our forwarded mail in over a month.....as it turns out we had two large envelopes of mail to sort through.  One item I had almost forgotten about was the small padded envelope which held the LED license plate lights I had ordered for the new rear bumper on the Newell.

You will recall that due to the location of the pre-cut holes for the license plate lights being lower than on the original bumper I could not re-install them because a steel bar which forms a part of our receiver hitch was smack dab in the middle of the hole.  There was no way I was going to even consider modifying that steel support, so I had to come up with a new idea. 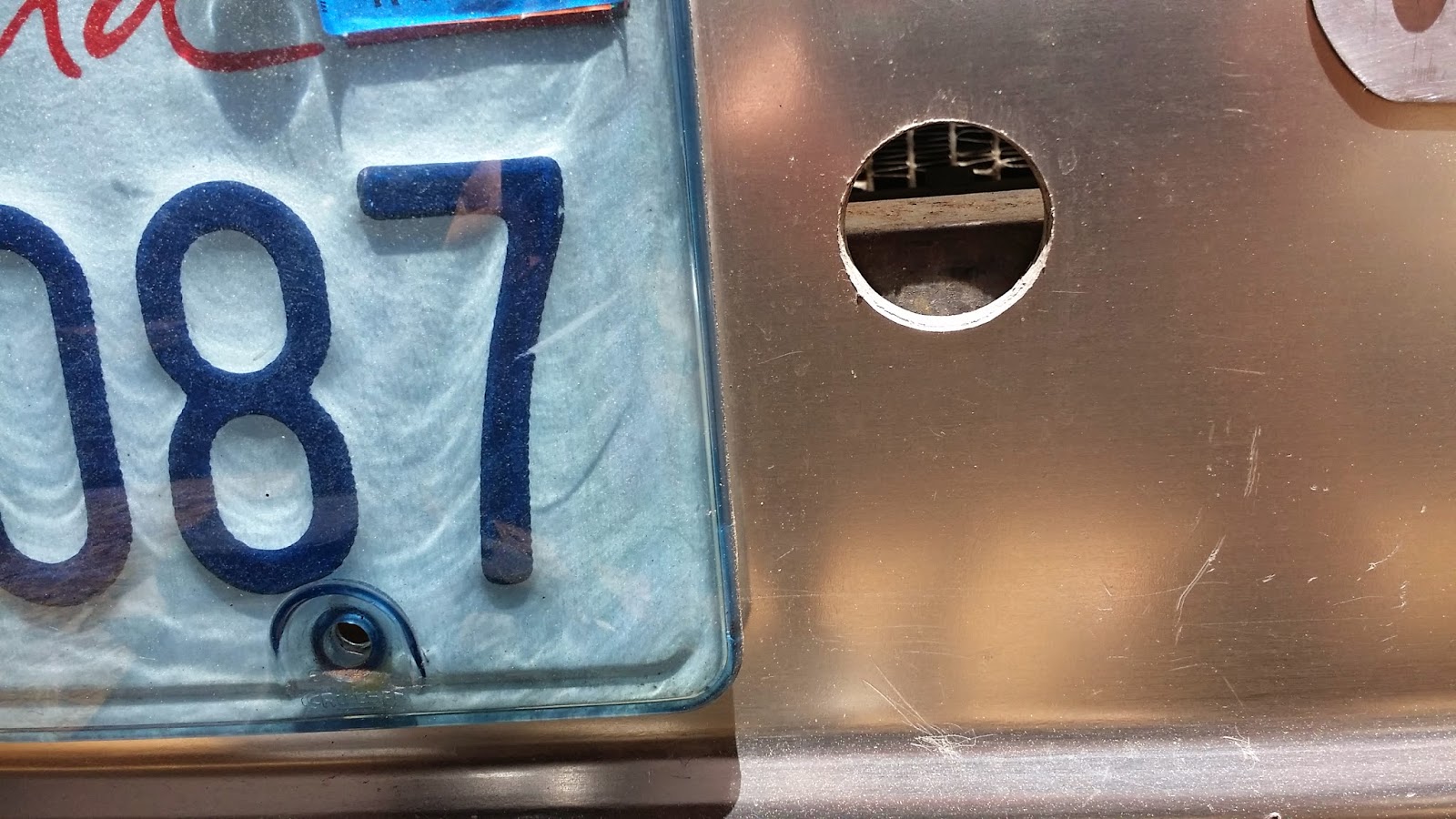 After a few days of searching online for something that would fit the space, I came upon these LED license plate lights from a seller on eBay.....they were $6.99 delivered.

I thought if I fabricated two aluminum disks  to cover the old holes I could mount the new lights by drilling a hole in the middle of the disk, so now that I had the lights I set about fabricating the aluminum disks.  First I drilled a hole in the center of each using my suction cup vise to hold them while I drilled. 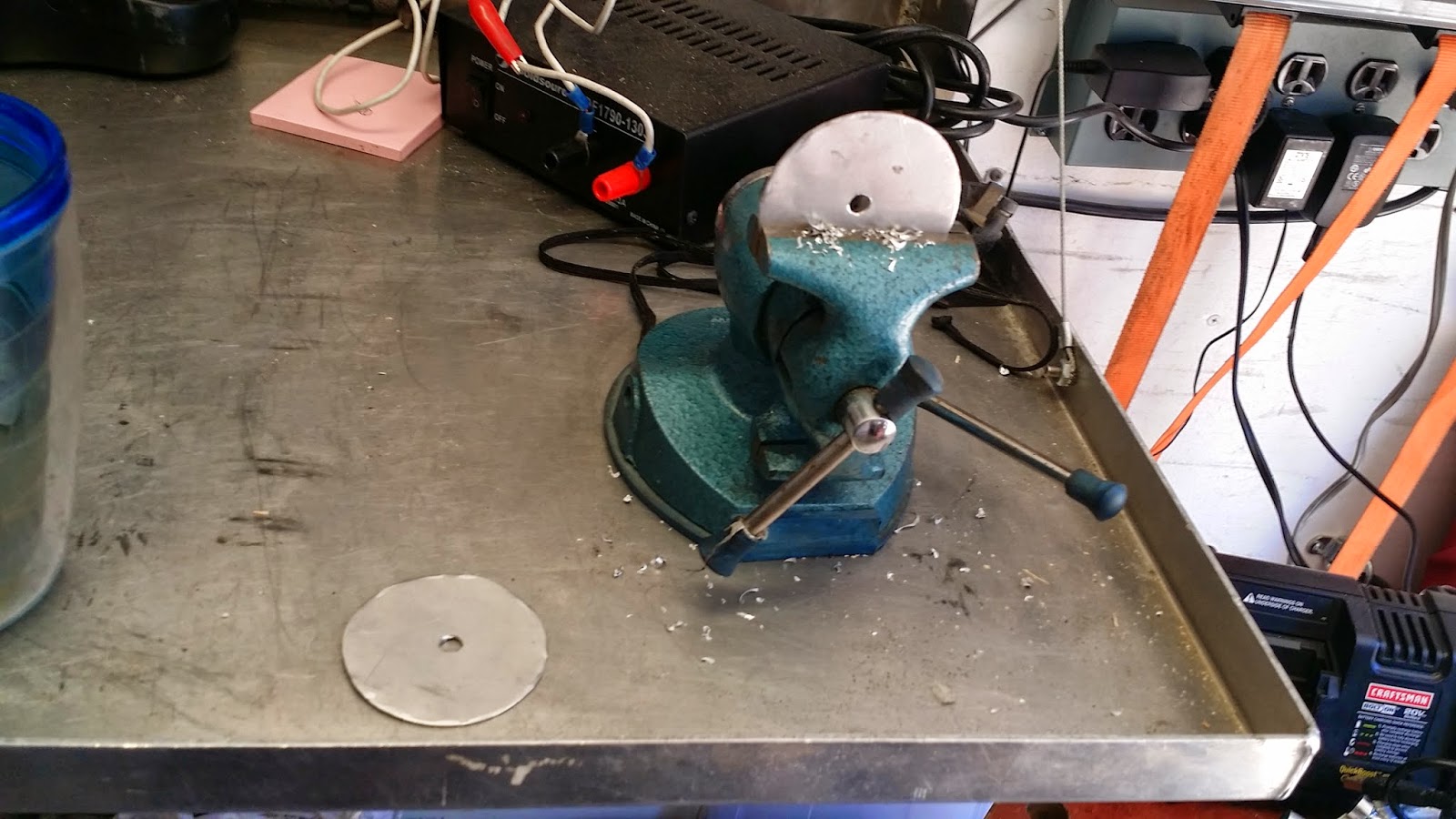 Then I installed the new LED lights, one in each disk.......I also drilled two additional holes in each disk to fasten them to the bumper with stainless steel screws...... 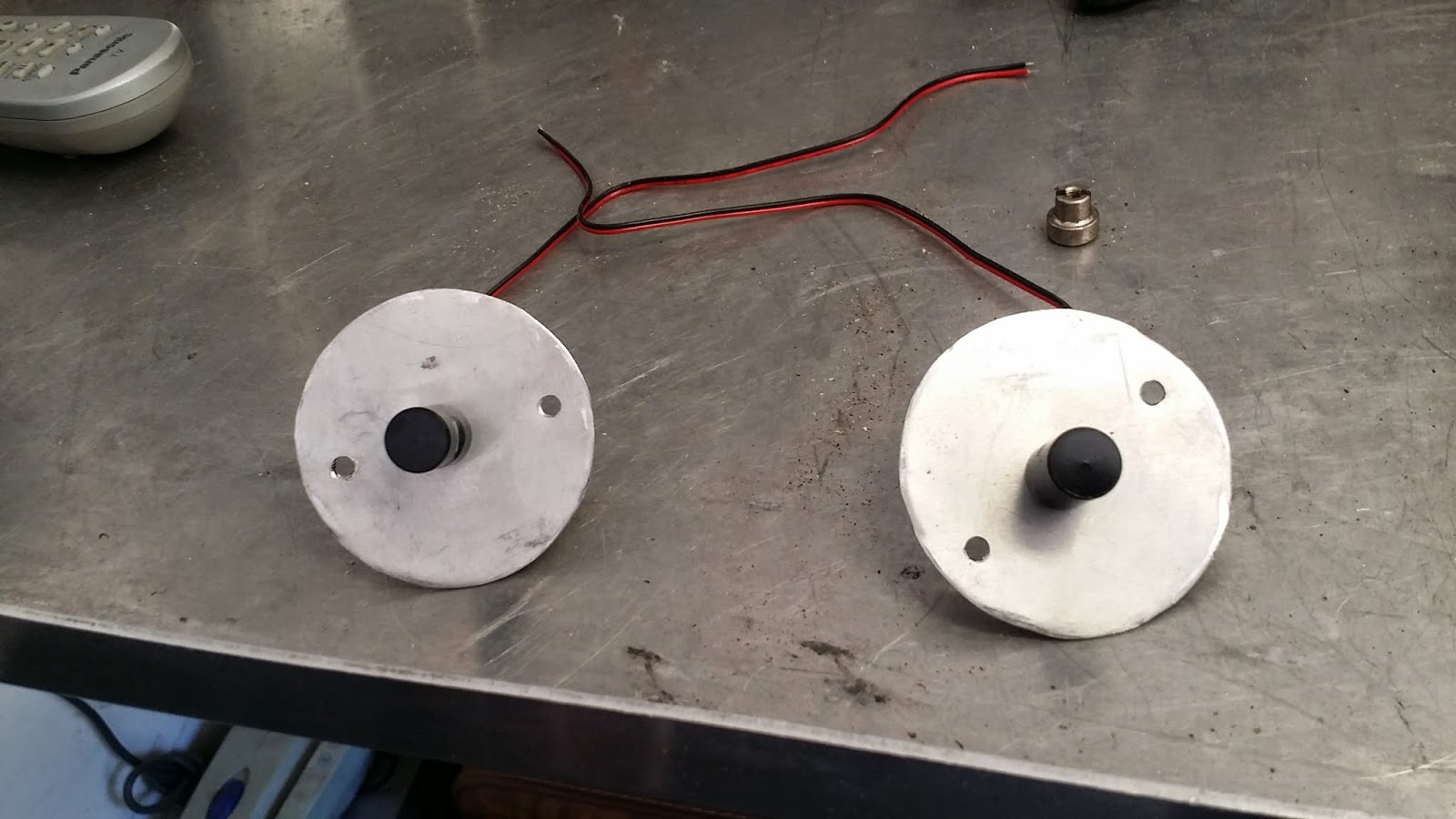 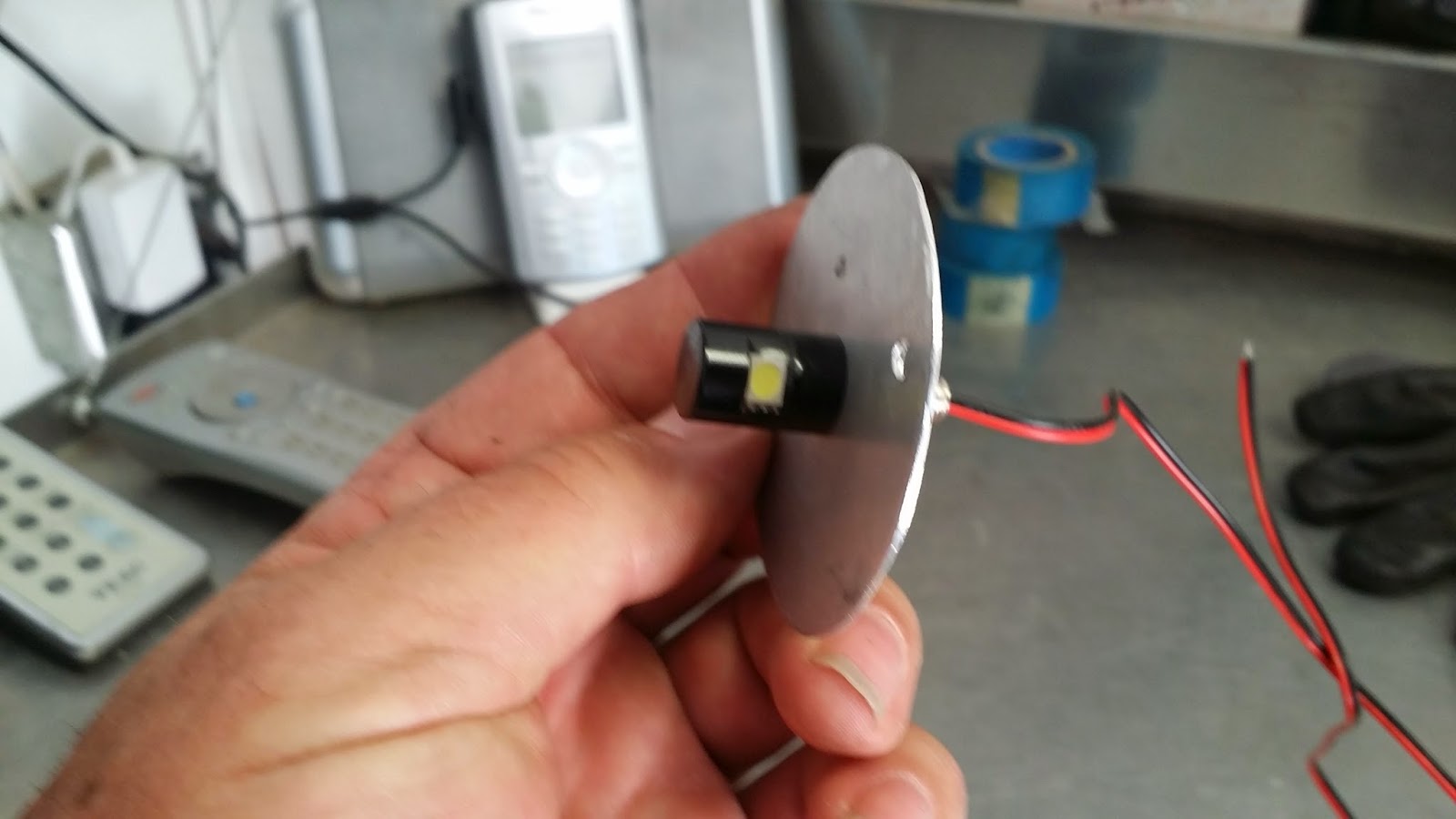 So far, so good......now it was time to install the new lights..............I think it came out pretty good.  I have mentioned before that I am always trying to keep the exterior of the coach as original as possible, but sometimes that just doesn't work out. 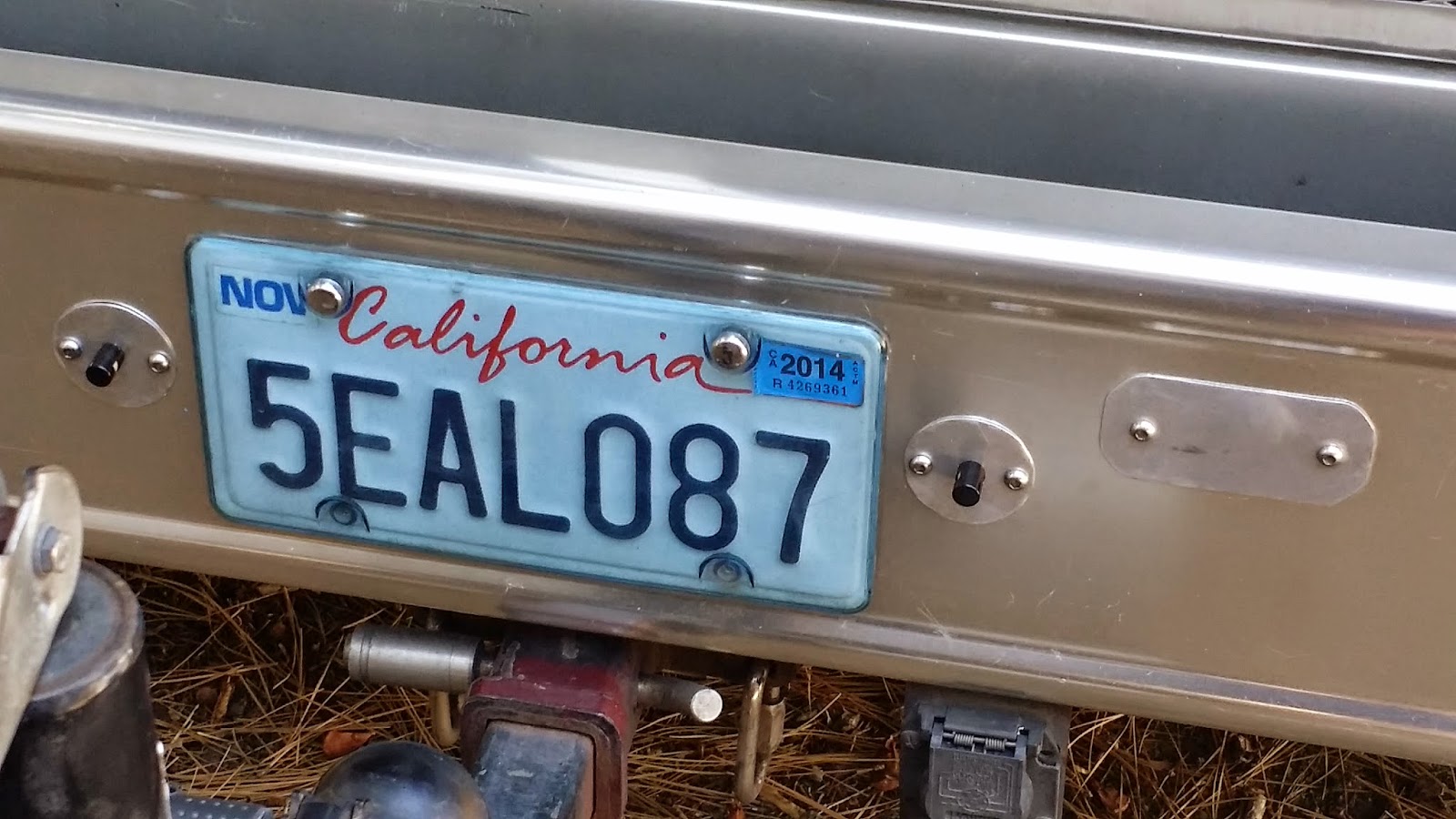 By the time I finished the installation of the new LED lights it was after 2 pm, and time to clean up......I always forget how dirty the rear area of the coach gets when we have travelled a few thousand miles, and a lot of that accumulated dirt transferred to my person during the installation of the new lights!  While I was installing the LED's TLE was busy vacuuming out the coach with my Shopvac.

We both sat outside enjoying the balmy afternoon air reading, and for me a short nap.....at least I think it was short, and before we knew it 5 pm had arrived and it was time to turn on the NHL hockey game between our L.A. Kings and the N.Y. Rangers.  For the first time in two weeks this game was decided in regulation time with the Kings winning 3-0......the game was over by 7:30!  One more win and the Kings will be the Stanley Cup champions!

We finished out the evening watching "Masterchef", "24", and "Longmire"......the weather continues to be "warm" with Monday's high hitting 85......we'll see a small cooling trend over the next 9 days with temps dropping back into the mid 70's.

Thanks for stopping by!
Posted by Whatsnewell at 9:51 AM