Saturday was my first opening, so I was up by 5:30 am sipping some java and typing my daily missive as I have done faithfully since every day since October 4, 2012 when we first arrived at the Amazon Fulfillment Center in Campbellsville, KY.  I was off walking the 1/2 mile to the General Store by 7:15 am and was it cold!  Thankfully there were no clouds so the sun was on my back, and the brisk walk warmed me just enough to keep frostbite at bay.  I arrived at work by 7:25, punched the clock, pulled my cash drawer and then went about completing the opening duties I had been assigned by Ian, my floor supervisor, which include recording the temperatures of all the freezers and coolers, turning on the lights, dry mopping the floor, cleaning the glass on the front doors, and vacuuming the four doormats at the entrance.  By the time all that was done it was time to flip the OPEN/CLOSED sign to 'OPEN', and then retreated to my register to prepare for the first customers of the day it was 8 am.

Mornings tend to be slow until about 9:30 am, but I found plenty to do to keep me busy.....from 9:30  on the business was steady, and the time seemed to move quickly.  Pretty soon it was coming up on Noon time, which meant TLE would be walking through the door any minute to trade places with moi.  I was beginning to think about an afternoon filled with NCAA College Football, and just maybe dong a little repair work on my erstwhile air system.

As I wrote here I discovered that I had a serious air leak in the rear air valve sixpack......these six valves control the 'ride height' when we are under way, and also control the raising and lowering of the rear of the coach when we are stationary and need level the coach.  I discovered that the regulator/filter fixture was leaking out 10 psi of air every 60 seconds when the engine was not running.  Apparently the air compressor was able to overcome the air leak when we were underway, but within minutes of turning off the engine I would lose all air pressure, which would mean I would have to wait a few minutes every time I started the Newell for the air pressure to build up again before I could roll.

Anyway, I had found a new regulator/filter module on eBay a few weeks ago, and it finally caught up with me here at the GC*.  It was a used unit, but was warranted to be in operating condition.  I've never taken this thing apart before and really did not know how to dismantle it so I decided to practice on the 'new' one.  This was when I discovered the internal plastic guts of the 'new' regulator/filter were broken....... 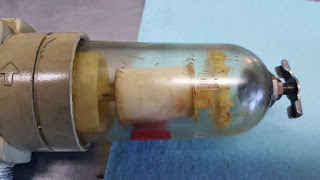 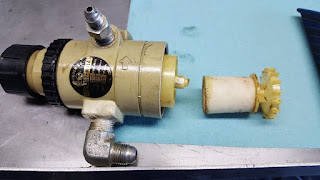 ........as you will note in the picture below, there is a metal cage over the glass bowl that must be removed.....I had planned to reuse the metal cage on the 'new' used regulator/filter module, and already knew how to remove it.  When I removed the glass bowl from thew 'new' used module the plastic piece in the above photo fell out.....that shouldn't happen.  It should be attached to the plastic piece on the left....there was no way to successfully glue it back......doh!  Well, I decided to remove the cage from the existing regulator/filter to see if I could use some of the parts from the 'new' used one to fix the existing one.....this is when I found out what the problem causing the existing one to leak. First of all the bowl was not screwed on tight to seal against the internal rubber gasket, and then I discovered that the petcock valve had given up the ghost and was also leaking air.  Okay, this is easy, and, contrary to my usual experience, it was quite easy.  I removed the bowl from the existing regulator/filter, and then removed the old petcock valve, then I removed the petcock valve from the 'new' used module.  Before reinstalling the petcock valve I cleaned up the bowl so I could actually see inside when needed to see if there was any water which needed to be drained.  Once the replacement petcock valve was installed I reassembled the entire module snugging up the bowl in the process.  I then started the engine to air up the coach.....it took about 10 minutes to build pressure, but then I finally reached 120 psi I shut off the 6v92 and walked back to the engine bay to see if I had solved the air leak problem.....I fully expected to hear that disconcerting hissing sound as air quickly escaped from my system, but guess what?  All I heard was the sound of silence.  The pressure gauge on the module held steady at 120 psi......is that possible?  That is not the Hockwald way! 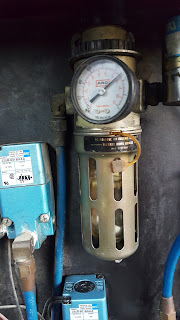 As I sit here composing I am still stunned that the fix was that easy....the air pressure overnight is still holding strong at 120 psi.  We have been living with this air leak getting steadily worse for at least a year, and now in the space of a couple of hours it is fixed, and now I know a lot more about my air system than I did a day ago.

Once I had cleaned up, and put everything away I got dressed to do my daily workout, and by 4:30 I was done.  TLE had asked me to grill a steak we had bought a few days ago, so I lit the Sea-B-Que, got out a cigar and some Tillamore Dew Irish Whiskey on rocks and celebrated my successful fix of our leaking air system...... 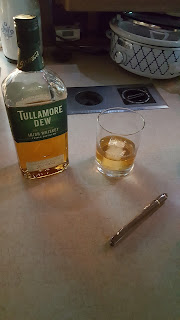 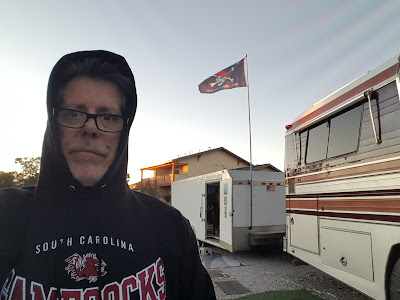 It was cold last night! 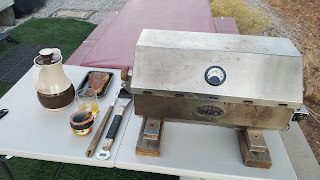 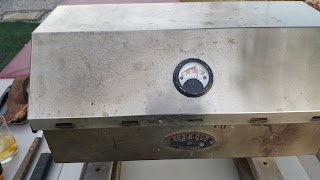 TLE was home by 5:40 and I was sharing my success with her.  We spent the evening watching the annual USC vs. UCLA game played this year in the L.A. Coliseum which was won by USC 28-23.....it was a good day!


When you shop Amazon, please use our link (below) to access their website.......we will appreciate every purchase you make using our Amazon Affiliate link, and  remember, using our link will not add one penny to your purchase, plus we will receive a small commission.
Posted by Whatsnewell at 5:55 AM