Life without electricity in the People's Republic of California....the new norm.......

We were without electricity all day Wednesday, and throughout the entire night, but here at RORVR nothing stops us.....we just 'keep on keeping on'.  Since we had no power there was nothing I could do at the pool other than check the chlorine and PH levels.  Since the pumps were not running I just relocked the gate when I left.

Wednesday was the perfect day to work on two projects I have been thinking about for a week, or two....... 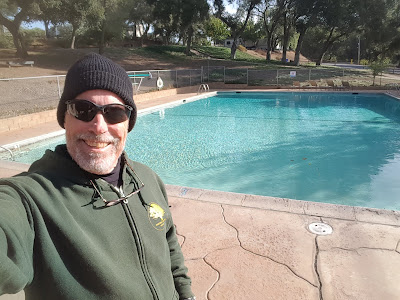 All bundled up against the cold

......but before I headed to work on those jobs I retrieved my 20 fence posts from the delivery site and transported them up to the storage area.  Combined with the one post I had left I now have 21 posts with which to finish my fence project, but they will have to wait until next week.... 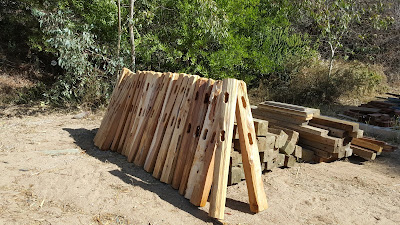 I now have the materials to finish the fence project! 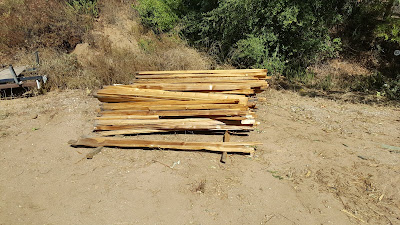 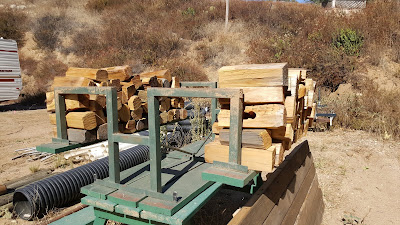 All of the pieces I cut off the original fence posts to shorten them.....they'll make a nice fire when we go to the desert for New Years Eve!

......once that task was complete I headed first to the trail I had reopened near site #32 to work on leveling the feet for the bench, and then create a level landing area in front of the bench........ 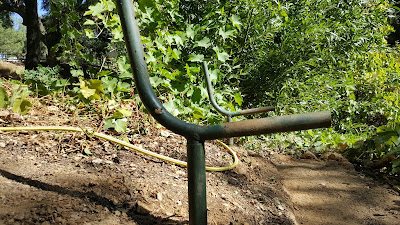 ......it was actually easier to level them than I thought it would be.  I had imagined having to retrieve the Kubota loader to pull the concrete encrusted feet out of ground, but I was able to pull them out with very little effort, and then begin the leveling process..... 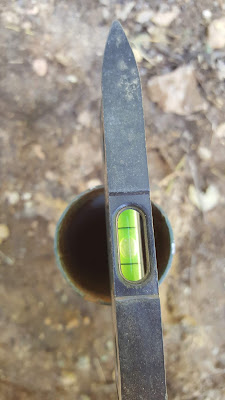 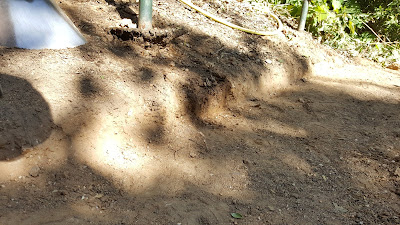 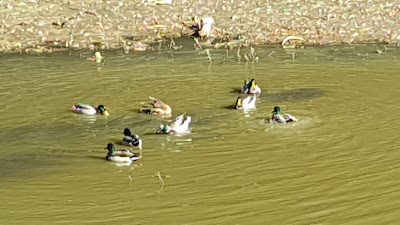 ......by the time I finished leveling the area in front of the bench it was time for lunch.  After lunch I headed back to the pond trail to extend the trail about 4 feet, and then create a pad on which to put a bench....... 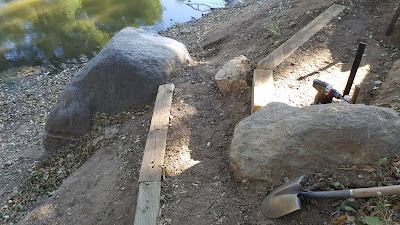 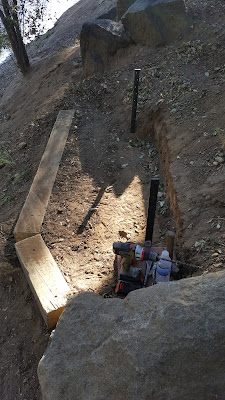 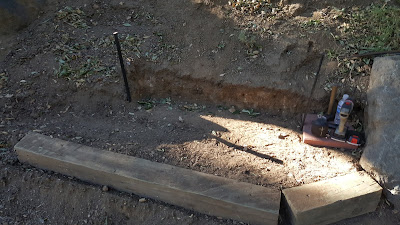 The new pad is ready for the bench....it will sit between those two metal stakes

......it took me the rest of the shift to finish the pad, and install the 6" x 6" beams that will act as a retaining wall.  Frankly, it all came out better than I had envisioned.  As I did with the 6"x 6" beams on the trail, I drilled holes through them, and then drove long sections of rebar through them into the ground to hold them firmly in place.

I finished the bench pad just before 4 pm, so I quickly put away my tools and retrieved TLE from the dark office (no electricity), where she had been all day.  Fortunately our phones have a battery backup, which kept them operational all day long.

We were looking forward to watching game #7 of the World Series in which over the first 6 games no game had been won by the home team.  The Nationals were trailing the Astros 2-0 entering the 7th inning.  Zach Grenke (Astros pitcher) had only yielded one hit through 6 innings, but he gave up a home run to the lead off batter, and then walked the next batter on 4 pitches prompting his manager to pull him in in favor of a relief pitcher.....the relief pitcher promptly gave up a two run homerun to the very next batter, and suddenly the Astros were losing 3-2.  I am still stunned that the Astros manager gave up so quickly on Zach Grenke.  They never recovered, and ended up losing 6-2.  So, for the first time in over 100 years the home team never won a game in the World Series.....the visiting team won all 7 games.....that will never, ever happen again.  How tragic that the home team fans never got to see their team win a World Series game this year.  At any rate, it was a great series, and an unforgettable game #7.


When you shop Amazon, please use our link (below) to access their website.......we will appreciate every purchase you make using our Amazon Affiliate link, and  remember, using our link will not add one penny to your purchase, plus we will receive a small commission which over the course of a year adds up to enough to by a tank of diesel for which we thank you very much!
Posted by Whatsnewell at 7:59 AM