From the Hawkeye State to the Cornhusker State 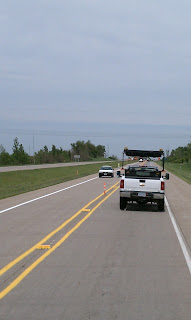 I-80 across Iowa...NO K Rails in the construction zone!

We enjoyed our stay in the Iowa City, Iowa Super Walmart.  That evening Elaine and I walked over to a Texas Roadhouse Restaurant to get a couple of draft beers and an appetizer.  We had a late lunch and didn't feel like a full dinner so this fit the bill.  They had one of my favorite draft beers, Fat Tire Ale, and we ordered a platter of potato skins.....a perfect end to a nice travel day!

Our destination for the next day was Greenwood, NE, just east of Lincoln.  The forecast for Saturday was in the mid 90's, so we decided, in advance, to get a reservation at the Pine Cove RV Park where we could plug in and us our A/C with abandon.  To avoid driving during the heat of the day we left Iowa City at 7am under overcast skies.  The weather forecast indicated the overcast would burn off by 9am, but, thankfully, it lasted until almost Noon.  The Interstate in Iowa had a lot of construction going on, but amazingly when we were merged on to the opposite side of the Interstate there were no K Rails separating us from the on coming traffic.....actually, I like this a lot....we're only going 55mph.....no faster than on many rural two way roads.  Much less stressful for sure!

We passed through Council Bluffs, Iowa around Noon, and subsequently crossed the Missouri River into Omaha, Nebraska.....which meant the RV park was about 30 more miles.  We love the Nebraska portion of this Interstate after only 30 miles!

After exiting I-80 at exit 420 we got to the RV park by 1pm, and checked in shortly after that....were we ever glad...it was around 90 at the time, and the A/C was very welcome!  After getting set up for the evening, and doing a little office work we unloaded the T-Bird and drove into Lincoln to a local brew pub called Granite City Brewery to sample some of their craft beer.  By this time, 4pm, it was up to 96 degrees and it was time for a couple of cold ones.  We sampled a couple of stout beers and settled on one called Broad Ax Stout, and ordered a couple of pints, and some Asian Crispy Shrimp, which was, by the way, excellent! 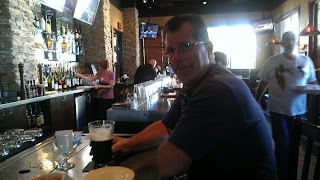 We got "home" around 6:30pm, and settled in for the night....I watched a couple of NBA playoff games, and Elaine read.  We hit the sack around 10:30pm, and quickly drifted off to dreamland......until 4:30am when we were awakened by the coach rocking back and forth!  What?  An earthquake?  No.....high winds, which led to heavy rain, and then the kicker....lightning and thunder that far surpassed that which we experienced in Joliet, IL.....seriously, we were checking for tornado alerts.  Fortunately in about 30 minutes the wind abated, and it was just heavy rain and a light show....finally about 5:3opm we went back to bed, and slept until almost 8am, but the lightning, thunder and rain continued for a couple of hours.  That's the first time in over 3 months on the road that I was scared by the weather!


The picture below was sundown on Saturday and gave no hint, or warning of what was to come a few hours later. 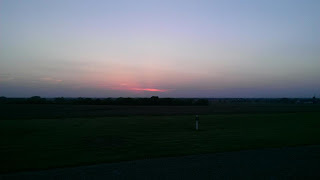 That was Saturday, and a little into Sunday....thanks for stopping by!
Posted by Whatsnewell at 9:09 PM