The weather continues to be dry, and cool, and Saturday was no exception.  After sharing breakfast with my brother and his family I went out to the trailer and tuned up the disc brakes on Elaine's Cannondale road bike.  It appears that the front rotor is a little warped, so I had to back off the brake pads a little so the rotor would not rub the pads while she was riding. Time to get a new front rotor.  Later Elaine and I got the recumbent tadpole trikes out and went for a 11.5 mile ride around the neighborhood.


Mean while my brother and his wife were awaiting news on whether Arthur made the top 14 in freestyle clogging.   Shortly after we returned from our ride they got the good news that he had  made it, so after a great early dinner we headed back up to north Salt Lake City to the competition venue to see if he would medal.  I don't know much about clogging, unless it comes to "unclogging" toilets, but I had seen Arthur dance the night before and compared to the others I thought he measured up quite well.  As it turns out he was good, and won 4 medals over all for his performances.  I think we finally headed home around 11pm, and enjoyed a nightcap with my brother and sister-in-law before heading off to slumberland for the night.


Sunday was, of course Mothers' Day, and my brothers kids prepared a great waffle breakfast complete with Mimosas.  We sat out of the deck and enjoyed the delightful weather.  We decided, over breakfast, that we would drive up to Kennecott Utah Copper Mine on the west side of the valley.  This is the largest open pit mine in the world, and is the only man made structure that can be seen from outerspace.  It is 2.75 miles across and 3/4 of a mile deep.


The large "haulage" trucks that haul the ore to the crushers are enormous.   The trucks hold about 320 tons of material at a time!  The Michelin tires (see Elaine standing next to one of them doing her best Vanna White imitation) cost $25,000 each, and there are 6 on each of these trucks.  They are replaced every year, or after 50,000 miles, which ever comes first....amazing that these trucks travel 50,000 miles per year within the confines of the open pit mine. 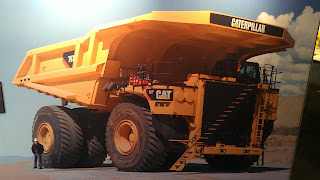 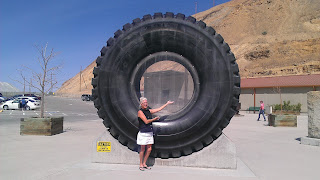 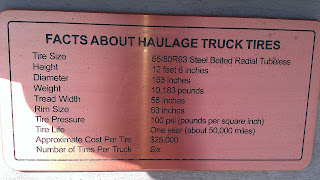 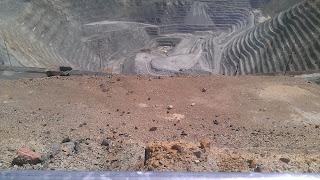 A view from the visitor's center of the open pit mine

After watching an 18 minute movie about the mining operation, and then being lucky enough to be present when they blasted a section to begin loading into the trucks, we headed into downtown Salt Lake City to Squatter's Pub and Grill to drink some great craft beer, and eat some equally great food.  We got a pitcher of Captain Bastard's Oatmeal Stout, and another pitcher of Polygamist Porter.  Both beers were great, and the pub food was all for which we had hoped.  We laughed a lot as my brother and I reminisced about our childhood growing up in Pasadena.

Later that evening after we returned home, and after a nap, we watched an old Mel Brooks film (DVD) called "The 12 Chairs".....set in post revolution Russia (USSR).  Many have never heard of this movie, but it is one of my favorite Mel Brooks films.