Based on weather reports predicting rain on Thursday in Spokane (60% chance) we have moved up our plans to move over to Spokane to Wednesday.  That meant that we needed to get in our "long" ride on Tuesday.  When we want to cover a lot of ground in a short period of time we get out the Cannondale tandem.  We can average over 15mph on the tandem in contrast to our average on the road bikes of around 8-9mph.

The forecast for Tuesday was a high of 64.....it may have gotten that high, but it sure didn't feel like it.  As you can see from my picture of the Lovely Elaine, we were bundled up the entire day.

Taking a short break at the Washington border

We got underway around 10:15am, and pointed the tandem south to the Prarie Trail, which would lead us to the Centennial Trail.  Today we would head west on the CT to the Idaho/Washington border.  As soon as we turned on to the west bound Centennial Trail path we were met with a chilly headwind, although moderate in force.  The Centennial Trail in this area runs high above the Spokane River.  In fact, you only really see the river for one brief 100 yard stretch, and then at the Washington Border.  Nevertheless, the ride was very pleasant.  We pretty much rode the entire 17 mile distance to the border non-stop, other than when we were on the street section and had to wait for red lights.  Of the 17 miles to the border approximately 4 miles was on surface streets, however, 90% of those sections are routed through quiet, low traffic neighborhoods.

We arrived at the Spokane River Rest Stop (about 1.5 miles over the border into Washington State) around 12:15pm.  The rest stop used to be staffed, and there was information available on the entire trail relating to conditions, closures, etc., but due to lack of money it sits empty, so a nice facility sits with doors locked, and no information available whatsoever. 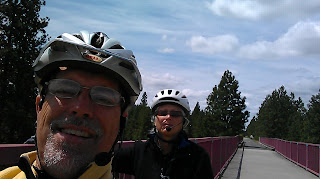 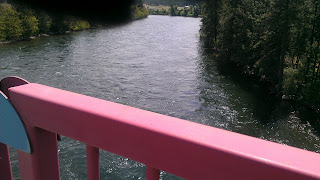 After a short break we turned back to the east and began turning the cranks again.....the nice thing about the turn around was that now we had a tailwind!  By the time we turned around I was getting a little hungry so Elaine and I dug into the supply of energy bars she had brought.  We also stopped to take breaks several times on the way back....there were a number of 9 and 10% grades to climb on the way back, and while the climbs were not long in duration, we were 20+ miles into the ride, and were not at 100% energy levels anymore.  We stopped off at a local Fred Meyers grocery store (looked more like a small Walmart to me) and did a little resupply of some of the basic food stuffs before we move over to Spokane.

We arrived back at "home" around 2:30pm, had a late lunch......Elaine makes the world's best sandwiches!  Around 3:30 we both lay down to take a nap......ended up being a 2 hour nap!  I got up just in time to watch the Spurs/Thunder game.  Another great game with the Spurs winning their 20th game in a row, and 10th in a row in the playoffs, without a defeat.

Wednesday morning we will begin packing up our "stuff" again, but we won't put the T'bird back in the trailer for this short 40 mile drive over to Spokane, and that will make packing the trailer about 90% easier.....lol!

We'll leave here around Noon, or a little before, stopping at the Flying J a few miles down the Interstate in Post Falls to dump our tanks one last time before we settle in at my sister's home until after July 4th.  The day is very cloudy, and cool portending the rain to come tomorrow, no doubt.

That was our Tuesday, thanks for stopping by!

Posted by Whatsnewell at 8:11 AM