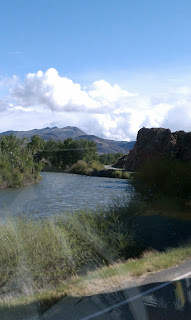 We spent two days in Challis, ID and really only spent time outside the first afternoon we were there when we walked to the local supermarket and stocked up on consumables.  The weather was windy, and cold with occasional rain showers the 42 hours we spent there, but as I have remarked previously, we are living not on vacation, so we take what we get and adapt.  There is no urgent need to "see" everything....sometimes just experiencing a place is enough.  We know that we will go back to Challis in our travels when the weather is more conducive to outdoor activities.

Knowing the overnight temps (Wednesday night) would be down near freezing I left the water bay heater on to prevent freezing, and turned on the block heater when we went to bed so we could easily start the DD in the morning.  At 9am it rumbled to life once again as she always does!

Our driving goal for the day was Missoula, MT....about 199 miles northbound on US93.  The drive north was very scenic....much of the morning we drove along the banks of the Salmon River, which was right up to the banks in many places.  We took a break in the lovely town of Salmon, and then continued our delightful drive north.  Our elevation as we left Salmon was 4,000' give or take a few inches.  We began an ascent that would top out at 7,200' and a snow storm.....yes, that's right, snow on May 24th (see picture below).

The grade on the north side of the summit (which was the Idaho/Montana) border was around 7-8% for the first 10 miles, so I moved the shift lever down to 2nd gear and let the Jake Brake escort us down the grade.  As we descended the snow abated and the skies cleared somewhat.  We got down to 5,000' in Darby and took a lunch break.

I had no idea when the day started that we would go over a 7,000' pass, but that's what's so cool about living......you take what comes and adapt.

We arrived in Missoula, MT around 2:30pm and headed for the Western Montana Fairgrounds where we would spend the night.  The "Days End" book suggested calling ahead to see if there were any activities going on that would prohibit us from staying there overnight, but I've found (thank you Nick Russell) that arriving and a apologizing usually works to our benefit.  When we arrived the security guy asked if we called ahead, and I said "No....were we supposed to?".....he said, well there is a rodeo this weekend....then he hesitated and asked...."do you just want to stay overnight?", and I said "Yes"....."do you need hookups?"....."No" I answered......"OK, then you can park right where you are as long as you're gone by 8am......"Cool" I said.....so for $12 we were allowed to park overnight in a quiet area.

We unloaded the T'bird and drove into town to have an early dinner at the Iron Horse Brew Pub on Higgins in downtown Missoula.  What a great Brew Pub....good appetizers and great locally brewed draft beer.....we chose al fresco dining, and enjoyed the cool afternoon air and the sun peaking through the clouds occasionally.  I had a pint of Big Sky Summer Honey Ale, and Elaine had a pint of Kettlehouse Cold Smoke Scotch Ale....it definitely had a smokey taste....yum!  Both Big Sky and Kettlehouse are local micro breweries.

After a delightful couple of hours we walked across the street to Worden's Market and Deli and bought some half and half, then headed back to the fairgrounds.  This little market has an amazing selection of craft beer and wine!  I watched a little of the Heat/Pacer NBA playoff game, and then at 9pm, by popular request (Elaine), we switched to watch "So You Think You Can Dance".  We hit the sack around 11pm, and slept like we were dead....I'm glad Elaine put the extra comforter on the bed....it got down into the mid 50's in the coach last night......down to near freezing outside.  It was quiet and dark....great ingredients for sound sleep!

View this morning of local mountains

Another great day in the books!  Today we will move westward about 169 miles to Coeur d'Alene, ID where we will spend the Memorial Day weekend, and part of next week with old college friends.  Now, off to the Flying J to dump our black tank......what fun!

Thanks for stopping by!
Posted by Whatsnewell at 8:17 AM