The lightning, thunder and rain ended somewhere around 6:30am, we finally woke up around 8am and walked outside to survey any damage that might have resulted from the 60-70mph winds the night before, and, thank God, there was none!  I did not mention in my prior post that I had opened up all the window awnings on the driver's side of the coach when the sun was  out the day before.  They were catching a lot of wind, so I had to go outside and put them up.  The decision to go outside was easy....opening the door was another.....the wind was pushing it in so I had to lean into it to open it.....just as it opened about 12 inches the wind caught the door and pulled me out of the coach.....I just went with it and let it pull me, and landed on two feet.  Elaine helped me close it, and I went around to the drivers side and put the window awning in whilst being pelted with large rain drops and buffeted to and fro by the gusting winds.  Getting back in was another deal....Elaine pushed, while I pulled, being careful not to let it go out too quickly, and slipped back in again.

Back to there being no damage....we took the opportunity to wipe down the T-Bird, which we had not put away the night before, and then put it back in the trailer, which was also dry inside.  We discussed staying put for another day as the wind was still blowing around 20mph, but I noticed it was coming out of the east, which would mean we would have a tail wind all day, and who can turn down a good tail wind.  We set a goal of getting to North Platte, NE on Sunday, but had an interim goal of Lexington in case the wind changed directions.  If any of you have ever driven a high profile vehicle in cross winds you know it is NO fun.

Elaine fixed me fried eggs, sour dough toast, and sausage links for breakfast......I am always impressed with the great food she turns out of that small kitchen!

We were on the way by 10:10am, and hit I-80 and with the wind at our backs floated down the Interstate......when you have the wind at your back there is virtually no wind noise, and it feels like you must be driving an electric car....very, very quiet.  And, that is the way our day went.....before we knew it we were passing Lexington with no intention of quitting early. About 16 miles short of North Platte we decided to stop at a rest stop for an hour as it was only 3:30pm, and we don't like arriving at Walmarts too early in the afternoon.  As it turned out that decision was one of the best of the day....this rest stop at mile marker 186 is the nicest rest stop we have every encountered.  It must have been 15-20 acres in size with most of that being mowed grass, meandering sidewalks, and small picnic areas surrounded by red brick walls on three sides. 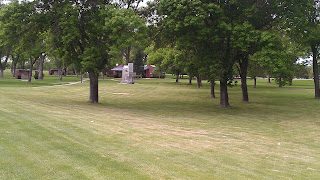 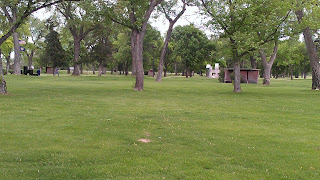 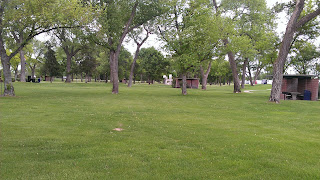 I took time to call my Mother, whom I hadn't talked to in a few weeks, and we had a nice conversation catching up.  She is always chiding me for not posting each day as it happens, so I will make an effort not to wait over a day to make a post.....just for you Mom.

We arrived at the Walmart Supercenter in North Platte around 5pm, and quickly found the truck ghetto, found a level spot and parked.  This is actually a nice truck getto...it is quite spread out, and there were a number of RV's already parked.  We walked into Walmart and got a few necessities (Spanish peanuts, Dewars White Label, anchovies for the pizza Elaine was preparing, half and half....like I said.....NECESSITIES), and then walked back to the coach so I could watch the end of the very close Heat/Nicks game, which the Nicks ultimately won by 1 point.....I still don't get what the Heat play was supposed to look like on that last possession.

Later that evening we watched the Amazing Race finale, and in between the 1st and second hour watched the end of the Laker/Nuggets game which the Lakes won....what a great ending to a close game!  I even had my purple and gold Laker Tshirt on for good luck.

That was our day.....thanks for stopping by!