It has been a wonderful week in South Jordan, UT.  Visiting family for extended period of time on our journey has been one of the highlights so far, and this stop has been no exception.  We've enjoyed visiting with my brother, Dwyer, and his wife, Lori, as well as their two children, Ingrid and Arthur.  I've especially enjoyed spending time with my brother watching NBA playoff basketball.


In addition to family, the bicycling opportunities in this area are over the top.  Bike paths, and wide bike lanes abound.  Some of our readers may not understand the difference between a bike lane, and a bike path.  Essentially, a bike lane is a separate lane on a street designated with painted lines for bicycle traffic only.  You are still riding on the street with other motor vehicles, but there is a feeling of separateness, nevertheless.  Too often, in the southern, and eastern states there as not even a small "shoulder" on which to ride.  We were often in the same lane as motor vehicles, and that tends to lessen the enjoyment of a bike ride.  A bike path is typically, completely separated from street traffic.  A good example is the bike path we have ridden twice in the past few days....The Jordan River Bikeway which follows the Jordan River.  We used to ride the Santa Ana River Trail often when we were still in SoCal for the same reason.  You have no interaction with motor vehicle traffic, and, rarely have to cross a street.  Another example is the Pacific Electric Bike Path that I have written about in the past.  Bike paths can follow existing, but unused, railway rights of way, or rivers/flood channels, or can be cobbled together with parcels of public and private land like the bike path that is being built around Lake Tahoe.   Many states are re-purposing old railroad rights of way into urban, and suburban bike paths.....these are called "Rails to Trails" projects.  You can read more about this organized effort at the Rails-to-Trails Conservancy website.


Well, like other stops along our journey today is the day we get ready to move again.  We'll be leaving South Jordan, UT tomorrow morning and and heading north into Idaho for a week of exploring.  We have not spent much time in Idaho in our journeys.  Usually we are just passing through on I-15.  Our last pass through was in November of 2009 when it snowed on us the day and a half we were there.  We are looking forward to a warmer experience this time around!


Yesterday, Wednesday, we stayed close to "home" doing some deep cleaning inside the coach, and some minor repairs.  When we had the wood flooring installed 4 years ago, the "1/4 round" molding available, that matched the flooring, was a composite "wood".  It did not stand up well to the wear and tear of daily living the past year, so I went over to Lowe's and bought 20' of real wood "1/4 round" molding, and replaced almost that much of the existing molding where the wear and tear was the most obvious.  When my brother came home he got out his nail gun and made it permanent.  I think it looks a lot better.  On our next pass through Utah I'll get at the rest of it. 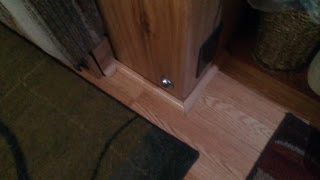 A sample of one section I replaced

In a few minutes I'll start straightening up the trailer so we can get the 'Bird back in tomorrow morning after we hook the coach back up to it, and then I'll start the mammoth job of washing a couple of months of grime off the Newell.  The last time I really thoroughly washed it was in Thibodaux, LA.  I did a partial job in Chelsea, MI while at my sister's home, but it is time for a thorough cleaning.

That's the latest from northern Utah.  Thanks for stopping by!
Posted by Whatsnewell at 6:14 AM