8:26 am - Saturday - 41 F degrees, 56% humidity, wind 3 mph out of the south.....clear, blue, sunny skies once again.  I forgot to mention in my blog post about Thursday that we got our VW back from Higher Ground Autoworx.  We had gotten a few check engine lights last winter whose source was hard to nail down.  John spent parts of two days doing his diagnostic magic and found the culprit....a bad PCV valve/hose.  I rode my bike over to pick up the VW and drive her home.  For the first time in months she started right up with no rough idle.....and no 'check engine' light!

Friday was pretty laid back, but I did spend an hour running 12 volt wiring to the static vent opening in the trailer, which, as I wrote previously, I am going to replace with a variable speed Fantastic Fan.  Now that the power is run all I need to do is remove the old vent and install the new one.

For Friday's work shift I got back to working on the fence once again......I discovered that one of the openings I had closed Thursday had been opened back up by someone living in the RV park across Melba Drive, so this time I tripled my efforts....... 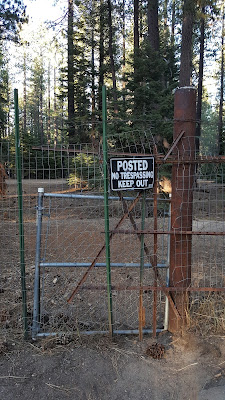 ......what do you think?  Will that withstand a breach attempt?  Basically I wove 5' steel bars into the fencing and then tied everything off with wire, then added an old chain link gate for good measure.  It's possible someone could open that up again, but it would take a couple of hours I'm thinking, if not more.

We went to work at 2 pm (we're open until 10 pm on Friday and Saturday nights still) and I worked steadily on the breach, as well as other holes in the fence until after 6 pm......it starts to get a little dark and cold in the woods by 6 even though the official sunset is not until 7 pm.

The rest of the evening was slow, as one might expect, but I managed to find things to do, and before we knew it 10 pm had arrived and it was time to close up the office/store for Friday......we had a big full harvest moon hanging over the office/store when we got in the cart to drive home...... 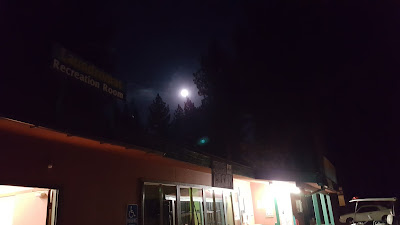