Sunday was the warmest day in over a week....I was looking forward to sitting outside watching NFL Sunday Ticket....my boys, the Denver Broncos, once again were not being televised in their away game at Cincinnati scheduled for 10 am, so I was once again grateful I had purchased the Sunday Ticket.

TLE suggested we walk over to Bert's Cafe for breakfast before beginning our NFL gluttony, so we began hoofing it over around 9:45 am.......yep, I would miss the first quarter of the Broncos/Bengals game for a plate of Bert's Huevos Rancheros!  Being a Sunday we had around a 15 minute wait, but the time passed quickly, and soon we were ordering our favorite dishes.  We were back home just before 11 am, just as the 1st quarter in the Bronco/Bengals game was finishing.....it was 7-3 in favor of the Bengals.  One more time my Broncos came through winning, this time, with their offense, 29-17.  There were a number of good games in the morning, however, most of the afternoon games were  one sided affairs, but I watched, nevertheless, it is, after all, the NFL. 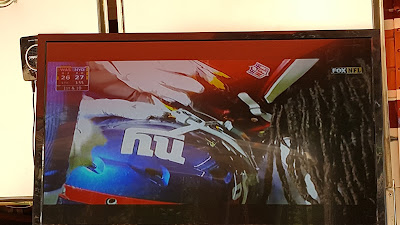 As the afternoon games were coming to an end the temps began to drop, and I thought about heading inside, but I stayed outside glued to the TV as one game (L.A. Rams vs. Tampa Bay Bucs) had a one hour weather delay (lightning)......the game was delayed right at the 2 minute warning withe Rams in a 3rd down, and 11 yards to go for first down.  In the end, the Rams prevailed for their second victory of 2016.  The Sunday night NFL game on NBC featuring the Cowboys at home vs. the Bears, which was won by the Cowboys to end an 8 game home losing streak. 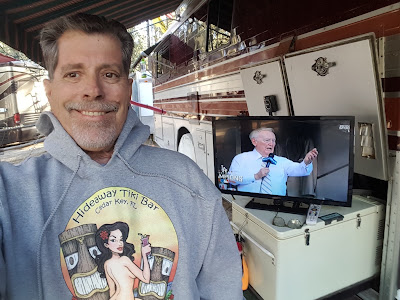 A particular highlight of the afternoon was watching the end of the L.A. Dodgers game vs. the Colorado Rockies, which was the last Dodger home game to be called by Vin Scully.....he began broadcasting Dodger games in 1950, the year after I was born, and I have never watched, or listened to a Dodger game that did not feature Vin Scully calling the play by play all my entire 67 years of life.....no one calls a home run like Vin Scully....

.....as it turned out Vin Scully's final home call of his career was a walk off home run by Charlie Culberson to win the game Sunday, and to clinch the Dodger's fourth consecutive NL Western Division championship.....what a way to go out!

TLE had me grill salmon steaks on the Sea-B-Que whilst she prepared asparagus with hollandaise sauce, as well as sauteed barley with mushrooms......what a great meal to cap off a great day of football gluttony!

As we did Saturday evening, we continued watching Season 5 of 'Longmire' (a Netflix original series)....every time we would say "okay, that's it, time to go to bed", we would feel compelled to watch one more episode.....finally at 1:40 am we decided to call it a 'morning'.

Another sports figure from my youth succumbed to old age Sunday.....Arnold Palmer gone at 87 years old....RIP Arnie.....you were a gentleman, and a true credit to your sport.....you lived life to the fullest.......you will be missed.

Thanks for stopping by!
Posted by Whatsnewell at 10:16 AM