8:48 am - Tuesday - Cloudy, rainy....something different...44 F degrees, 75% humidity, wind - 5 mph from SSW.  It rained for maybe an hour early this morning....maybe a little longer.  That is the first significant rain we have had in over two and one half months.  I don't now if it will be enough to settle the dust....I hope it is.  We are off work now until Thursday at Noon.....nice.

Monday the only evidence a weather front was moving in was the 20 mph wind from the south for most of the morning.  I drove the VW over to Higher Ground Autoworx around 9 am to have some diagnostics done.  Over the past year I have gotten three, or four 'Check Engine' lights with no apparent cause.  He is going to spend time trying to figure out what is causing them.  I rode my bike back home and then spent about an hour beginning to clear out some stuff that will not be leaving TVC with us.  I need to spend a couple more hours, but I made a good start and the trailer is already looking more spacious.  I'm going to spend time Wednesday installing the vent fan I wrote about yesterday and doing some more house cleaning.

Once again we reported for our shift just before Noon, and immediately were into the flow of the day.  My first task was to complete the installation of the new swing seat on the large swingset.  With the help of Miguel to move and set up the large extension ladder we got the final swing seat installed....... 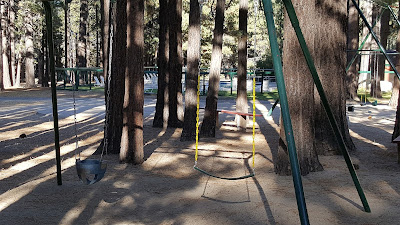 The 'kiddie' swing (new swing is the one on the right) 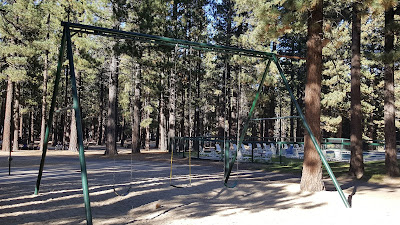 Large swingset.....middle swing is the new one

......now, for the first time in over 3 years, we have all five swings in operation!  I spent the next few hours driving past all the sites to remove expired site tags, pick up trash, and any wood left behind.  Once again I ended up with two loads of wood that were added to my pile....I could have picked up more, but stayed strong.  I spent about an hour using the long handled pool net to skim floating debris off the surface of the water....the 20 mph winds blew a lot of pine needles and other pine tree flotsam and jetsam into the pool (and everywhere else in TVC for that matter).

We were home by 8:20 quickly putting away our outdoor chairs in advance of the forecast rain I wrote about earlier....we were in bed by 10:30 once again.....now for a couple of days off from work!

The 'weather guessers' were at it again.....originally the forecast for Tuesday was 90% chance of thunder showers going on most of the day with a guessed low of 29 F degrees.....we got a little over an hour of rain, and the low only got to 35 F degrees.

Thanks for stopping by!
Posted by Whatsnewell at 9:46 AM