I previously estimated that we would get a little over 70% occupancy, but I was way off!  Sometime Saturday evening we passed 100% occupancy....we sold 10 overflow sites!  It was not our intent to sell overflow tent sites, but our policy is not to turn anyone away, especially at night.  All of the remaing unreserved sites quickly vanished Saturday afternoon as we had one 'walkin' customer after another.  I have to say, I admire folks who can make the decision to drive four, or five hours to Lake Tahoe on a holiday weekend with no reservations.

A few days ago I ordered a 'Trailer Valet' for our trailer based on an ad I saw on Facebook.  After doing some research I decided, with TLE's input, that this is exactly that for which we have been searching for years.  We occasionally find ourselves in situations where we need to turn the trailer around in a tight situation where we have to use someone else's vehicle to do so. 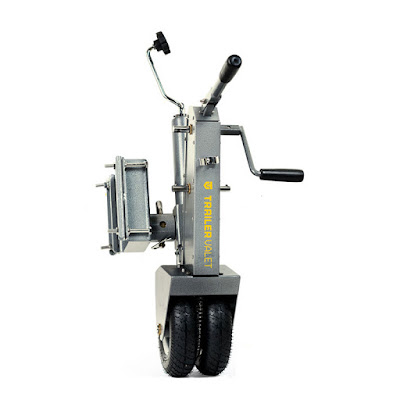 At any rate, it arrived Friday so I got to work Saturday morning installing it on our trailer.  Essentially, by turning the hand crank I can move the trailer, and with the steering handle I can turn it.  It was very easy to install, and I am looking forward to testing it in a few days when I move the trailer forward about 3 feet. 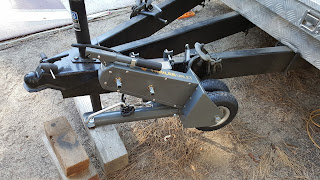 Installed - currently in the 'stow' position 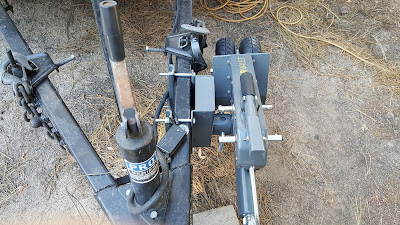 Can be easily rotated to the upright position for use

TLE was on call all day and went in initially at 10 am for a couple of hours, then returned for about an hour before being called back for another hour, then we both reported at 3 pm for our regular shift.

My left heel is healing quickly....I did not use the crutches at all Saturday.  As I said earlier, Saturday was crazy crowded......there were hundreds of kids riding bikes everywhere, and one had to almost have 'eyes in the back of one's head' as they were coming from all directions.  The Ice Cream Parlor was busy non-stop from 11 am to almost 9 pm selling ice cream at $1 per scoop.  We also added a hot dog stand (independent contractor) and he did great business all day, too.

We had over 50 people for our Saturday night movie in spite of the cool temps (in the 50's by movie time at 7:30 pm).  I spent a lot of my time dealing with problems in the park......one site (136) had two RV's plugged into the pedestal, which is against our policy, obviously.  They were gone when I discovered the issue so I left a note that upon their return they had to unhook one of the RV's.  Well, they finally returned about 9 pm......I saw them return and gave them 30 minutes to unhook before stopping by the site.  At 9:30 they had not unhooked either RV so I stopped by to ask them in person.  The guy I talked with was very uncooperative, and gave me a lot of grief, so I explained his options....he had two....either unhook one RV, or start packing up to leave on the spot.  His tune changed, and within a few minutes he had complied.

We had another situation which began Friday afternoon (and was still an issue Saturday) when I stopped a guy in an 'side by side' (a Razor I think) ATV which only had an offroad tag....it was not street legal.  I advised him our rules expressly prohibit the use of unlicensed ATV's.  If they are licensed then they can only be used to enter and exit TVC....no driving around the park, and no using them offroad, period.  He and his passenger, by the way, were wearing full face helmets....not exactly what you would expect for someone who pledges to only drive 5 mph and do no offroading.  He went to talk to our manager and convinced him it was street legal, and so our manager said he could use it only on the pavement, and never to exceed 5 mph.  Well, it turns out they took it out to our overflow area and spun donuts for a couple of hours....fortunately they were observed by my friend Harry.  I brought Harry over to the guys' site and he identified the ATV as being the one he saw (there are no others in TVC right now, so this part was easy).  I confronted the gentleman and he flat out denied it was him.  Nevertheless, I told him not to operate the ATV again in the park, or he and all of his friends (3 sites occupied) would be immediately evicted from the park.  My manager apologized to me for overriding my judgement....he'll let me make the decision in the future.

As quiet hour (10 pm) approached I began trying to quiet down the noisy folks, and there were a lot of them.  It took me over an hour, and repeat visits to at least a dozen sites to get everyone quieted.....I had to threaten three sites with eviction if I had to return a third time.  People under the influence are rarely ever cooperative and several tried to argue with me....it was just one of those nights.....sigh.

As I said earlier.....only two more days until peace is restored and all the craziness abates....our season is almost over and it will be time to begin to get ready for next year.  We're going to try to get a lot of stuff done this fall that we normally put off until spring.

Thanks for stopping by!
Posted by Whatsnewell at 9:26 AM