I began Sunday replacing the small 19" flat screen TV with the former 32" flat screen which used to be our 'outdoor TV'........ 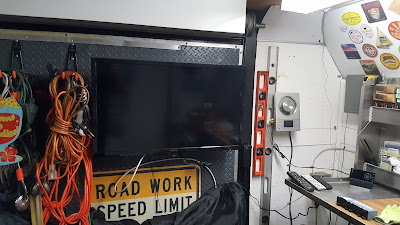 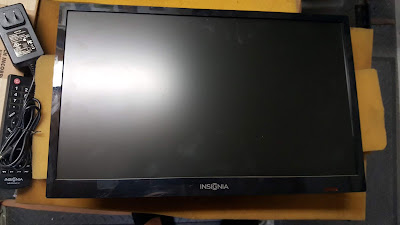 .....on Saturday we purchased a new TV mount for the 32" TV as the one I used for the 19" was not big enough for the bigger TV.  It is a swing arm wall mount so now I can turn the TV so I can see it when I'm working on a bike in the rear of the trailer.  As I wandered back and forth from the coach to the trailer it was nice to see the Super Bowl on a big TV just like the one in the salon.

Other than getting a haircut, and doing some shopping with TLE that was the sum total of my Sunday.  Everything I did revolved around Super Bowl LIV (54) beginning at 3:30 pm.

The Super Bowl itself was just what I ordered up.....a competitive game until 3 minutes to go in the game.  K.C. was up 24-20, and San Francisco just had to drive down the field and score a touchdown to win, but they failed to convert on 4th down and turned the ball over to K.C.  On the second play from scrimmage K.C. ran the ball, and the runner scored an unexpected touchdown to put K.C. up 11 points with just 2 minutes to play.....they were just trying to run out the clock.  I'm happy K.C. won as their last Super Bowl appearance and victory was 1969......50 years ago.  Of course, I always feel badly for the losing team, especially in a hard fought, close game where either team could have won.....K.C. just executed better when the chips were down.

Posted by Whatsnewell at 8:51 AM