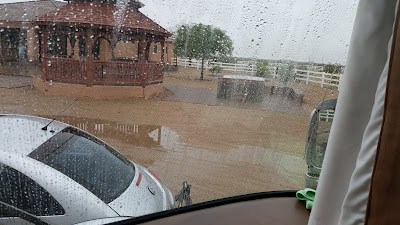 When I last wrote it had rained gently all night into Tuesday morning, but the weather gods were kind to us in that it did not rain all day, but by 5 pm it began to rain again, and continued raining harder all night, as witnessed by the picture I took this morning.....standing water everywhere.  So, what happened in between all that?

After 3 days of 'water heater wars' my body was crying out for a break, so I kind of took the day off with no major projects undertaken.  I did spend major amounts of time in the trailer puttering.....one of my favorite activities.  I have this 'screw organizer' hanging on the wall to the right of my work bench, and over time it has become very unorganized.....unorganized to an extent that it bothered me more and more each time I opened one of the drawers looking for something.  There are 30 small drawers, and 9 big ones..... 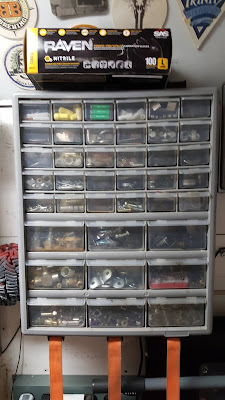 .......obviously, I have more than just screws in those drawers, and over time I got lazy, so when I would attempt to put an item with its mates I found there was not always enough room so I took the easy path and just tried to find a drawer with enough space thinking I would deal with it later.  This is not a good practice for one who has spent most of his, or her life seeking order and symmetry.  Well, that just led to chaos, which ultimately leads to a 'tipping point', and that 'tipping point' was Tuesday.  I was sure I had 4, or 5 of a particular fastener, but I could only find 2 of them.  I kept opening drawers in search of the other 3, and did find them, but it was like an 'Easter egg hunt'.  Each drawer (small, or large) can be segmented into two chambers, so I began cutting out aluminum strips to divide as many as possible into two, and thereby get all like items together in one of the two chambers.... 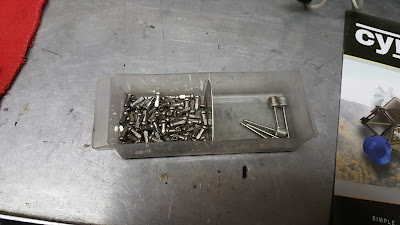 One of the small drawers 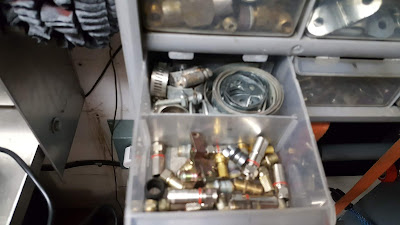 Two of the large drawers 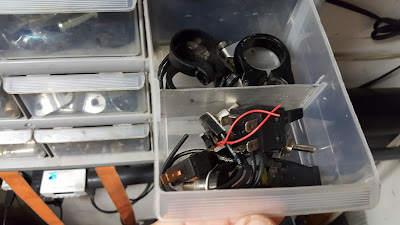 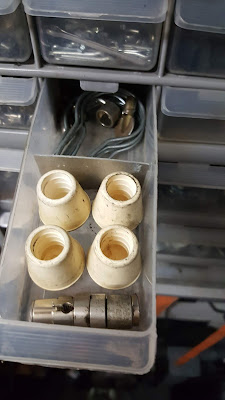 I know rubber ends aren't the same as rare earth magnets, but if I put them in any other place every single metal object in the drawer sticks to them

I spent time putting away all the tools I had been using the prior three days during water heater wars, some time on the roof caulking a few screw holes I had missed when I replaced the whole house fan a couple of years ago, as well as re-caulking some of the Winegard cabling for the new automatic dish to the roof so they won't be blown around when under way.  Another small repair I accomplished was to fix the door pull handle on the inside of the passenger side door of the VW Beetle, which had broken when we were in the Anza Borrego Desert.  It's a temporary fix until I get the new handle I have ordered.

In between the many small tasks I took a couple of naps, and at the end of the day I put the new Girard Tankless water heater to the ultimate test.....a very long, hot shower....by long I mean about 25 minutes.  With the old water heater I would begin to see a reduction in hot water around the 20 minute mark....not bad right?  Well, with the Girard the hot water was still going strong after 25 minutes.  I could have stayed in longer, but my fingers were beginning to wrinkle.  The point is, it does provide endless hot water.  The only limiting factors, if you are plugged into full hookups, are wrinkled skin, and/or the amount of propane you wish to combust.  Personally, I'm happy with a 10-15 minute shower, but it's nice to know I can go way longer now if I so wish.  If you are dry camping you will, of necessity, be limiting how much water you use, which we already do anyway.

When you shop Amazon, please use our link (below) to access their website.......we will appreciate every purchase you make using our Amazon Affiliate link, and  remember, using our link will not add one penny to your purchase, plus we will receive a small commission which over the course of a year adds up to enough to by a tank of diesel for which we thank you very much!
Posted by Whatsnewell at 9:21 AM