9:10 am - Sunday - March 22nd - Wittmann, AZ - 59° F, 55% humidity, wind 5 mph out of the east by northeast......partly cloudy skies today with a forecast high of 71° F.  As of this writing TLE and I continue to be asymptomatic.  It has been a week since we have been in Surprise and exposed to large groups of people, so one more week until we know we are out of the woods, until we have to go into town again, then the countdown begins once again.  The stats for Arizona this morning still how just 63 confirmed cases, with 1 death.

Saturday was the first day of Spring, and the beginning of my Spring offensive against the Thetford dump valves.  My battle plan for rebuilding the Thetford dump valves called for an initial air, land and beach assault around 10:30 am.  Now that I had the new, small ratchet tool I felt it should take a 2-3 hours at most to remove the 18 screws including those two rascally bottom screws located  on the blindside of the valve, replace the gaskets and o-rings, reinstall the 18 screws, and put them back together.  Was I ever wrong.  In the fog of war you lose track of time, and your strategy becomes very fluid as conditions change rapidly.  This time around I began with the most difficult to remove bottom screws, or as I have come to affectionately call them, the 9th screws, first.  Last time I removed the other 8 screws on each valve first, and then had to abort because I could not get the 9th one out.  I began with the 9th, and bottom screw on the left valve in the picture below......↴ 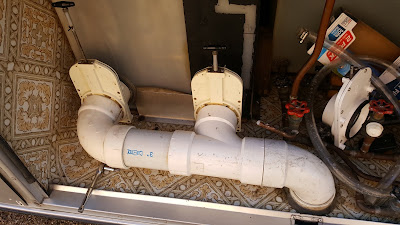 .....this one had been the most difficult to get at the first time, but in the end both 9th screws were extremely difficult to remove, and took about 2 hours to remove each one.....seriously.  The other 16 screws came out with little difficulty.  Finally after 4 hours I was able to swing the outer arm out and see what was going on inside the two valves.  In the picture below the gray water valve is on the left, and the black water on the right......↴ 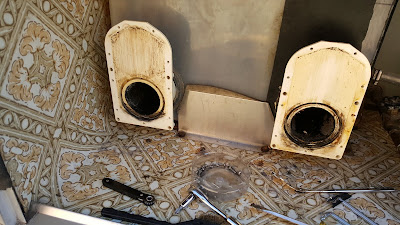 ......in the next picture (below) you see the arm swung out, and the two paddles, which when lowered close off the tank, and when raised allow the effluent to flow out.  The one on the left in this picture is the black water one, and the one on the right is the gray.  Since it (gray) is left open when we are hooked up for long periods of time, and only closed when we are under way it shows much less wear.  The black water valve is opened ever week, or so, and moved up and down anywhere from 6-8 times during the dumping process, so it gets lot of use, and showed much worse wear, but to be expected after 38 years of use....↴ 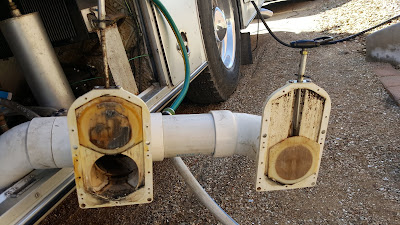 ....I then removed the two rubber o-rings, or gaskets (see below).  The one on the left in the picture below is the gray water one, and the other is the black.  You can see how bad the black water one looks, whereas the gray water one is still amazingly pristine, and could possibly be reused...... 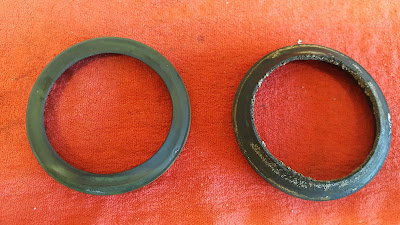 .....since I had a brand new paddle from the new Thetford valve I purchased a few days ago, I decided to use it to replace the black water paddle, and its corresponding stainless steel rod which is used to pull the valve upward when you wish to dump the tank.  I took the gray water paddle into Tom's Newell House and cleaned it in the wash sink, and cleaned 38 years of debris off the stainless steel rod.  While this was going on I had the two new o-rings/gaskets soaking in the Thetford treatment solution to extend their life span, and then put the new and used paddles into the same solution for about 90 minutes.  Once I had cleaned the surfaces of both sides of the valve bodies I installed the new o-rings, reassembled the paddles with their pull rods, then installed the new gasket which seals both sides of the valve when joined back together with the 18 screws.  By the time I finished tightening the 18th screw it was 4:30 pm.......6 hours of non-stop warfare...... 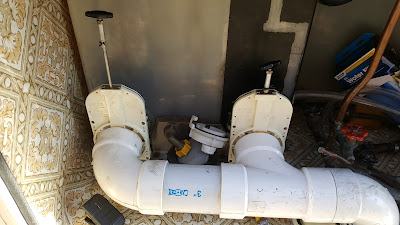 ......it was a brutal, knock down, drag out battle, but I won.   My good friend Tom staged an intervention and helped me get out the 9th screw in the black water valve, plus two other screws I had not yet removed.  That gave me a break of about 40 minutes, or which I am very grateful.  Thank you Tom.....I could not have had victory without your help!

By 5 pm I had put away all the tools, cleaned up my work area, and had turned on the water once again.  TLE spent the day inside playing cards with Darlene, since the water was turned off and she could not use the restroom, or run and water inside the Newell.  TLE did return just as I was fighting the last, and 18th screw to provide moral support, for which I was also very grateful.

So, the two major theaters of war (water heater and dump valves) have been pacified, and peace has been restored.  The state of the Newell union has never been better.....life is good, but the future is uncertain.  Things seem to be getting more constricted by the day as the Chinese Virus continues to wage war upon the world's population.  I continue to call it the Chinese Virus, not because I do not like Chinese people, but to remind myself, and others that it was the suppression of knowledge, and data about how dangerous the virus was by the totalitarian Communist government of China that has caused this pandemic to be so bad.  The proletariat of Communist governments are, by nature, inveterate liars......even in this case when the truth would have made them look like heroes, they lied, and lied, and continue to lie to this day.  The Chinese people, and the rest of the world are the true victims of their lying, despicable, self serving, totalitarian government.


When you shop Amazon, please use our link (below) to access their website.......we will appreciate every purchase you make using our Amazon Affiliate link, and  remember, using our link will not add one penny to your purchase, plus we will receive a small commission which over the course of a year adds up to enough to by a tank of diesel for which we thank you very much!
Posted by Whatsnewell at 10:20 AM