Has it really been six months since the boys from Integrity Mobile Detail put a winter coat of wax on our baby? Seems like we were just embarking on our trip into the frozen tundra, and here it is late May (even though it feels more like February) and time for another coat of wax......Tom and Carmello Montoya will be here on Thursday at 8:30am to wash and wax our Newell, and detail Elaine's Thunderbird.

On Friday we will head back to Rancho Jurupa Regional Park where Elaine and I spent President's Day weekend in February. This time 5 other family members, and their respective RV's will be joining us for 3 days of relaxation at this great local park!

After my last trip to Temecula for the soccer tournament I noticed I was getting an error message on the Prodigy brake controller.....the flashing initials "SH" kept taunting me all the way home. I pulled out the Prodigy owners manual and discovered that "SH" was short for, well, SHORT! I put on the right blinker and had no blinking light. I turned on the lights, and had NO tail lights.....ugghhh! This has been the winter for electrical problems. I took the coach into Joel's Automotive Repair (http://www.allmar-tech.com/joels/Joels_New/new_contact.html) in Upland (he has been my trusted mechanic for about 12 years). They discovered a short in the wiring between the brake controller and the rear of the coach which had blown the rear fuse. So, they rewired the controller, reset the fuse, and all is well once again. I go in today to pay my bill (gladly) and bring the coach home to get detailed on Thursday, and prepare for our long weekend.

This past weekend marked the end of the spring soccer season, and the summer tournament season will start this weekend (I won't be wearing my soccer official hat this weekend!). Before we know it we will be starting the fall season again, and Elaine and I will be less than 12 months from retirement and hitting the road in the Newell....yeah!!!

Picked up the Newell this afternoon. They completely rewired the brake controller using existing conduit to run the new wire so there won't be a "shorting" problem again. I decided to check the turn signals, etc. before leaving and they worked, however, the trailer jack was not putting out any turn signals, so they had to rerun those wires....took about 15 minutes, but now it all works.

Great to have the coach home again....we'll be cleaning up the inside in preparation for our long weekend, and getting the outside washed and waxed in a couple of days.

I'm still in mourning as the Lakers lost for the second time in Phoenix, so now they return to L.A. all tied up at 2 games a piece. Hope Orlando can extend Boston a couple of more games, but now am not sure the Lakers will be their opponent the way we have played the last two games.
Posted by Whatsnewell at 7:58 AM No comments: 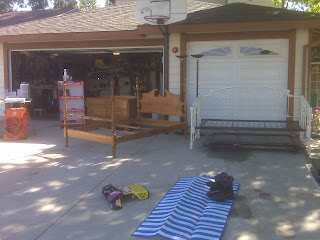 We sold 2 trundle beds, dressers, etc.
Part of our strategy for starting our "fulltime" adventure (now just 16 months away) is to divest ourselves of "stuff". A few weeks ago we spent parts of two days removing stored "stuff" from the attic over our 3 car garage. That exercise was in preparation for a garage sale. Garage sales are really cool.......people pay us for the priviledge of hauling away our "stuff". What a great concept!! The City of Ontario requires that you obtain a "garage sale" permit. You are only allowed to hold two of these per year. Failure to obtain the permit is punishable with a $30 fine. We chose the "two consecutive weekend" option. Over the 2 consecutive Saturdays (April 24th and May 1st) we sold a lot of "stuff" we hadn't used in years, and received around $700 from eager buyers.
Our fair city also provides a free pickup of "LARGE" items once per year, so the couple of remaining large items (old entertainment center, 4 poster bed) will be picked up in the next few days. Our garage attic is now emtpy, and we now have the use of our 3 car garage again for garaging cars! What a novel concept.....haha!! 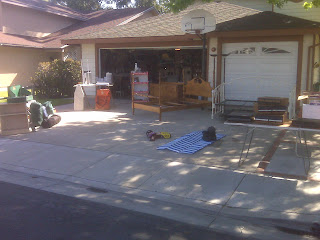 The pieces are slowly falling into place. Our next big task will be getting rid of stuff inside the house as we get closer to our "exit" date. No doubt some of the "stuff" will end up in storage. In the mean time we will be doing a lot of long weekends, and maybe one long trip this year. It really depends on Elaine's schedule. We have two "flying trips" planned over the next 30 days. Elaine is flying up to Oregon next week for a getaway with girl friends from her company, and I am flying to Spokane to visit my sister and her family for a few days. Next month we will fly down to Austin, TX for our niece's graduation and to visit with the Texas contingent of our extended family. Additionally, we wil get out in the Newell over Memorial Day weekend, and the July 4th weekend visiting local county parks (Rancho Jurupa and Yucaipa Regional Park respectively).
Thanks for following along!!!
Posted by Whatsnewell at 7:25 AM No comments: