Today at 3pm we slipped the gravitational pull of our Ontario home and "rocketed" 13 miles east at 60mph to Rancho Jurupa Regional Park.......free at last, thank God, free at last.........we are now fulltimers! This Newell is our home.....what a marvelous feeling!
We are still awaiting our start date as camp hosts, so we are staying here thru Thursday on our Passport America discount, and then heading up to Ventura to sit on the beach staring at the Pacific Ocean for 4 days, and then back here on Monday. I'm hoping by then we will have our start date. So we are in a wonderful park with 50amp service and full hookups for $17.50 per day....1/2 price Monday thru Thursday. If you don't belong to Passport America seriously think about joining. We'll save enough money this week to pay our annual membership fee. It is a great deal and pays for itself quickly.
Posted by Whatsnewell at 6:49 PM 4 comments:

We have gotten the go ahead to do our "Live Scan", which is essentially finger printing, and background check from Riverside County. Once that is complete, and we are found to be free of felonies we will receive our start date for being camp hosts at Rancho Jurupa Regional Park. Our anticipated start date is 2/1/2011, but we will update that shortly.
We are, NEEDLESS TO SAY, very excited about this timely development!
Thanks for reading......
Posted by Whatsnewell at 9:26 AM 5 comments:

Received a call from Ranger Dana at Rancho Jurupa Regional Park last Friday. We had submitted an application a few weeks ago to become camp hosts at the park starting in February, when we move into our Newell fulltime. We were invited for an interview on Monday, January 10th.
When we arrived for our 8:30am appointment Ranger Dana walked us over to the new cabins for a tour. On our last trip there we had spent a few minutes looking through the windows of the new cabins and were impressed with the amenities. We are tentatively going to be responsible for the 6 cabins recently added to the park, helping people check in and out, being sure the units are left in good condition, and cleaned. We are awaiting approval, and the completion of our back ground check.
Essentially, in exchange for the use of a site (including utilities, and rent) we will each donate 10 hours per week. We are very excited about this development as it will further reduce our overhead, and allow us to remain in one place for the next 8 months until retirement! We should get final confirmation within the next 2 weeks!
Thanks for reading!
Posted by Whatsnewell at 7:27 AM No comments:

One of the things I love about owning a motorcoach is the increased spontaneity in our lives. We had planned, as has been our custom for the past decade, to be at home on New Year's Eve. On Wednesday, December 29th, I got a call from a long time friend, Claude, who lives in a retirement community (Sun City) in Indio, CA with his wife Lindy. They have a small two bedroom home there, but the second room is used for his wife's therapeutic massage business. He invited us down for New Year's Eve, and suggested we bring our coach so we could spend the night. It took me about 5 seconds to say "YES!". We're always looking for an excuse to head some where in our coach.
So, Friday morning around 9am I went over to the storage lot to pick up the coach. When I arrived the outside temp was around 40 degrees, and had been in the low 30's most of the night, so I knew I would have to run the block heater for a little while to turn over the Detroit Diesel. As always, the genset started right up, so I switched on the block heater and began readying the coach for departure. Since I had about 40 minutes before I knew it would be warm enough to start I decided to clean the windshield inside and out, as well as the mirrors. I always feel kind of rushed at home when we're trying to hit the road, so this opportunity gave me time to do a thorough job. By the time that task was done and I had removed the tire covers, raised all the blinds, the engine was ready to be turned over and it roared to life immediately!
I got back home around 11am, and while Elaine was finishing up some work on her computer I decided to clean the aluminum wheels and clean a little of the road grime off our trip down to San Juan Capistrano a couple of weeks previous in the rain. 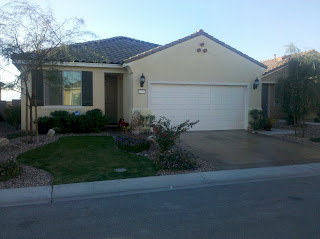 Claude and Lindy's home in Indio, CA
We finally were able to hit the road around 1:30pm for our 90 minute drive down to Indio, arriving at our destination around 3pm. At the security gate we were promptly checked in and given a two night pass to park in front of Claude's home. I don't think the temperature the entire day got above 49 degrees!
Claude ran a power cord out from his garage so we could gobble up 15 amps of power for our coach. I knew the temps would get into the low 30's again that night, and was grateful for the 15 amps. We could at least run our bedroom electric heater, which is much quieter than the gas furnaces. Those electric heaters each use about 11-12 amps, so there is no way to use two of them at the same time. Both mornings I got up before Elaine and turned on all 3 gas furnaces to take the chill off the interior while the coffee was making (I had to turn off the electric heater to run the coffee maker as the two draw about 16 amps). Wow was it cold inside for a few minutes! 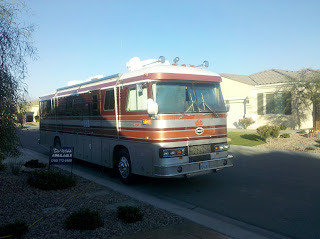 Courtesy Parked!
We spent the early evening on their patio in front of their roaring gas fire ring all bundled up. Eventually Claude fired up his Weber BBQ and cooked some great "baseball" sirloins for dinner. We sat around after dinner until almost midnight talking and laughing, which pretty much sums up the rest of the weekend, other than we watched the entire Rose Parade New Year's morning, which I haven't done in years, in High Definition, and then watched a "few" college bowl games the rest of the day. Of course, I managed to take a few cat naps, and snacked way tooooo much.
Around 10am on Sunday we bid our farewells to our gracious hosts and headed home. As we pulled on to our home street in Ontario we commented to each other that in just a few weeks we would no longer be going home after a trip, but now fulltiming in our beloved Newell home!!!
A Happy New Year to all of our readers! Thank you for reading!
Posted by Whatsnewell at 7:56 AM No comments: