The road that passes by our boondock camp continues on downhill to the Verde River area for a little over 1 mile.  I haven't ridden my mountain bike since January 1st, so this seemed the perfect opportunity to do a little downhill and a little climbing.  Walking around town is one thing, but I need some real exercise, so around 9:30 am I headed down the road on my Intense 5.5......the road is hard pack with a little sand here and there, but the ride to the bottom was uneventful.....just enjoyed the wind in my face and the scenery.  Then it was time to climb back to the top.   The road never seems as steep going down, but it seemed very steep going up....maybe 9-10%.....but it's all good....I needed to up my heart and respiration rates, and that is exactly what I did.  On the way down it seemed my front hydraulic disc brake was not functioning properly, and when I got back to the top I checked it out......well, it was hardly working at all.  I had planned to descend at least one more time into the valley, but decided it would be best to have two functioning brakes on that mile descent.

After working on the brake for 30 minutes I could not get it to work, so decided since we were going into Sedona anyway I would drop it off at a bike shop to get it fixed.  After a quick shower TLE and I mounted the Yakima bike carrier on the VW, then the bike and began our drive into Sedona. 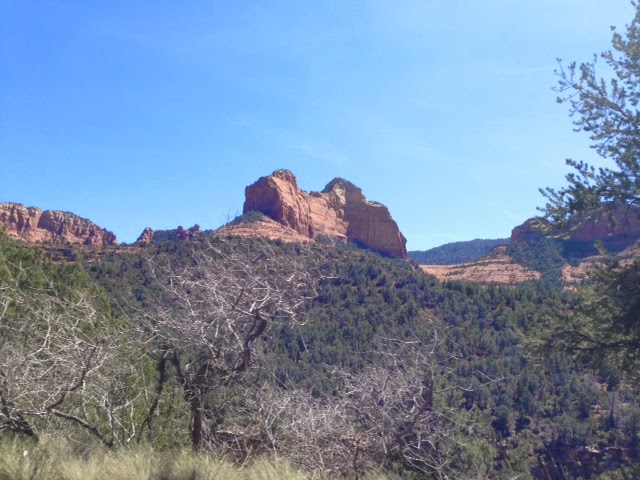 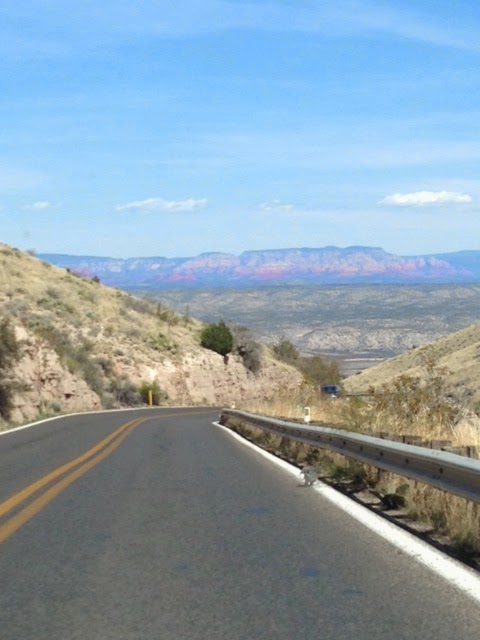 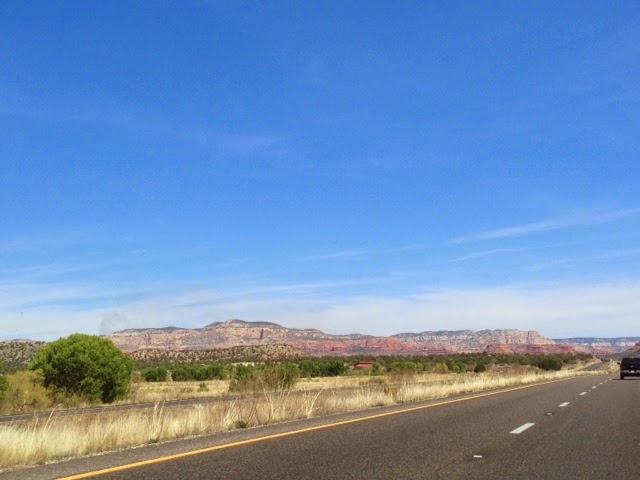 TLE snapped a few pictures as we approached Sedona from the south.  I fear these pictures do not do justice to what we saw, and how captivating it was.  In between picture taking TLE looked up a bike shop called "Over the Edge Sedona", and within minutes I was rolling my bike through the door.  The bike mechanic said he could have the bike done between 3 and 4, and it was closing in on 11:30 by that time, so we had plenty of time to explore. 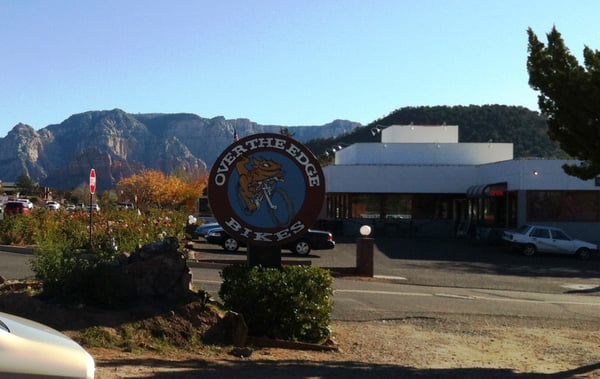 Our next stop was the Visitors Information Center where we met Taylor who supplied a whole lot of serendipity for us.  Our boondock site is just a few miles from a place called "Out of Africa" which is, essentially, a zip line park built around a wild animal attraction.  We have always wanted to ride a zip line, but they are always sooo expensive.  They did have one package that included one ride on a 1,000 foot long zip line for $39/person, so we had decided to go Sunday and do that.  Here is where the serendipity kicks in.....Taylor (a 20 something young lady) offered us the entire package.....3 hours of zip lining......for $25 per person......wait, what?  The full "Predator" zip line tour retail price per person is $90.  In addition to that she offered us two days and two nights for $25 at a place called Sedona Pines, a kind of timeshare place, where they have mostly 1 and 2 bedroom apartments you can buy in to, but also a dozen, or so RV spots.  We had no interest in owning a timeshare again, but for $25 for two nights (regular rate is $75/night) we figured we could sit through a timeshare presentation.  All told for $75 we got $330 in value for 90 minutes of our time.  Just a side note, if you are on a fixed income, and have limited disposable income, always check into the local visitor's center.....we have gotten these kinds of deals numerous times over the years.

Our appointment at Sedona Pines was for 2 pm, and it was 12:15, so we decided to drive to the top of the "switchbacks" on 89A about 16 miles north of Sedona.....many of our friends who have been here before told us we had to drive up there.  Of course the views along the way were spectactular. We arrived at the top of the switchbacks around 12:45 and decided to eat a sack lunch TLE had made while enjoying the view....again I just don't think our pictures do what we saw justice.

After finishing our lunch we began our walk back to our car.......my phone began ringing....I hardly ever get phone calls.....I didn't recognize the area code, but answered anyway.  As it turns out the call was from from Greg Ryder of Cape Blanco Lighthouse fame.....we had applied for a volunteer position there a month, or so ago for September, or October.  At the time Greg had all the positions filled, but put us on the waiting list.....as it turns out someone had just cancelled and he was calling to tell us we are in!  Additionally, he offered us a two month gig! Our friends Chris and Cherie will also be there for the same two month period, so the serendipity just keeps on rolling in!  2 minutes later I got a call from the bike shop advising my front brake was toast, and they could not fix it either.....well, I guess that makes me feel a little better about my bike wrenching skills.  Fortunately I had a spare front brake in the trailer, so I just had him bleed the back brake and replace the pads, which were quite worn as it turns out.

About 12:45 we began our descent back to Sedona and our 2 pm timeshare presentation appointment making it to Sedona Pines just a few minute before our appointment.....traffic in downtown Sedona at 1:30 in the afternoon is a real grind!   We enjoyed the timeshare presentation provided by our host, Josie, but we have been through many of these over the years, and remained strong.....no money was transferred this day!  This is a very nice resort just 2 miles outside of Sedona proper, and the pricing is pretty reasonable if a timeshare is what you want. We said our goodbyes, picked up our gift vouchers and headed back to our boondock "home", but not before driving back into Sedona to pick up my mountain bike.  We'll be back to Sedona Pines Sunday afternoon for our two day stint, and more exploring of the Sedona area.

Saturday did not turn out anything like we expected, but we just went with the flow and reaped the benefits.  We arrived back "home" just after 3:30.  I watched a March Madness game between Arizona and Wisconsin......Wisconsin won an overtime game by 2 points....it was a great contest with neither team holding a big lead the entire game.....my kind of game!

Posted by Whatsnewell at 9:12 AM