Vacation from our vacation... 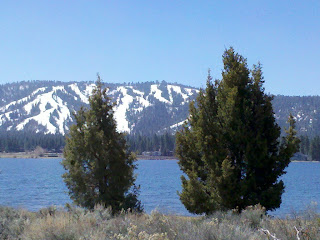 Big Bear Lake with Snow Summit in the background

My brother called me a few weeks ago asking if we could join them at Serrano Campground on the north shore of Big Bear Lake, CA for a long weekend starting April 14th. Of course, we never turn down an opportunity to change the view out our front door, so I said "YES!".

We live at around 800' elevation in Rancho Jurupa. Serrano Campground is at 7,000' elevation. We would gain over 6,000' in elevation in less than 40 miles on State Route 18. I had been noticing the past 6 months that even on moderate climbs on cool days that my Detroit Diesel 6V92 was running hotter than it should. Normally on the flats the operating temp is around 180-182. On climbs it might get up to 195, but lately it was getting over 200, and once up to 220. I had been applying Simple Green degreaser to the radiator, but apparently I was not getting all the gunk off. Knowing that I would have to climb around 6,200' in less than 40 miles had me concerned, so this past Tuesday I applied a heated solution of Simple Green and water to both sides of the radiator several times washing it off each time with hot water. I saw a lot of particulate matter fall to the ground. I repeated the process again Wednesday and got even more off. On Thursday the temperature never got past 188! Big, big improvement.

We left home around 10am, and arrived at Serrano around Noon time. 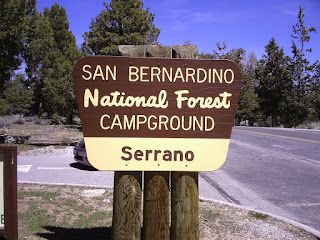 Serrano Campground is a National Forest campground, but is administered by California Land Management. There are 4, or 5 loops. Only one loop, Snowberry, has full hookups. The rest of the loops are strictly dry camping. 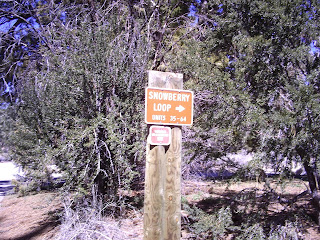 There is a bike path that runs from Serrano into Big Bear City. We rode this path a couple of times. 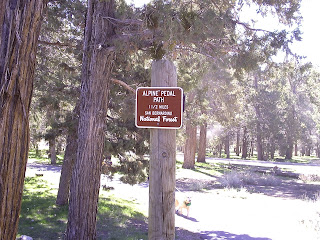 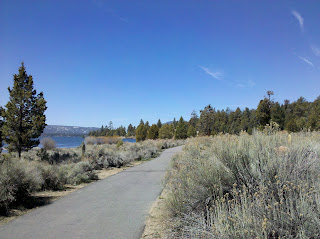 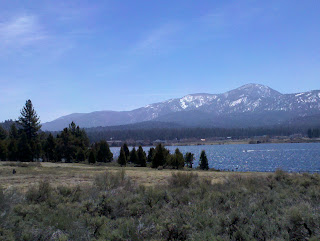 The bike path ran along the lake providing great views. 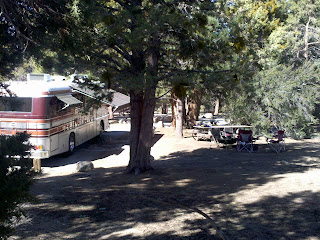 We were assigned site 42, and my brother, Philip and his wife were in 41, right next to us. The campground was very quiet, and very well maintained. 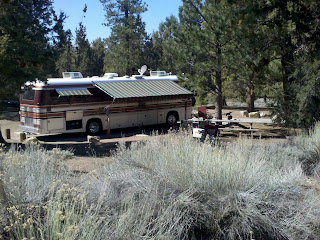 On Saturday we rode into town to find a bike shop where I could have my front hydraulic brake line bled to get out an air bubble that had developed causing the front brake to be useless. We found a shop called "Chains Required" and got the work done in about 20 minutes. 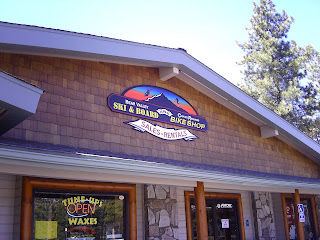 We waited outside the bike shop next to some unmelted snow from the storm last weekend that dumped about 12 inches of snow, most of which melted by this weekend due to warm weather all week. 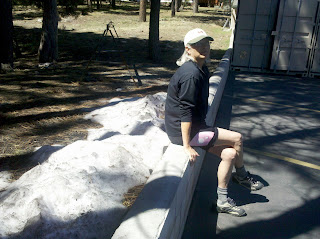 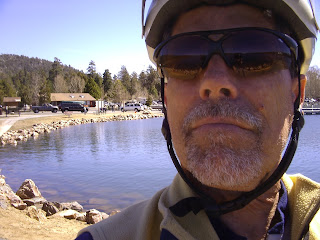 Near the boat launch ramp on the east end. 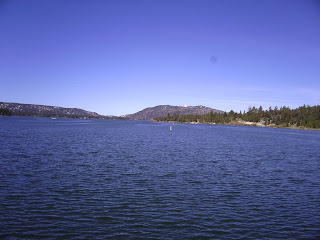 Posted by Whatsnewell at 8:31 PM