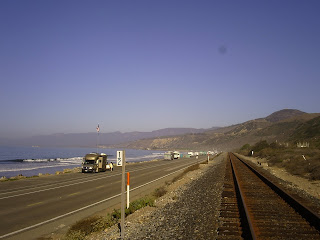 On Monday we only had two cabins to clean so we hit them early, and were finished by 9:15am. Right after that Integrity Mobile Detail arrived to do the monthly wash and detail on our coach....I like to hit the road in a clean coach. Hitting the road means hitting the road north for Rincon Parkway north of Ventura.
The last time we drove the Newell up to Ventura was last February....almost 9 months! Every time we are here I tell Elaine, "Why don't we come here every month?". The weather in November is always nice, and there are no crowds with which we must compete for a parking spot on the "Parkway". There are 127 50' spots end to end on the Parkway. Rincon Parkway stretches about 5 miles from the Sea Cliff exit on the north to the State Beaches exit on the south. It is what is left of the old Highway 1 in this area, which was replaced years ago by Highway 101. The County of Ventura has converted 1 mile of the Parkway to dry camping to the 127 dry camping spots. At either end of this section of the Parkway are two County Parks....Hobson on the north, and Faria on the south. Each of these parks offer a dozen, or so full hookup spots including cable TV. Most the spots in these two parks are just a dozen feet from the surf at high tide. 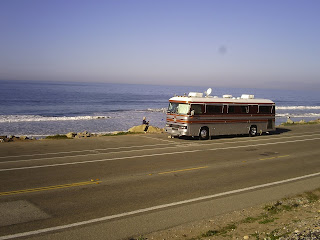 We were able to depart Rancho Jurupa around 1pm.....after a 30 minute stop over at my office to drop off my grandson's BMX bike, which he left behind after his stay with us over the weekend, we entered the 210 FWY and headed west to I-5, and then north a short way to Highway 126, and then west about 30 miles to Ventura and Highway 101. We arrived on Rincon Parkway just after 4:30pm pulling into #119 on the southern end of the dry camping sites. There were probably 2 dozen RV's here when we arrived, and just a few more today (Wednesday). There are 8 empty sites to the south of us, and 2 empty ones north of us, so we are by ourselves.

The first night (Monday) there was a very heavy marine layer to the point of a heavy mist falling. We grilled a couple of filets for dinner and sat by the fire for a while...there wasn't much to see because of the heavy marine layer and fog, but it is one of the things I love about Ventura. The sound of the ocean drowns out any other sounds. 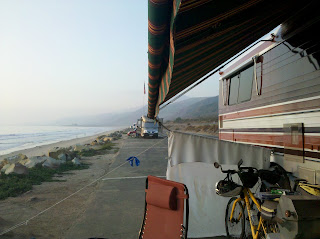 Tuesday morning it was still overcast, but not foggy. I had some insurance work to do, but by 11am we decided it was time for a bike ride. Our destination was downtown Ventura where we always visit Anacapa Brewing Company on Main Street. It is a great, local micro brewery. One of their signature appetizers is sweet potato fries with a honey mustard dip. The ride from #119 is just over 7 miles to ABC, and we arrived there after a 30 minute bike ride. We quickly ordered a plate of the fries, and two Porters. What a nice al fresco afternoon spent sipping Porter and munching Sweet Potato fries. 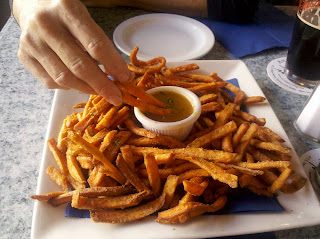 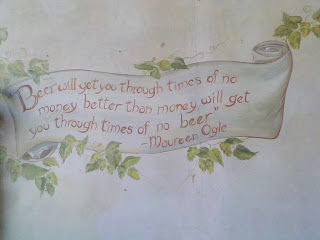 On the wall at ABC

We arrived back at site #119 around 3pm and sat in our recliners watching dolphins swim up and down the beach for the rest of the afternoon. Since we had a big lunch we decided to roast some artichokes Elaine had steamed earlier that morning. So, we sat there watching the sun dip lower in the sky sipping wine, and eating artichokes. What a great end to a great day! 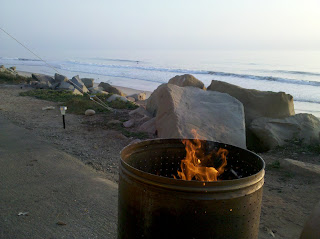 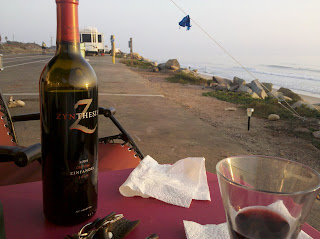 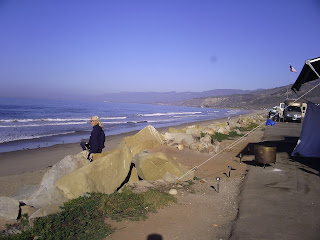 Today, Wednesday, the forecast called for Santa Ana winds, so we decided to stay close to camp....neither of us likes riding bikes in the wind. As it turned out there was NO wind all day, but it was balmy and crystal clear, which is what you would expect with a Santa Ana condition. The day was spent sitting in our lounge chairs reading, watching dolphins again, and two long walks on the beach, and a long nap. Elaine had been marinating chicken all day, and soaking sweet corn in a salt brine, so around 5pm I lit the BBQ and cooked the chicken and corn. We watched the sun sink below the horizon once again and sat until well after dark just watching the colors change, the stars and moon come out, and listening to the soporific sound of the never ending waves. 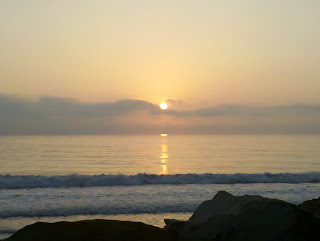 We'll be here two more days, and head back to Rancho Jurupa on Friday afternoon. Tomorrow we're thinking of riding up the Ventura River bike path to Ojai for lunch.

That's it for today....thank you for stopping by!
Posted by Whatsnewell at 8:07 PM