We returned to our home park last Friday to rain, so we had to set back up in the rain, just as we "took down" in the rain up in Ventura. Of course, it didn't rain most of the 2.5 hour drive home, but it rained on each end.

Saturday I had 4 soccer matches at the San Bernardino Soccer Complex in Highland, CA. The weather was cool...for a change, and the day was uneventful. Sunday was a different matter....I had 4 matches scheduled at U.C. Irvine (Irvine, CA), and the weather forecast told of rain starting that morning and lasting most of the day. My first match was at 7:30am, which means I had to leave Riverside around 6am in order to be there 45 minutes before match time. The match got underway to threatening skies, but it was NOT raining yet. We managed to get in 70 minutes of an 80 minute match before it started drizzling, then raining.....that was my match as center referee. The remaining 3 matches I would be an assistant referee. The second match began at 9:15am, and within 20 minutes my sideline was a 50 yard mud path. By the end of that game (a 90 minute match) I was muddy from the knees down, and my shoes resembled large mud clods than shoes. My next match was not until 1:15pm so I decided to take my wet stuff back to the parking structure, and my car, to change into some dryer clothes, and shoes, and steel myself for the next game, and more mud. While I was at the car I got a phone call from the center referee assigned to the 11:15am match saying the replacement assistant referee had not arrived, and would I come back and take his place until he arrived? OK, fine.....I walked back to the field munching on a half sandwich, and arrived a few minutes after game time. The missing referee arrived at half time and graciously offered me half the game fee for filling in for him, which I gladly accepted. It was then I found out this was the last game of the day.....the organizers had decided to cancel the rest of the games that Sunday as the fields were in horrible condition after 3 hours of heavy rain.....so I got to go home 4 hours early!
The rest of the week saw Elaine and I reorganizing some of our basement storage areas in the coach. We had discovered on our trip to Ventura that some things we use when dry camping were left in the trailer, and there were many things that we rarely use. So, we spent the better part of the day pulling things out of several of the storage areas to be sure only the things we need for short trips are there. Amazingly, we have a lot of room left. Somethings went up to my office warehouse where they will remain until we depart. One of the storage areas had room for a shelf, and so we installed a shelf thereby increasing it's capacity by almost twice....very nice! Pictures to follow. 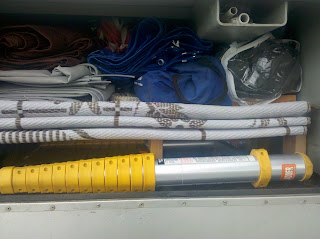 On Tuesday and Wednesday I applied a wood sealer to the plywood pedestal the new toilet sits on to better protect the wood in the event of another leak. Then Elaine created a paper pattern of the platform which we used to modify the carpet piece we had purchased to fit around the toilet base. Instead of stapling the new carpet in we decided to use stainless steel screws with beveled washers so, in the event of a future water leak, we could simply unscrew the carpet and easily remove it, instead of removing 84 staples....lol! In addition we had to replace the quarter round molding that had been damaged by the water leak. It turned out way better than I had imagined. 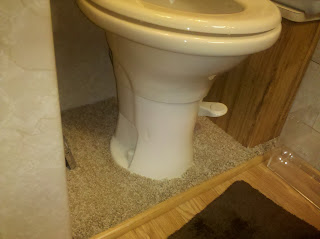 We are now working on how to transport our two Terra Tadpole Trikes, and my mountain bike. We already have the tandem and two road bikes figured out, and now I think we've figured out the final three "bikes"....I know, I know.....who needs that many bikes? At any rate, once I get the necessary hardware I will share with you have we have solved that mystery. For those of you who wonder what a Terra Trike is, here is a picture taken at the top of Towne Pass (between Death Valley and Panamint Springs) on a 465 mile trip I took with a friend a few years ago. The one in front is mine (with a trailer). Elaine's is the same. We call them "rolling lawnchairs". We rode from Furnace Creek (272' below sea level) to the top of Towne Pass (4,956' above sea level) on one leg of this 9 day trip. 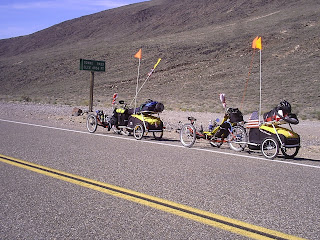 Anyway, that's what's new in our neighborhood. Thanks for stopping by!