An afternoon of conversation......

We had a lunch date scheduled with my Cousin Lois and her husband John at 11:30 am so I spent some time first thing in the trailer moving a few cargo rings around so that their new positions could be better used in securing the cargo for which they were intended.  Several of them I have wanted to move for months, but just never took the time to move the cargo they were securing out of the way in order to access them and move them to better positions.  It's also been a long time since I took out the throw rugs, shook them, and then vacuumed into some of the deep corners of the trailer that are mostly inaccessible when we are traveling and moving on a regular basis.  Even though we are still moving (until later Sunday) I had just reached that point where all that dirt in the corners, and the poor positioning of some of the cargo rings were really beginning to bug me.

We were meeting Cousin Lois (the daughter of my mother's brother, who will always be Uncle Bob to me) and John at Red's Old 395 Grill near downtown Carson City so we left Silver City RV Park around 11:15 and arrived almost exactly at 11:30 am thanks to us making all but one green light on our way up US-395.  As usual Lois and John were already seated and waiting for us.....I so appreciate punctuality!  We quickly settled into the booth opposite them, and began talking (there was some eating along the way, of course, but on this day the food, as good as it was, seemed a secondary consideration), and talking, and talking.....when I finally looked at my watch it was after 2:30 pm!  And that is the way it usually is with Cousin Lois and John.....we never run out of conversation.  We last saw them for dinner last Fall, I believe.....my uncle Bob, who joined us with his wife Jane, was still alive then, but it was obvious that he was failing, and this past January 5th he passed suddenly in his 89th year.  We weren't able to attend the funeral, or memorial service so Cousin Lois saved me a copy of the program for the service, which she brought with her to lunch....thank you so much Cousin Lois!  I will always remember Uncle Bob's dry sense of humor, the great stories he told, and his devotion to his family.....he was a good man and is missed every day. 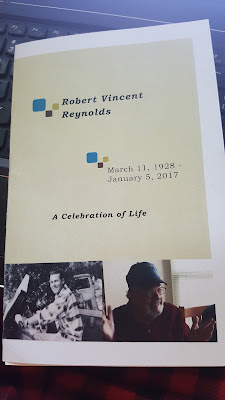 We still had some final shopping and a haircut for moi to accomplish so we said our 'until next times', or as Uncle Bob would have said....."See you again, soon!" and got on our way....we stopped first at the local Supercuts where I got a haircut that will, hopefully, last me until we return to Carson City for another resupply mission in a few weeks.  Next up was Trader Joe's and then we were home by 4 pm.  We hadn't really had any exercise Saturday so we decided to make a couple of laps around the park....1.2 miles in all.....we had planned to maybe walk one more lap, but the wind was beginning gust, and TLE does not like walking in the wind, especially when the pollen count is rising.

Time to begin putting things away for our 40 mile jaunt to TVC*, and spend the next 4+ months working in one of our favorite places on earth!

When you need to by something from Amazon, think of us.......we will appreciate every purchase you make using our Amazon Affiliate link, and  remember, it will not add one penny to your costs to shop using our link, plus we will receive a commission.
Posted by Whatsnewell at 8:38 AM