TLE has not ridden her Cannondale F-600 for over a year.  Yellowstone and the Grand Canyon were just not conducive to bicycle riding.  I did some riding while in Yellowstone on the local highway running into Gardiner, but not in the National Park as there are no shoulders on which to ride a bike, and the traffic was terrible.  The same for the Grand Canyon.....no shoulders, and heavy traffic. I rode my mountain bike one time on a local fire road, but only rode my Cannondale Bad Boy while it was mounted on the bicycle trainer.  I did ride quite a bit while we were in Fontana on the Pacific Electric Trail, but TLE had no interest.  So, here we are in a place where there are 45 miles of carriage roads on which to ride, and TLE gave the go ahead for me to get her bike ready to ride Tuesday.....YAY!

Prior to leaving for our bike ride I spent time building a wooden platform to place between two trees on which to stack our firewood.  I wanted to keep it off the grass and/or ground as it rains on a regular basis here.  I found some scrap lumber (pressure treated) to use, got some wood screws and built the platform in about 30 minutes....I think it turned out well..... 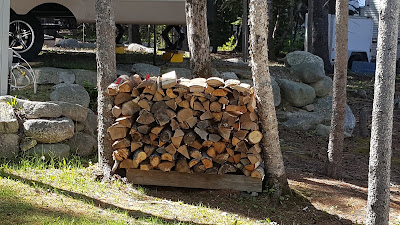 .....previously it was just piled on the ground around our portable fire place....it was killing the grass, and getting quite wet when it would rain.  It looks like a lot of wood all stacked.  This is just wood that campers have left behind since Memorial Day weekend.....we won't have a shortage of wood this summer!

We left SDC to drive over to the carriage roads in Acadia National Park around 1 pm, and arrived about 15 minutes later at one of the trailheads off SR-233 (aka: Eagle Lake Road), quickly found a parking spot (this will be much harder in two weeks) and began our 6 mile loop around Eagle Lake......... 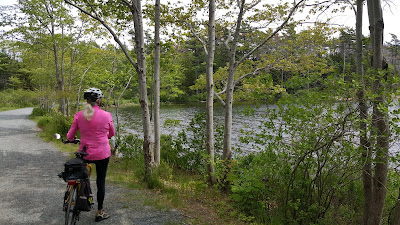 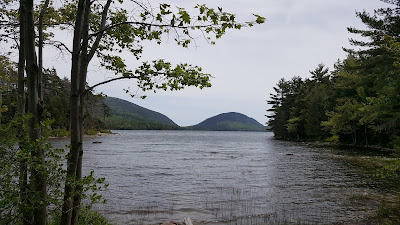 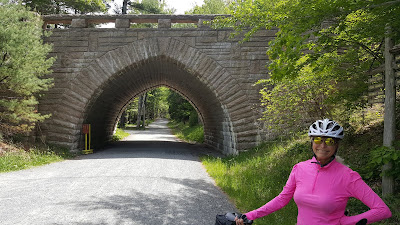 These stone bridges are everywhere 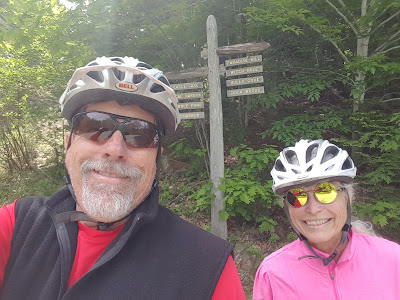 The signage for the various trails is quite good...we never were in doubt as to the proper direction to ride

.....since this was TLE's first ride in over a year we decided to keep it to 5, or 6 miles for her benefit.  She has stayed in shape the past year, but she has had no 'seat time' on her bike, and that is where we all feel discomfort when we have not ridden for a long time.  The carriage roads are all crushed rock just as they have been for over 100 years.  The road we traveled was well maintained, and had several elevation changes up and down as we circumscribed Eagle Lake.  We finished our ride in less than an hour with TLE still smiling.  I hope we can take a longer ride in the near future.

We were only a few miles from Bar Harbor at the Eagle Lake trailhead so we continued on into town to visit a local micro brewery called Atlantic Brewing Company.....what a cool place to spent an hour, or so unwinding from our ride!  We found seats at the bar and ordered a flight of brews (a flight equaling 5 samples in this case).  We ordered (left to right) Lil Guy IPA, Crack A Bone, Prohibition, Island Hopper (wheat ale) and Brewski's Stout.  We rarely like every beer we sample, but that's the point of a flight, right?  In this case we liked every single one, and we both found ourselves ordering a pint of the unfiltered Lil Guy IPA....to be clear, I am not an IPA kind of guy, but this was an exceptional IPA...... 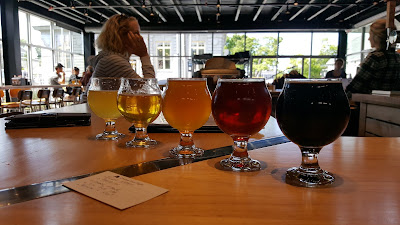 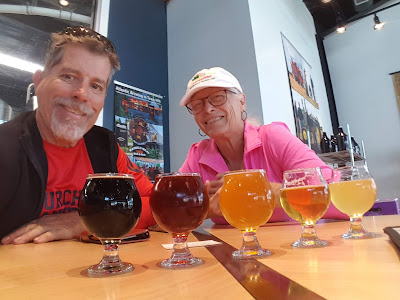 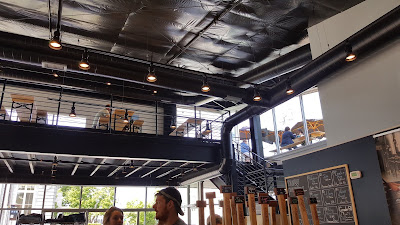 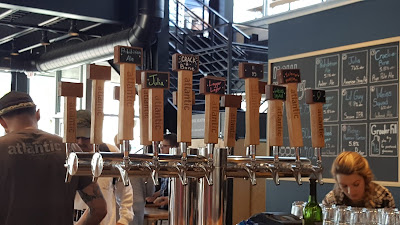 .....to accompany the IPA's we also ordered an appetizer plate of their fish tacos..... 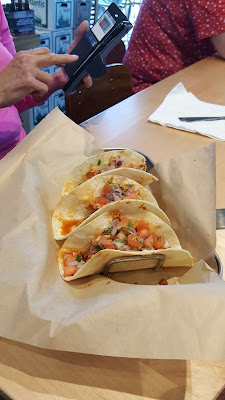 .....can you spell YUMMY?!  We sat sipping our IPA's and downing the fish tacos while talking about our day.  This place is very modern construction, and has a second floor, as well as alfresco dining upstairs, and has a very laid back ambiance.....Yelp gives them a 4.5 star rating on 116 reviews.....we would wholeheartedly agree!

We stopped off at the local Hannaford's grocery store to pick up a few things, and then were on our way back to Southwest Harbor arriving home just before 4:30 pm.  A nice day spent exploring the carriage roads in Acadia National Park.

We had picked up a couple of beef kabobs at Hannaford's to grill for dinner Tuesday evening so I lit the Sea-B-Que around 5:30 pm, and began grilling kabobs around 6 pm.  I had only taken a few bites of my steak kabob when I realized the first two bites were not moving down my esophagus towards my stomach.....they seemed to be stopped about half way down.  I was not in distress, but could not drink water, or eat any further.  I sat relaxing for about 2 hours hoping the food would eventually continue it's journey south, but it did not. About 9 pm I had TLE drive me into MDI Hospital in Bar Harbor to visit their emergency room.  We arrived about 9:15 to find a completely empty waiting room.....how often does that happen?!  I told the receptionist that I had some food stuck in my esophagus and a nurse quickly appeared advising 'this happens all the time!'.  Before I had even filled out my paperwork she took me back to the examination room.  While I was taking off my t-shirt and putting on the ubiquitous hospital gown she returned with a cup of Coke, which she handed to me while simultaneously telling me to take a big gulp.  I did so, but with a little skepticism......at first I thought it was going to come right back up, but then suddenly I could feel the stuck food begin to move and instant relief followed.....WOW!  I hadn't even completed my admission paperwork and I was cured!  The nurse advised this works 80% of the time.....not always quite as fast as it did for me.  She said it must be either Coke or Pepsi Cola....nothing else will do the trick.

I was in the emergency room less than 10 minutes beginning to end, and then we were back in the car on our way back to Southwest Harbor.  We arrived back home just after 9:40 pm.....that has to be the shortest emergency room visit for me in my entire life!  If you have ever had the honor of visiting an emergency room you know what I mean....usually it involves hours and hours of your time.

When you shop Amazon, please use our link (below) to access their website.......we will appreciate every purchase you make using our Amazon Affiliate link, and  remember, using our link will not add one penny to your purchase, plus we will receive a small commission which helps defer the costs of producing this blog each day.
Posted by Whatsnewell at 7:32 AM