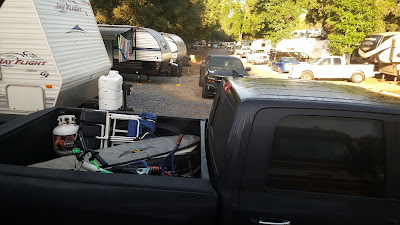 Yup, it is the Memorial Day weekend!

Friday was the first day in many that greeted us with clear blue skies, and it was also the first day in many that the overnight temp dipped back into the 40's.  We were scheduled to begin work at 1 pm working until 8 pm, which was a nice break from the routine of being at work by 9 am.  We took a walk about mid morning enjoying the still empty feel of RORVR knowing that by late afternoon it was be quite a different picture with over 70 arrivals.  After our walk I put out a few more yard lights, dumped the black tank, and then took a nap outside in my zero gravity lounger, something I have not done for quite a while.

We reported to work at 1 pm to a still quiet office, but the fun was about to begin.  After dropping TLE at the office I went to talk with Rich about what he wanted done Friday.  He said he had found a large water leak just outside the pump/filter room for the pool.  While he talked with the electricians I drove my cart up to the pool to inspect the leak.  It appeared that someone in the distant past had put a temporary patch on a pinhole leak in a section of copper pipe just at ground level.  That patch finally gave way, and now it was time to do a permanent fix.

I then drove around park to see if anyone needed help getting into their site, and then returned to the pool area after getting a call from Rich on the 2-way radio that he was ready to begin repairs on the leak.  By the time I arrived he had already begun to dig out the mud around the leaking pipe.  Based on the complete saturation of the ground around the leak it appears this leak as been going on for some time.  The pipe below ground was PVC, but above ground it transitioned to a section about 18" long of copper pipe threaded into a brass shutoff valve.  After shutting off the water we decided to cut the copper section in half then unthread it from the brass valve and PVC pipe, then replace it with PVC up to the valve.

We have a lot of PVC stuff in our supply building, but not exactly what we needed to repair the pipe so Rich headed into town with his notes to buy what was needed.  While he was gone I helped a couple of people get into their sites, then went down to the office to make sure there were not too many RV's at the entry way.  It never got worse than 2, or 3 RV's at one time, and we can stage about 6 before we begin to have a traffic problem.

Within 30, or 40 minutes Rich had returned from town and we headed out to complete the leaking pipe repair.  Within another 40 minutes we had the new section of pipe installed, and the water supply to the pool area restored.

I spent the rest of the day completing the weeding job I began two days prior at the Red Barn.  There was still a section of weeds to be pulled along the south side of the horseshoe pits.  By 7 pm the sun had passed behind the local hills, and it was beginning to get chilly.  I finished weeding just about that time and headed back to the tool shed with my tools.  The rest of my workday was spent in the office, and directing traffic.  It never got real busy, which is nice.  By 8 pm we had about 18 arrivals left on our list, and the park was settling down for the evening.

Since we had lunch at 4:30 pm, which was really dinner, TLE produced a bowl of yogurt and fruit for a snack, and we watched a recorded episode of 'Elementary' (first episode of the final season), and then 'Gold Rush: Parker's Trail' before hitting the sack around 10 pm.  On a side note I have managed to lose 8 lbs. on my current weight loss program (managed by TLE) since my HA on May 13th.  My near term goal is to get down to 195 lbs, which is about 12 pounds away now.

When you shop Amazon, please use our link (below) to access their website.......we will appreciate every purchase you make using our Amazon Affiliate link, and  remember, using our link will not add one penny to your purchase, plus we will receive a small commission which over the course of a year adds up to enough to by a tank of diesel.

Posted by Whatsnewell at 7:39 AM