The heart of the matter... 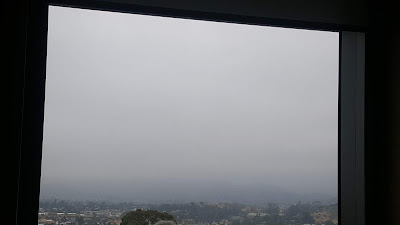 Monday began as a totally normal work day at RORVR.  I was assigned to pressure wash our 5 park models, and after opening the park I stopped by the tool shed to pick up the pressure washer, and hoses..... 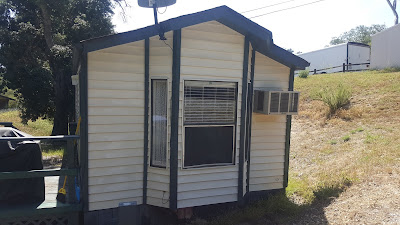 ......I finished most of the first cabin just before lunch, and then finished it quickly after lunch moving up the hill to the second cabin, which took much less time as it was not in as dire a need of pressure washing as the first one was.  As I finished with the second cabin I noticed the picnic table next to it needed cleaning so I went ahead and pressure washed it as well as 4 other tables in the vicinity..... 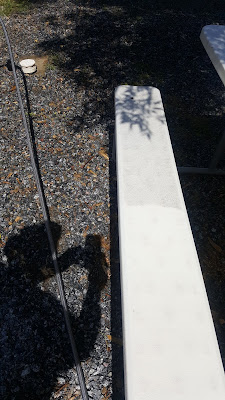 Can you see the line of demarcation between the dirty and the clean portions of the table and bench? 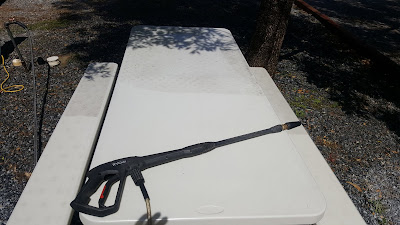 ......by the time I finished pressure washing the tables it was closing in on 4 pm, so I packed everything up and headed for the office to put my tools away and pick up TLE.  We were home a little after 4 pm, and after taking a nice shower sat down to relax, and relax is what I did until about 8:30 pm when I began to feel a tightness in my chest.  The idea that I might be having a heart attack was the furthest thing from my mind for the next 5 minutes, but as the tightness turned to pain, and the pain began to radiate down my left arm I had to face the fact that that was probably exactly what was happening.

About 8:40 pm I told TLE that something was wrong and I didn't feel right.  She asked what didn't feel right and I described what I was feeling.  She suggested that I take my blood pressure, which I immediately did.....the reading?  159/99!  Wow, that is really bad and I am having a real problem no matter what the cause might be.  I asked her to dial '911' immediately, which she did.  As she made the call I went back to the bedroom to lie down on the bed, and she followed shortly thereafter, grabbing my hand and demanding I not leave her....she repeated several times over....."Don't you dare leave me....don't you dare!".  Within 10 minutes the paramedics arrived along with the local fire department.  At one point there were 2 firemen and 3 paramedics crowding back into the bedroom.

Josh and Jersey began to ask me questions, and within a minute there were giving me 6 chewable aspirin, and a shot of nitroglycerin spray under my tongue.  In minutes I went from 10+ on the pain scale to an 8.  They moved me out of the Newell and onto a gurney, then into the ambulance and off we were in a cloud of dust with lights flashing, and occasionally the siren.  We arrived at Palomar Medical Center about 35 minutes later, and within minutes I was in an ER room being examined by an internist, then a cardiologist.  After 3 more shots of nitro, and an intravenous dose of Fentanyl my pain was down to a 1.

By this time it was 10 pm, and the cardiologist was telling me I had experienced a 'small' heart attack.....if that was small I would hate to experience a major one.  The pain became unbearable at one point just before the arrival of the paramedics.  Thanks to Josh and Jersey for stabilizing me, and getting me to Palomar so quickly!

The cardiologist told me they would perform an angiogram on me Tuesday to find the blockage, and then angioplasty.  He advised that if 3, or more arteries were blocked I would have to have bypass surgery, which I was praying would not be the case.  I remained in the ER room until about 7 am Tuesday when another room opened.  Then around 1 pm I was taken upstairs to the OR for the angiogram to be performed by Dr. Mulvihill who is quite the character.  Within an hour they had found the blockage in my main artery (they call it the widowmaker), performed the angioplasty, and installed a stint, and I was on my way to my room in the Cardiac Unit.

I wasn't able to eat anything until after the surgery and by 2 pm I was getting quite hungry as I had last eaten at 6 pm the night before.  Within an hour I had a late lunch, and a cup of coffee.  Since I had to lie flat for 6 hours keeping my right leg straight and immobile TLE had to cut up my food and feed me for both lunch and dinner.  By 10 pm I was able to get up and walk around my room, and that night I slept like a rock.  TLE, bless her heart, was with me every step of the way, and I know she did not sleep well Monday night in that stiff chair in the ER room, but just as always she never complained for one second.

What began as a very benign day ended in drama, but with a good ending.....thank you for your patience, and for stopping by once again!

When you shop Amazon, please use our link (below) to access their website.......we will appreciate every purchase you make using our Amazon Affiliate link, and  remember, using our link will not add one penny to your purchase, plus we will receive a small commission which over the course of a year adds up to enough to by a tank of diesel.
Posted by Whatsnewell at 7:01 PM