We slept in Saturday morning.....well, at least TLE did.  I was up a little after 7 am, while TLE tarried in slumberland until after 8 am.  I walked downstairs to find my son making his first cup of coffee, and got one myself.  One of the things I loved about the last few years of my workaday life was talking with my son at the beginning of each workday.  We shared an office for those last few years before I retired, and I enjoyed those morning talks about this and that.

Soon TLE, Rochelle and our great grandson, Daniel, joined us and Chris proceeded to fix us all breakfast.  Chris and Rochelle agreed to keep Daniel overnight so his mother and father could setup the surprise birthday party for him they had been planning for a few weeks.  Of course, secrecy is the cornerstone of any good surprise party, and all of us managed to keep mum on the birthday subject all morning.  We had been instructed to arrive at the party at 2 pm, to be followed by Chris, Rochelle and Daniel at 2:30 pm.... 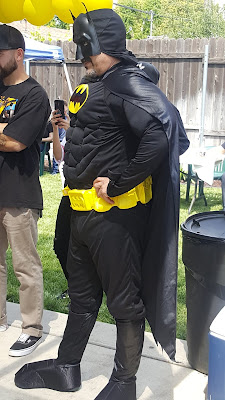 The guests are all poised to yell 'SURPRISE'

......the birthday boy arrived just after 2:30 pm, and the surprise was thorough, complete, and delightful..... 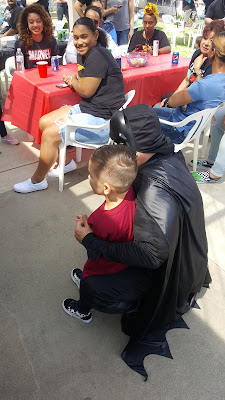 .....all of our kids, and their kids were there, and a wonderful time was had by all.  It had been heavily overcast, and even a little rainy early in the day, but by the time Daniel arrived the sun had finally made an appearance.

We bid our adieus around 4:30 pm and began our 2 hour drive home to RORVR.  I'm not allowed to drive until released to do so by Dr. Dovich, so TLE took the reigns of the Beetle to guide us home.  It was about 6:30 pm (big accident in Temecula slowed us down by 20 minutes) and we were about 3 miles from our freeway exit in Escondido when TLE suddenly announced the car had lost power, and in fact was not generating any RPM's....uh oh.  She was rolling along about 75 mph at the time and we were fast approaching the Deer Springs Road exit (#37) so she just coasted up the off ramp coming to a stop on the shoulder just short of Deer Springs Road.  So there we were just 29 miles from home, but no longer getting any closer.  As we were coasting off the Interstate I noted there were no warning lights on the instrument panel.....the car just stopped running.

We let the car sit for a few minutes and then attempted to restart it, it tried to fire, but no dice.  It would turn over, would sputter for a second, but would not fire.  If it had been an electrical issue there would have been a light on the instrument panel, so I suspected the engine was getting no fuel.  While there are several possible culprits which would cause the problem, I suspected the fuel pump had failed.  This happened almost exactly 4 years ago when we were boondocking at Goosenecks State Park in northern Utah, and the symptoms were the same.

So, what to do, right?  We have Good Sam ERS for just such emergencies, so we called them to get a tow.  Keep in mind it was going on 7 pm by this time, and most repair shops are closed on Saturdays, and any others that might have been open on Saturday, were now closed.  Getting a tow to a local repair facility where they would not be able to repair the car until Monday was a 'no go' for us, so we wanted to be towed back to RORVR, and then I could order a fuel pump off Amazon and have it Monday, or Tuesday.  It's an easy repair, and takes less than 30 minutes to remove the old one, and install the new one.  I did it myself 4 years ago with the aid of a 'YouTube' video, and my good friend Tom McCloud.

Good Sam ERS initially found a local towing company to come pick us up, and gave us an ETA of about 55 minutes for the arrival of the tow truck.  All seemed well, but over the next 90 minutes we were advised three times the tow company had been changed.  In addition, we were advised they (Good Sam) would only pay to tow us to the closest qualified repair facility in Escondido (of course they would not be open for business again until Monday morning), so if we wanted to towed back to RORVR it would cost us $98 for the remaining distance from the repair facility to RORVR.  Okay, well, we're stuck, so we agreed.  By 8:20 pm the assigned tow company had been changed twice, and the current one would not arrive until after 9 pm.

As one might imagine I was getting just a tad put out by the seeming incompetence, and inability of Good Sam ERS to get us towed.  I remembered that I have roadside assistance coverage on my Safeco insurance policy, so I called them.  They advised me I had unlimited towing coverage, meaning they would tow me as far as I needed to be towed at no charge to me.  Well, that was a no brainer to me, so I set things in motion with them.  Within 5 minutes I had a call from the tow truck driver advising he would be at our location in 15 minutes.  I immediately called Good Sam back and cancelled their service, and within 15 minutes Scott from Roadway Towing arrived, and a few minutes later we were on our way home.

Just after we bid adieu to Scott and headed inside to unwind I noticed it was exactly 10 pm.  If Good Sam had been half way competent we should have been home by 8:30 pm.  We had a similar experience with AAA back in April of 2015 when the fuel pump failed in Mexican Hat, UT (you can read about that experience here), and we ended up cancelling our AAA service over that debacle.  While this current Good Sam ERS experience was not as bad as the AAA experience, their inability to find someone to tow us over a 2 hour period when we are right in the middle of SoCal where you are never more than a few minutes from a major city, or town was startling to say the least.  Safeco, on the other hand, had us taken care of in just minutes.....I wish I had called them first.

So, thank you very much Mr. Jello for all the fun Saturday evening.  All's well that ends well, and it did all end well.....thanks for stopping by!

When you shop Amazon, please use our link (below) to access their website.......we will appreciate every purchase you make using our Amazon Affiliate link, and  remember, using our link will not add one penny to your purchase, plus we will receive a small commission which over the course of a year adds up to enough to by a tank of diesel.
Posted by Whatsnewell at 11:03 AM