As I had hoped, the final round of the British Open 2017 was a 'barn burner'.......Jordan Spieth began the final round at 11 under par, but by the 13 hole had slipped back to 7 under par when he carded his 5th bogey of the day against one birdie.  At that point he was 1 stroke behind the new leader, Matt Kucher.  That he managed to only bogey the 14 hole was a miracle in itself, and maybe portended what was about to happen.  Over the next 5 holes he, Jordan, went 5 under par to win The Open by 3 strokes....... 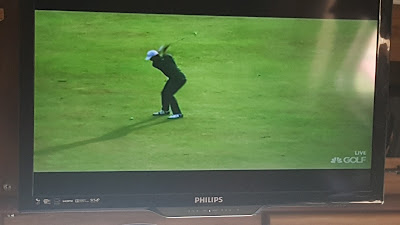 .......his tee shot on 13 ended up on the opposite side of a high sand dune from the 14th hole.....at least 100 yards off course.  He then had to declare an 'unplayable lie' and move the ball another 75 yards away from the 13th hole to an area where he could drop the ball and still have 'line of sight' to the hole.  His 3 iron shot made it almost all the way to the green coming up about 7 yards short.  He then chipped the ball on to the green within 10 feet of the hole and sank the putt for a bogey.....it could easily have been a triple bogey, or worse.  At any rate, that was the turning point.  His tee shot on the par 3 14th hole was almost a 'hole in one', but he did get the birdie.  The 15th hole, a par 5, he drove in two shots, sinking a 25 foot putt for eagle, and so the story goes.  Jordan has now won his 3rd different 'Major' before the age of 24 (Masters, US Open, and British Open), and now has the chance in two weeks to win the PGA, which would give him a 'Career Grand Slam' before the age of 24.....something even Tiger Woods did not accomplish.  So, the 2017 version of 'The Open' is in the books.

Around 7 pm I took some trash out to our dumpster to find an elk cow, and her calf walking across the parking lot.....that's the cool thing about Yellowstone.....you never know when, or where you are going to see the local wild life. Some people go out and hike for 21 miles and might see only a bird......hang around the Mammoth Hot Springs General Store and you will probably see elk and antelope, or a bear on a regular basis. 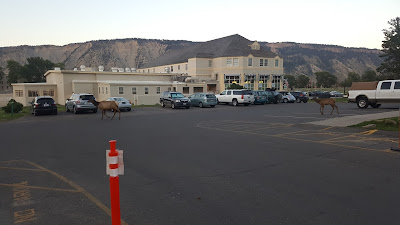 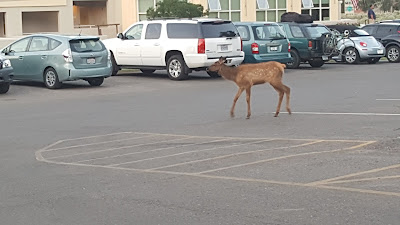 When you need to buy something from Amazon, think of us.......we will appreciate every purchase you make using our Amazon Affiliate link, and  remember, using our link will not add one penny to your purchase, plus we will receive a small commission.
Posted by Whatsnewell at 6:52 AM