We awoke Friday at high elevation for the first time in months.....we have not been too far from sea level for a long, long time, but now we find ourselves in the northern Sierra Nevadas at 4800' staring at the snow clad mountains surrounding the Lake Tahoe Basin with anticipation of a great summer to come, but first things first.

We always stay near Carson City, NV for 1-3 days prior to grinding up the Spooner Summit grade and into the Tahoe Basin for the summer.  We stock up on Trader Joe's, COSTCO, Target and Walmart supplies, and then do some serious 'junking' looking for an extra coat, pair of shorts, or shirts to be worn this summer.   Typically, when we arrive in South Lake Tahoe is is late April, or early May and the weather at 6,300' elevation this time of year reminds me more of winter than spring......by the end of June it will be nothing but t-shirts, shorts and flip flops on our off days, and by the end of August we will have run our A/C a couple of times.  You need a wardrobe that run the gamut of weather conditions for the next four months, because you will see them all from snow, to rain, to sleet, to fog, to wind, to warm, sunny days without end. 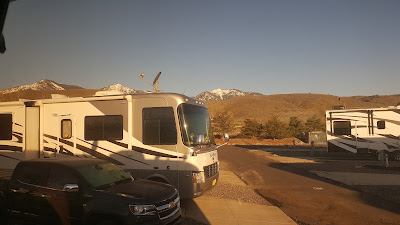 First up Friday morning, however, was a call from my sister Jill who lives in Michigan near Ann Arbor.  I haven't talked with her in a while, and I know she is struggling with the imminent death of her husband due to a long terminal illness.  We usually talk on the phone while she is taking a walk down a country lane near her home, and she was out early Friday doing just that.  We talked for about 30 minutes.....I was encouraged to hear her infectious laugh throughout our conversation as I tried my best to inject a little humor into her situation, although she seems to be doing very well in spite of the circumstances.  She is a strong woman, and I know she will come through this in good shape.

Next up we removed the VW from the trailer so I could organize it for limited use for the three days we will be in Carson City, and then did my workout whilst TLE did the same inside the Newell.  Around noon time we headed out to visit the numerous thrift stores in the area, and there are many (Goodwill, Salvation Army, Classy Seconds Thrift Shop, A to Zen, Carson Treasures Thrift Store, Reruns, etc.).  By the time we had run through all of them it was after 2 pm and we were both getting famished so we began driving south on Carson Street (the main drag) past the Capital buildings (Carson City is the capital of Nevada)......as we came even with a place called 'The Fox Pub' we both said almost simultaneously, "That's the place for lunch!".....and that is where we ate.  We quickly found a parking spot, and walked inside....it was about 2:15 pm so we were well past the lunch crowd...... 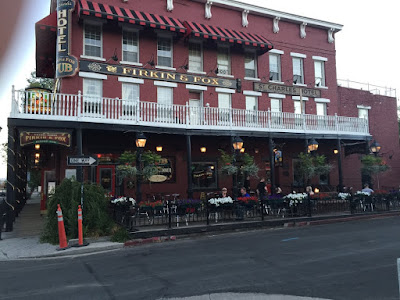 .....usually we check Yelp before we walk into any eatery, but we just went on instinct, and were not disappointed.  This place used to be part of a chain called 'Firkin & Fox', but this particular store has separated from that chain and is now called 'The Fox Brewpub', or just 'The Fox'.  Their ratings are still suffering from their past association with 'Firkin & Fox' and their terrible service.  After we were seated I looked them up on Yelp and initially saw most of the recent reviews gave them 4, and 5 stars, but the further back you went you saw a lot of complaints about slow service.  Our experience reflected that of the recent reviewers, and we would be solidly in the 4 star camp.

I immediately ordered a 20 oz. glass of their High Sierra Brewing Company Irish Red Ale, and TLE a pint of their Lagunitas Little Sumpin' Sumpin' (IPA)....we both loved our choices...... 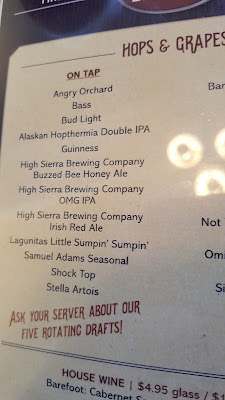 .....for lunch I ordered their 'Angry Fish Tacos' which comes with fries and this amazing hot sauce......I dare you to pour all of the hot sauce on your tacos......this is some of the hottest sauce I have ever had, but delicious....... 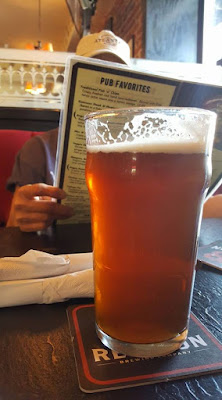 .......we sat inside even though they had a wonderfully large alfresco dinning area as it was a little chilly to be outside in the shade.  Our service was top notch, and our food, which was served within minutes of our order being placed, was wonderfully fresh and rustic.  As we walked back to our car I was still feeling the heat of that amazing hot sauce......mmmmm!

We stopped off at COSTCO to pick up a bag of San Francisco French Roast coffee beans, and a rottiserie chicken before heading for home where we arrived just after 4 pm......a great first day at elevation.

We appreciate every purchase made using our Amazon Affiliate link!
Posted by Whatsnewell at 8:38 AM