We woke up Sunday with plans to take a bicycle ride, but knew we would have to get an early start to beat the arrival of the forecast rain at 1 pm, so around 9 am I went out the trailer to check the bikes over to be sure they were ready to ride......by 9:30 we were ready to go so I began loading the bicycles on our Küat Sherpa bike rack for the 3+ mile drive over to the Coyote Creek Bike Trail......as I was loading our neighbor, Chuck,  here at the San Jose Elks Lodge walked up and said we could access the trail from the Elk's Lodge by using local bike trails that eventually connect to the Coyote Bike Trail.  So, I unloaded the bikes and we headed across the street to the beginning of the local bike trail.....if we had not followed Chuck's advice we would had a much more abbreviated ride, as it turned out later.

The entrance the local trail is not intuitive, but with the help of Chuck's 'local knowledge' we were able t find it......the trail follows along the eastern side of SR-87, and one cannot help but notice almost immediately that there is a significant homeless problem in this part of town......the picture below is just one of dozens and dozens of encampments between the freeway (SR-87) and the local railway....... 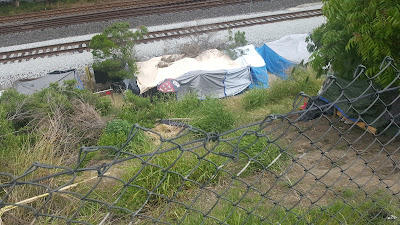 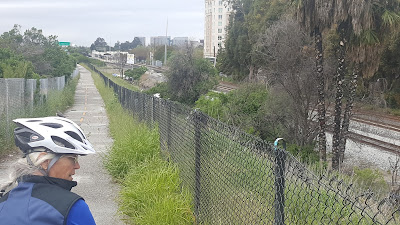 ......the bike trail itself is in poor repair, and shows years of neglect, and to some degree I am sure the homeless encampments contribute significantly to the ubiquitous piles of trash all along the trail.

Eventually we arrived at the trailhead for the Coyote Creek Trail and began our ride southward.....once again we observed numerous large, well developed homeless encampments, and were additionally disappointed in the amount of trash visible from the trail.

At about the 2 mile mark on the Coyote Creek Trail we came to a road block of sorts......

No way are we trying to cross that! 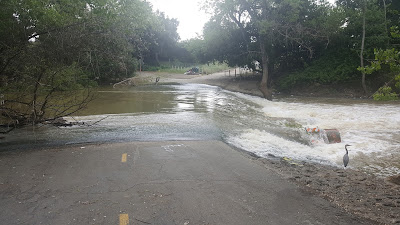 .....apparently water was being released from a reservoir upstream and the resulting water flow was about 100' wide and 1' deep.....no way we are passing through that! 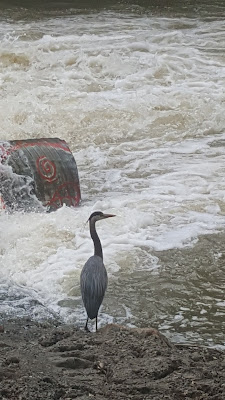 This egret was wondering about our intentions

.......so, we had to turn around after just 2 miles on the trail.....as I said earlier, it was a good thing Chuck provided us with the 'local knowledge' he did, otherwise we would have had just a four mile ride instead of the 11.5 ride we ended up having.  About half way back to the trailhead I heard TLE call my name quite loudly.....she was about 100 yards back and just out of sight around a bend in the trail.....I turned around and rode back towards her voice......apparently she had a flat tire.....why is it always the rear tire? 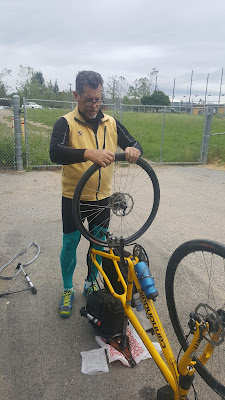 We quickly found a 'turnout' on the trail and began the task of fixing her tube......during the process I discovered, much to my chagrin, that TLE's rear tire is due for replacement.....it has become so thin that it is easily punctured, which is what happened.  I fixed the tube, and then reinstalled the tire hoping we could make it back to the Elk's Lodge without another flat....... 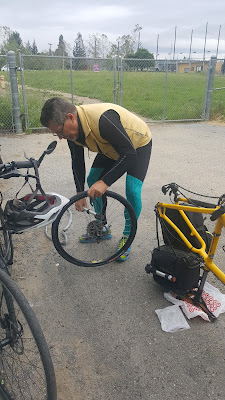 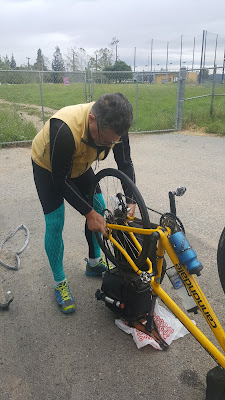 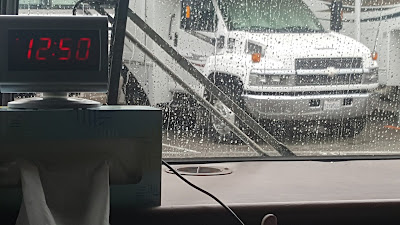 Around 2:30 we got dressed up to drive over to the home of our friends Don & Josie Neff (I've known Don since Junior High School) about 10 miles away to hang out for a few hours, and then go to dinner around 7 pm with them at a local Mediterranean place called Caspian Village (Yelp gives them 4 stars on over 200 reviews).......the food was amazing!  I had the Lamb Kabobs (you can order extra meat, which I did).....TLE had the Lamb Curry.  This is one of those cool little 'hole in the wall' type places in a strip mall that you might easily overlook....Don and Josie have been going there for years, and are well known by the staff.  We sat talking and eating for over two hours and pretty soon it became apparent we were the only ones keeping the restaurant open, so at 9 pm (closing time) we got ready to leave......thank you Don for treating us to dinner!

We drove back to Don and Josie's home where we talked for a while longer then bid our adieus......as we drove home with smiles on our faces we noticed the clouds were lifting revealing the distant city lights of San Jose......a nice ending to a great day!

We appreciate every purchase made using our Amazon Affiliate link!
Posted by Whatsnewell at 8:27 AM