Who could ask for more?

I began Sunday thinking about how I was going to get our tanks dumped when we leave on Monday......the dump station here at the Oceano Elks Lodge is in a location relative to our site that without a lot of maneuvering will be impossible to reach, and maneuvering in a tight area such as we find ourselves is a formula for unhappiness, and possible property damage.  I initially just thought we would dump when we arrive at the San Luis Obispo Elks Lodge Monday, but that didn't appeal to me either.....when you get to your destination you just want to park the RV and get set up.....not spend 20 minutes draining the effluent out of your waste tanks.  Suddenly it occurred to me that we are only about 100 feet from the actual dump station so why don't I use my macerator pumps and long hoses to transfer my current batch of effluent.....of course.....that's a perfect solution.....I don't have to drive anywhere, just get out my equipment and take care of business, and that is exactly what I proceeded to do.

By 11 am I had drained the black and gray tanks, put everything away, and was seated in front of the TV for the start of televised coverage (11 am) of the 4th and final round of the 2017 version of The Masters......within a few holes Sergio Garcia (Spain) and Justin Rose (Britain) had separated themselves from the field by a few strokes, and it became a match play tournament.  They teed off at the 18th and final hole tied at 9 under par, and finished the 18th with both just barely missing birdie putts to win so it went to 'overtime'......they went back to the 18th tee and thus began the sudden death playoff.......Justin Rose hit a bad tee shot into the trees and had to chip out.....he was essentially hitting '3' from the same spot from which Sergio Garcia was hitting '2'.......ultimately Rose bogeyed the hole, and Sergio Garcia sank a 10' putt for birdie (see below) to win...... 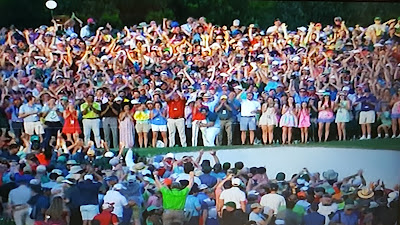 The 'birdie' putt drops for the win! 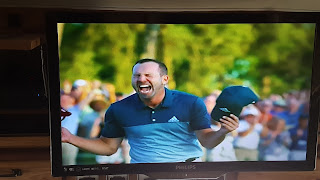 Both TLE and I were in such a buoyant mood that we decided to go out for dinner to a local brew pub we had noticed just off SR-101 on our drive back from San Luis Obispo the other day.....it is in Shell Beach....about 3 miles away....... 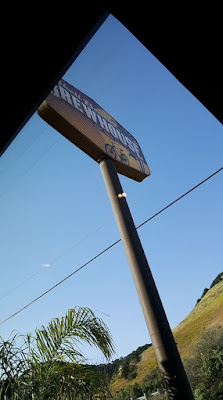 ......and is called, appropriately 'Shell Beach Brewhouse' (Yelp give them 4 stars on 417 reviews.....pretty solid, but could they live up to it?).....they have some 30 brews on tap.  We arrived just after 5 pm, and were seated within seconds even though it was obvious they were quite busy.  We had barely reviewed the draft beer list when our server arrived and took not only our order for beer, but for our dinner.  I chose Heretic Chocolate Hazelnut Porter, and TLE chose a rotating nitro milk stout (I forget the brewery name).......we split an app (Shrimp Ceviche.....yum!), and then split an entrée (Sunset Sirloin Dip.......double yummy!).   It is always a pleasure to dine at an establishment that understands good service, and these guys have it down to a science....we never felt hurried, or rushed, but never, ever had to ask where our server was, for our check, or anything.....we just enjoyed the ambiance, brews and food.....all were superb, and made even better by great service.

We were back home by 6:30, and settling in for the evening......I watched the first of three episodes chronicling the life and times of Jack Nicklaus who is the greatest golfer of all time, and that is just not my opinion.....it is a fact......he has won 18 Majors (the Masters 6 times), and finished SECOND 19 times in Majors (Masters, U.S. Open, British Open, PGA).....the list of accomplishments is staggering.....looking forward to the final two episodes Monday and Tuesday night.

Our stay here at the Oceano Elks Lodge has exceeded our expectations......it is a great location.....we are almost sad that it is time to roll our wheels, but roll them we must.....South Lake Tahoe is beckoning.

We appreciate every purchase made clicking on our Amazon Affiliate link!
Posted by Whatsnewell at 8:43 AM