Monday was our getaway day from Oceano.....next destination.....San Luis Obispo and the local Elks Lodge.  Our destination was only 13-14 miles distant so there was no great hurry to get on the road.  For such a short drive there was no point in putting the Beetle in the trailer, so we did not.  It's funny though......even on such a short drive I feel sort of 'naked' without TLE as my co-pilot.....I really hate changing lanes in town, or on the freeway without her to verify it is safe to do so......the Newell has enormous blind spots, as one might imagine.  When I am by myself I always try to start out in the correct lane which sets me up for the next turn to avoid having to make mid block lane changes.  That strategy works pretty well for me 99% of the time, and on Monday I was able to avoid unnecessary lanes changes 100% of the time. 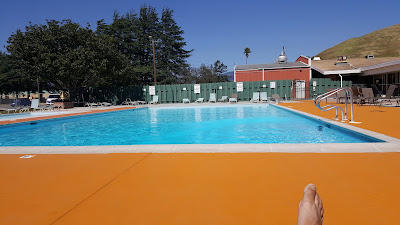 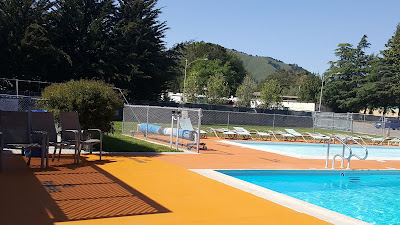 .....it was mostly sunny Monday afternoon so after doing our individual workouts TLE and I walked over to the pool to sit in the sun, read, and ultimately spend some time in the Jacuzzi.....we had the whole place to ourselves all afternoon......sweet!

We spent the evening watching the 2nd episode of 'Jack'....a three part documentary about the life and times of Jack Nicklaus, and then the first episode for season three of 'Better Call Saul'......TLE made some amazing corn chowder for dinner, and I cherished every single bite of this perfectly flavored and seasoned soup.....yum!

Some of you might wonder why we are staying at so many Elks Lodges on our way up the California coast......if you have ever traveled this part of the California Coast during Spring Break, or during the summer you know that it is not only quite expensive to stay in RV parks, State Parks, etc. along the coast, it is also almost impossible to get into any of them on a first come, first served basis, let alone get an advance reservation during this, the Spring Break season.  Spring Break begins around March 1st and goes right up to Easter Sunday.......about 6 weeks.  Additionally, there are really no places to boondock for rigs our size (62' long).  On the other hand there are many Elks Lodges along the coast......many within just a block to a few miles from the ocean, relatively inexpensive ($15-$25/night), they are rarely ever full to capacity, and most are first come, first served, which fits our travel style nicely.

We appreciate every purchase made clicking on our Amazon Affiliate link!
Posted by Whatsnewell at 8:42 AM