Monday being a travel day we were both up relatively early and thinking about the day's drive which would take us through the 'Bay Area'......this part of our drive north has been kind lurking out there our entire drive up 'Coastal California'.....there are about 90 miles of heavy, sometimes stop and go traffic to get around the 'Bay Area', and I have been dreading this day for the last few weeks......there are three possible routes through, or around the 'Bay Area', all of which pass through dense population areas with notoriously heavy traffic.... 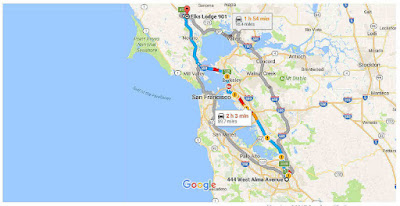 .....SR-101 (the route on the left) goes through San Francisco, and across the Golden Gate Bridge and would take about 4 hours.....the route on the right (again, above picture) is almost 10 miles longer than the middle route, and only saves a few minutes, so we chose the middle route.....the lesser of all evils.  In order to avoid driving through San Francisco on SR-101 we opted to take SR-87 to I-880 to I-580 which eventually joins up with SR-101 again to the north of the Golden Gate Bridge.

Our goal was to depart the San Jose Elks Lodge no earlier than 10 am to avoid the rush hour traffic and just get the bad traffic......not the really, really bad traffic.......as we edged out of the Lodge parking lot I looked at the clock to see it was 10:06 am.  The initial leg of our day's drive took us north on SR-87, a terrible road surface, to the Taylor Ave. exit where we had to drive about 2 miles on surface streets to get to I-880.  Once we were on I-880 the road surface was much better, and initial traffic was not too bad, although quite congested.  As we neared Oakland we transitioned to I-580 which would take us over the Richmond-San Rafael Bridge.  The section of I-580 that passes through Oakland is terrible.....much of it is an elevated roadway and is quite uneven.  Eventually I-580 merges with I-80 for a few miles and for about 2 miles you have 7, or 8 lanes of very heavy traffic which gradually reduces lane by lane down to 4 lanes.....the result is bumper to bumper traffic....I wish I had asked TLE to take some pictures.   I did, however, ask her to take the picture of us crossing the aforementioned Richmond-San Rafael Bridge......

.....many of the bridges in the Bay Area have tolls, and the Richmond-San Rafael Bridge is no exception......our cost for 4 axles (two for the Newell, and two for the trailer) was $20.....ouch!  Once we were on to the bridge the traffic thinned out significantly...... 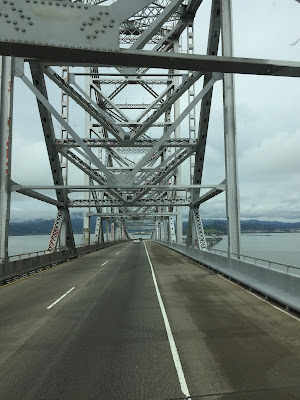 .....and I began to relax just a little, but by that time the damage was done.....I had a headache that required some vitamin 'I' (ibuprofen).  TLE, bless her heart, had been waiting to go to the bathroom for about an hour until we got out of the heavy traffic......I really need her assistance in heavy traffic, when we are changing lanes, and when it is time to change from one Interstate to another.......once we were across the bridge and it was obvious traffic was less congested she took her potty break......thank you TLE!

We arrived in Petaluma just before 12 pm, and within minutes of exiting SR-101 we were dropping our trailer in the Petaluma Elks Lodge parking lot so we could back the Newell into site #6 for the next three days.  While the sites at this lodge are pretty short, they offer full hookups including 50 amp electrical.......we have not had a sewer connection for a few months now, and rarely have had 50 amp so this is an opportunity to wash some clothes, and take some long, hot showers!

For the first time I was able to use the 'Trailer Valet' on pavement.....instead of just backing the trailer into one of the parking sites using the Newell, I disconnected it and used the 'Trailer Valet' to back it into the site.......much, much easier than maneuvering our entire 62' in a tight parking lot!

By 1:30 pm we were set up and I was sitting in my recliner letting the tension of the day's drive ooze out of my system......the rest of our drive to SLT will seem like a vacation when compared to the last 90 miles through the 'Bay Area'.

We appreciate every purchase made using our Amazon Affiliate link!
Posted by Whatsnewell at 8:43 AM