The idea for a "mini rally" in Spearfish, SD was originally conceived by my friend Todd Flickema and myself close to a year ago just after he had purchased his new to him 1984 Newell 40' coach.  We had been talking on the phone, and exchanging e-mails for a while, and I was interested in meeting he and his family at some point.  We knew we would be passing through this area in May, or June so we decided to hookup in Spearfish.

I mentioned what we were planning on the Newell Gurus website and before you knew it we had about 5, or 6 more people interested in joining us.  Todd graciously did all the leg work to locate a suitable park for us and the rest is history.  We now expect to exceed 30 coaches at this "loosely organized" mini rally.  Fortunately the group we have assembled here love the idea of "loosely organized".......most, if not all of us have retired from the "organized" world, and really don't like schedules, but are able to tolerate "loosely organized" ones.

Here are some of the coaches (note that there are a couple of Foretravels in the group) that have arrived as of Saturday afternoon: 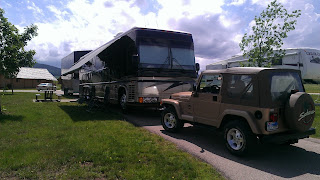 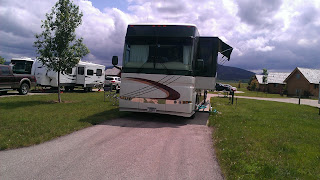 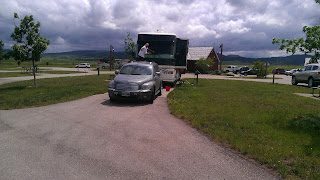 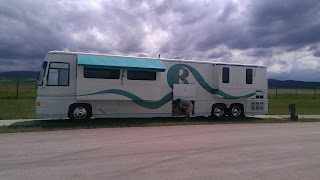 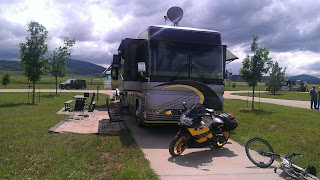 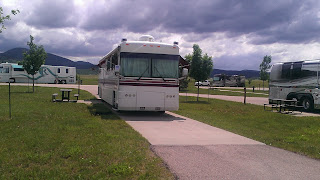 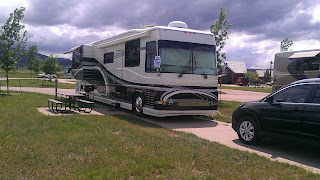 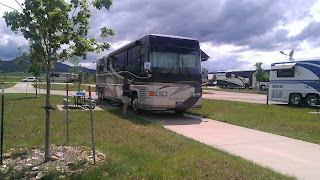 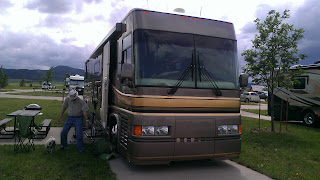 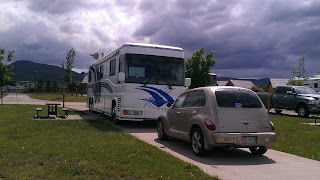 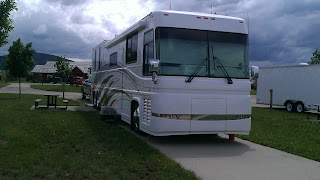 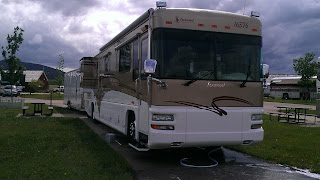 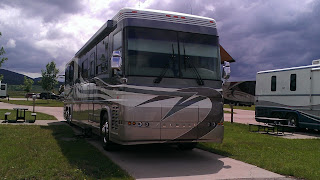 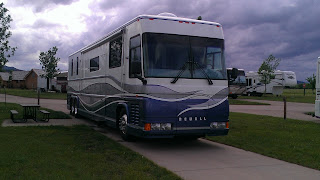 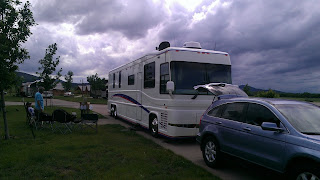 Since I took these pictures more coaches have come in and I will endeavor to photograph them for you and post them in tomorrow's blog offering.

Saturday was mostly delightful weather.....partly cloudy, and almost no breeze.  As coaches would arrive we would go out to great old friends, and new friends.  Some we have not seen since 2009...the year of our last mini rally.....but it only seemed like a few months.

In between coach arrivals those of us already on site were washing and detailing our coaches.  I had to wash a 1200 miles of road grime, and rain off of mine....fortunately the work I did before we left Indianapolis made the cleaning easy, and I was done in less than 2 hours....and that included going up on the roof and washing it off also.

While I was thus engaged TLE found a hairdresser in Spearfish and took off to have her hair cut.  Just as I was finishing she returned......she found a good stylist......her hair looks wonderful, and she is happy.....which, in turn, means everyone in our coach is happy!

Around 5 pm it began to get very dark and ominous, as well as very windy. I had just printed off something for Tom and was in the process of walking it over to him when Tom pointed behind me and said "GET YOUR AWNING IN QUICK!!"....I turned to see this wall of water coming at us, and felt the force of the wind pushing it.  I handed the printed form to Tom and sprinted back yelling for TLE to help put in the patio awning, which was my main concern.  We quickly got it down just as the wind really hit with the torrential rain.  While TLE put in the rest of the window awnings I rushed inside to stow the satellite dish.

We got a little wet, but got inside just as the monsoon hit......with it came heavy winds....probably in the 60 mph range with grape sized hail mixed in with the rain.  There were hundreds of lightning flashes, and the coach began to rock back and forth.  Within about 10 minutes the worst had passed, but the rain continued on for a couple of hours at a pretty hard, steady pace.  We suffered minor damage to the roof vent on the trailer....well, actually, it looks like someone shot it with a shotgun.  I just finished ordering a new one from Amazon Prime....it will be here Tuesday!

During all of this our friends Todd and Dawn Flickema arrived.....nothing like setting up in the rain.....well they didn't....they opted to go to dinner, and returned after the rain had stopped, and then hooked up.  I went over with Todd how to hook up the water, and which valves must be opened and closed.

The Blackhawks were playing the Bruins in the NHL finals, so I watched most of that game....the 'Hawks ended up winning in regulation (for a change) 2-1.  They are now ahead 3 games to 2 in the best of 7 series.

That was the first day of the not so "mini rally".....thanks for stopping by!
Posted by Whatsnewell at 7:55 AM