Newell Gurus Mini Rally - Day # 3 - Do It Yourself

Day # 3 started out clear, windless, and warmish and ended windy, cold and rainy.  In between I worked on a couple of projects.  The first was installing a "cam bar door latch" on the passenger side door on the trailer.  I have wanted, for some time, to add this additional security to this door.  The other two ramp doors have two of these each, but this door had a rudimentary lock that could be compromised easily with a crow bar.  Well, now it is secure also. 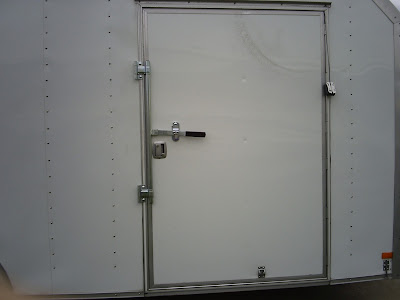 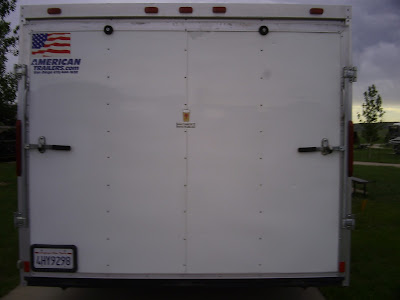 Existing cam bar door latches on back and drivers side 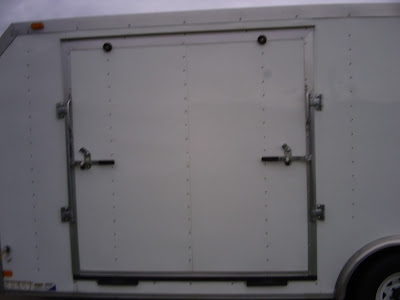 Of course any "do it yourself" project requires, at the very least, two trips to the home improvement store (Ace Hardware affiliate - Knecht Home Center), and that is what was required of me for this project.  It took a few hours to complete, but it turned out great.  As I worked the temperature increased steadily to the point where I had to open the ramp door on the drivers side (above) to let air move through the trailer.  In spite of that I was wiping sweat from my eyes all morning.

As I worked coaches continued to arrive....I counted at least 3, or 4 during the the "latch" installation.  After I finished admiring my work it was time for the guys I had hired to come and power wash my massive radiator.  It has been almost a year since I last power washed it, and that cleaning job has held up well, but on the drive up from Sioux Falls I noticed the engine temps running about 5-6 degrees warmer than normal.  The best time to take care of this is when you first starting noticing temperature increases, because it only gets harder to clean it later.  As it turned out it took about 30 minutes of applying degreaser and power washing to sufficiently clean the radiator.  Based on the amount of black gunk that ended up on the pavement under the radiator we (they) accomplished the mission.  It was worth $40 to me not to have to get filthy.  As I stood there watching the two young guys do the deed I also noticed them getting dirtier and dirtier.  By the time they finished they had to go home and change clothes before they could go on to their next job......:-)  When we visit our friends, Bog and Karen on Whidbey Island later in July I will make use of his power washer with heated water (250 degrees) to completely get all the gunk removed.

Just as they finished I noticed our good friends Forrest and Mary Clark arriving in their new to them 1996 Foretravel.  They are on their way to Gillette, WY to attend the Escapees RV rally, and decided to stop off and visit for a day.  When we first met Forrest and Mary in Cedar Key last January they were in a 34' Class A gaser (gasoline powered).  They had purchased it brand new in 2012, but were disappointed in how poorly it was standing up to travel and full time living.  Forrest told me it  was "literally falling apart around their ears" as they drove down the highway.  After touring our coach and another Newell (Forest and Cindy Olivier's) that arrived in Cedar Key they decided they were going to trade their gaser in on an older well built coach.  Ultimately that coach was the 1996 Foretravel they now live in, and they are very, very happy with the change.  Foretravel is known industry wide for the quality they build into their coaches, and this coach is a fine example.

A friend took this picture of my friend Richard Entriken, but I am posting it to show you Forrest's 1996 Foretravel in the background.  Richard is building up a new tandem frame....why is an interesting story.

You can see the dark skies lurking in the background of the above picture, and within 30 minutes we were all putting in our awnings as the wind picked up, and the rain came.  The rain was short lived, but the winds continued all night gaining in ferocity as dawn approached.  Finally, as I sit here writing, the winds have abated.  They made sleep last night difficult as the coach rocked and rolled most of the night.  Around 4 am as the velocity noticeably increased I got up and cranked down the satellite dish.

We were supposed to do our first round of coach tours last night starting at 6 pm, but the wind and sporadic rain seriously dampened enthusiasm, however I saw a number of people leaning into the wind as they moved from coach to coach.  Tuesday evening our coach will be open for touring.

Of course, throughout the day people came by to talk, and as I walked around the park after my two projects were completed there were more conversations.  We have a great group here, and we are so grateful we put this mini rally together.  It, so far, has exceeded our expectations!

To close out the evening I watched the Blackhawks vs. Bruins NHL game six.  The 'Hawks were down 2-1 with 1:28 to go in the 3rd, and final period, when they managed to score 2 goals in less than 17 seconds to go up 3-2, and held on in a frenetic final minute of play to win their second Stanley Cup in four years.  Congratulations to my friend Keith in Highland, IN who is a die hard 'Hawks fan.

Thanks for stopping by!
Posted by Whatsnewell at 6:57 AM