We have done very little site seeing since we arrived here in Spearfish.  We have spent a lot of time visiting with, and getting to know fellow Newell owners, as well as helping fix things, install things, etc.  However, we had set Thursday aside to travel to a few local sites.

At past Rallys we have usually spent time with Tom and Darlene McCloud site seeing, and this rally is no different.  Tom approached me on Monday about what days we would like to get out and see some of the local sites.  Initially we had agreed to go and drive Spearfish Canyon on Tuesday, then on Thursday head over to see Mt. Rushmore.  Well, Tuesday ended up being a day I helped Todd begin the installation of his satellite dish.  Originally I had thought I would work on his dish in the morning, then go do the driving tour of Spearfish Canyon, however, I had more than a normal amount of insurance stuff to catch up on, and did not get to Todd's coach until early afternoon, which is when we were going to go driving.  I stayed home and worked on Todd's satellite dish, but TLE went with Tom and Darlene.

Since our Thursday jaunt was to be an all day event I scheduled nothing else to be sure nothing would interfere with the day.  I don't know about you, but I have always wanted to see Mt. Rushmore.......well, ever since I saw the 1959 Alfred Hitchcock movie "North By Northwest" starring Cary Grant and Eva Marie Saint in which Mt. Rushmore, and the surrounding environs had a prominent roll.

Gutzon Borglum as sculpted by his son, Lincoln Borglum

We departed Elkhorn Ridge around 10:15 am headed for our initial destination of the day, Keystone, SD.  Keystone is just a few miles from Mt. Rushmore, but houses a museum dedicated to the sculptor, Gutson Borglum, the son of Danish immigrants, who conceived, and "built" this memorial dedicated to the miracle we call the United States of America, honoring George Washington, Thomas Jefferson, Teddy Roosevelt, and Abraham Lincoln.  No pictures are allowed inside the museum.

The drive to Keystone from Spearfish is about 62 miles.  The weather Thursday was just gorgeous, and the drive was uneventful.  Keystone is a town basically dedicated to tourists who come to visit Mt. Rushmore, and the other numerous touristy attractions in the area, and they are numerous, but our only reason for being in the area was to see Mt. Rushmore, and drive through and around Custer State Park.  Of course there are the usual souvenir shops replete with everything "Rushmore".   When we arrived it was after 11:30, and by the time we located suitable parking it was time for a little nourishment, so we headed over to a local pizza place with outdoor dining (the McClouds had their sweet dog Missy with them) where we all got the "Pizza Combo" (slice of pizza and a drink) for $4.50.  It was delicious stuffed pizza, and really hit the spot.

Once we were properly fortified with nourishment we walked the short distance over to the Borglum Historical Center where we were each separated from a $5 bill to do the "half" tour....of course the full tour is $10, just like about everything else we would see this day.  We watched a movie about Gutzon Borglum and his life as a sculptor.  It is about 23 minutes long, and I recommend seeing it before you go to Mt. Rushmore, but you can do it in any order that pleases you, or not see it at all.  I just think the movie gives one perspective for the actual monument.  In addition to the short movie there is a sort of pictorial museum, and a number of sculptures Gutzon Borglum created in his lifetime.  Abraham Lincoln was his favorite President, and he did numerous sculptures of Lincoln, as well as naming his son Lincoln.

From Keystone it is a short 3 miles to this National Monument......you are driving along seeing signs that say you are almost there when suddenly you turn a corner and there it is.

We're as good lookin' as those guys, are we?

There are absolutely no dogs allowed in the Memorial so Tom stayed with Missy at the car....he had been here years before.....so Darlene, TLE and I headed up to see this amazing sculpture that was carved out of a mountain so many, many years ago.  Our timing was perfect in that we arrived just as a naturalization ceremony was beginning.

What a cool place to take your citizenship oath!  We walked around, visited the museum dedicated to the construction of this massive sculpture, and took a boatload of pictures.

Next up on our list of things to do was to drive over to the Crazy Horse Monument, the brainchild of Korczak Ziolkowski......it has a long, long way to go, and the only thing you can really see is the head of Crazy Horse......there is not much else about this massive sculpture that is recognizable, but it is obvious that a lot of rock has been moved.

The upper picture is what we saw from the entrance

It was getting late in the day, and we still had a long site seeing drive we wanted to take through Custer State Park, and particularly the Needles Highway, so when we saw it was going to cost us another $40 to get in we opted out.  No doubt when this sculpture is done it will be amazing.....just the work done on the head is amazing.

We then headed over to the entrance to Custer State Park where we were again separated from another $15 for our car to enter the park....by this time it was after 3 and we were ready for a snack, so after paying our entry fee we headed over to the park store to get some ice cream cones.

We enjoyed sitting in the shade eating our cones, and joking around like we always do.  Then it was time to start our drive on the Needles Highway.  What a beautiful highway replete with numerous rock tunnels mostly one lane wide, and breathtaking views of rock formations. 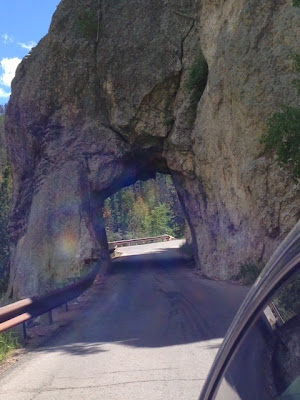 These 4 pictures taken by TLE.....very nice! 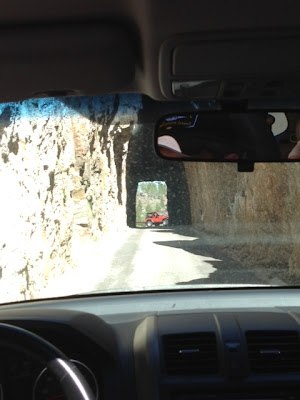 A "pano" taken by TLE 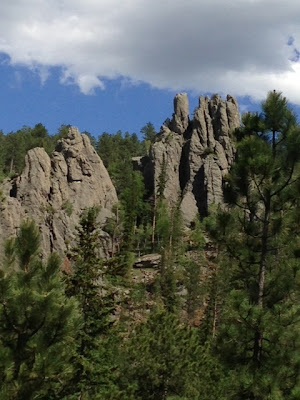 The Needles Highway drive is a must, and we are so glad we took the time to make this drive.  We arrived home around 7:30 pm with smiles of satisfaction on our collective faces.  It was a good day spent with good friends seeing some amazing scenery including the iconic Mt. Rushmore.