I like secondary roads a lot, and have rarely ever been disappointed....I say rarely, because there have been a couple of times when I was wondered, sometimes quite out loud, why I had chosen that particular road.  It's easy to just cruise the Interstates, and most often it is the easiest way to travel east, west, north and south, but after a while you've seen all there is to see along the Interstates and want to see something different.  My quandary is I have a "big rig" and don't want to end up on a road that is too narrow for me, or in poor condition.  The year we were headed to Amazon in Campbellsville, KY my mapping program led me on to a very, very narrow road.  When cars were approaching me I had to almost pull on to the shoulder to let them by......once I was committed to that road there was no turning around......literally.  It was the worst coach driving experience I have ever had, and I still wonder how I drove that 35 miles without putting the coach in the ditch.  It is that memory which always makes me a littel queasy when we decide to take a secondary route to a destination, such as we did Friday.

Ironically, the shortest distance, by a lot, was to take a "zia zaggy" route up to Sioux Falls from North Platte.  Taking the Interstates would have added close to 80 miles to our drive, and besides.....we've already seen that scenery before.  Our route would take us on 9.....count them.....9 different US and State highways just on Friday.....on Saturday we will traverse 3 more......so a total of 12 different roads.......that is not what I do......I like to drive in straight lines.  Well this day I decided, "why not?" and just decided to follow my mapping program's advice. 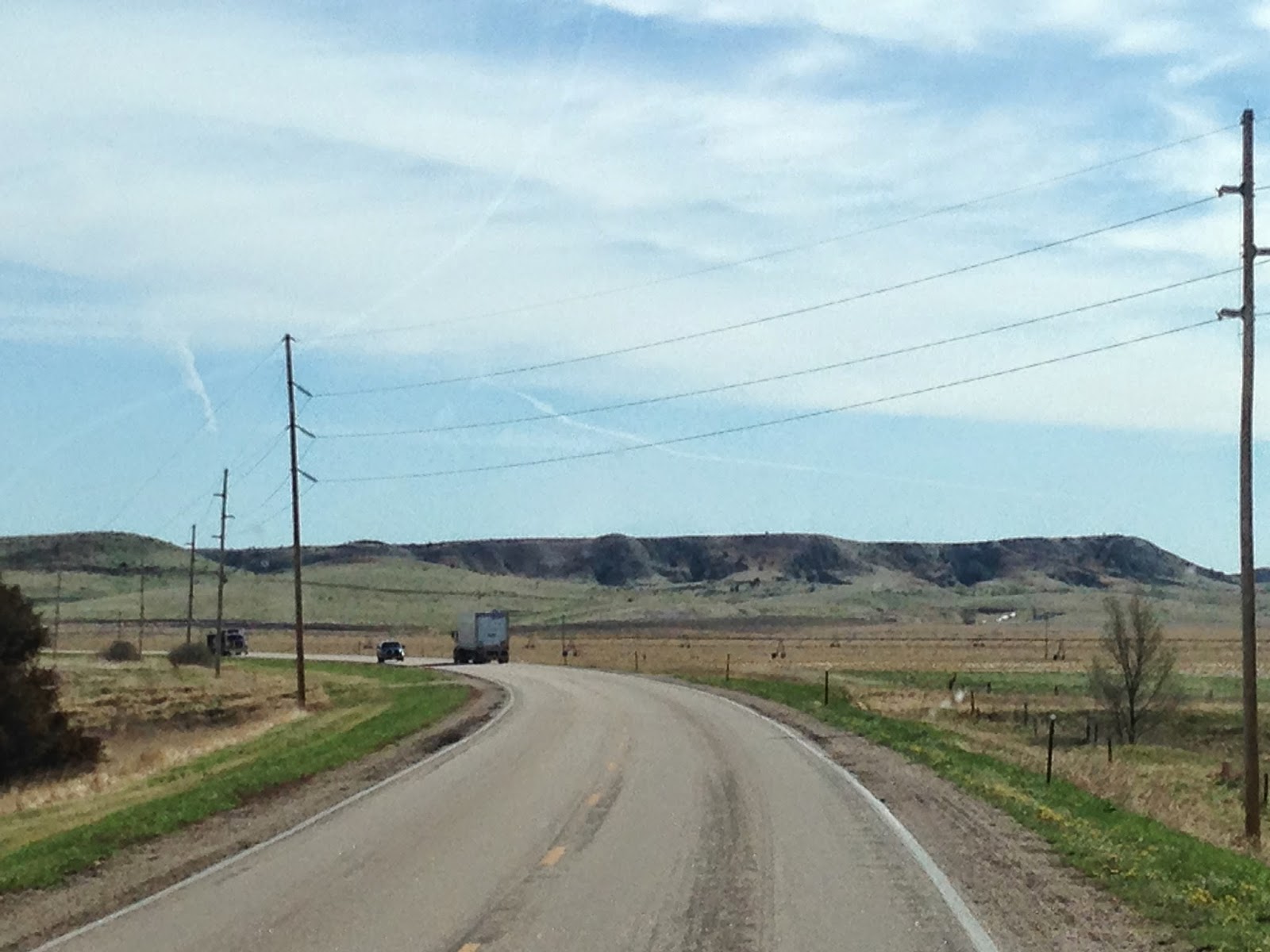 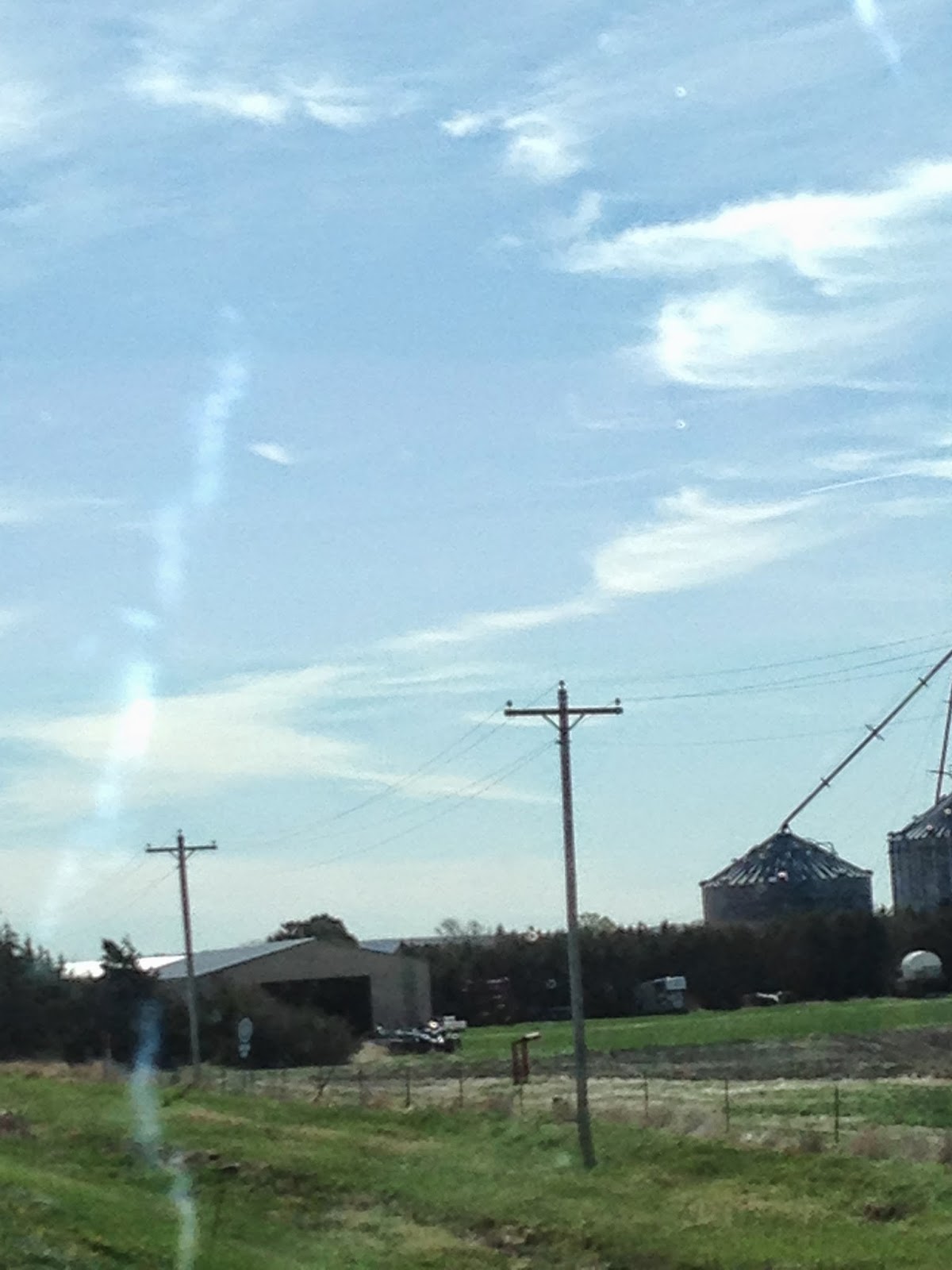 Surprisingly once I got used to changing directions every 15-30 miles I was fine.  The roads were in pretty good shape, with some in marvelous, almost new condition.  The one thing about doing this in farm country is there are no straight lines.....the roads tend to follow property lines, and also tend to go up and down a lot.....I mean a lot.   We did enjoy driving these back roads through the heart of Nebraska, but sometimes, like Friday, it takes a lot more energy to do so. 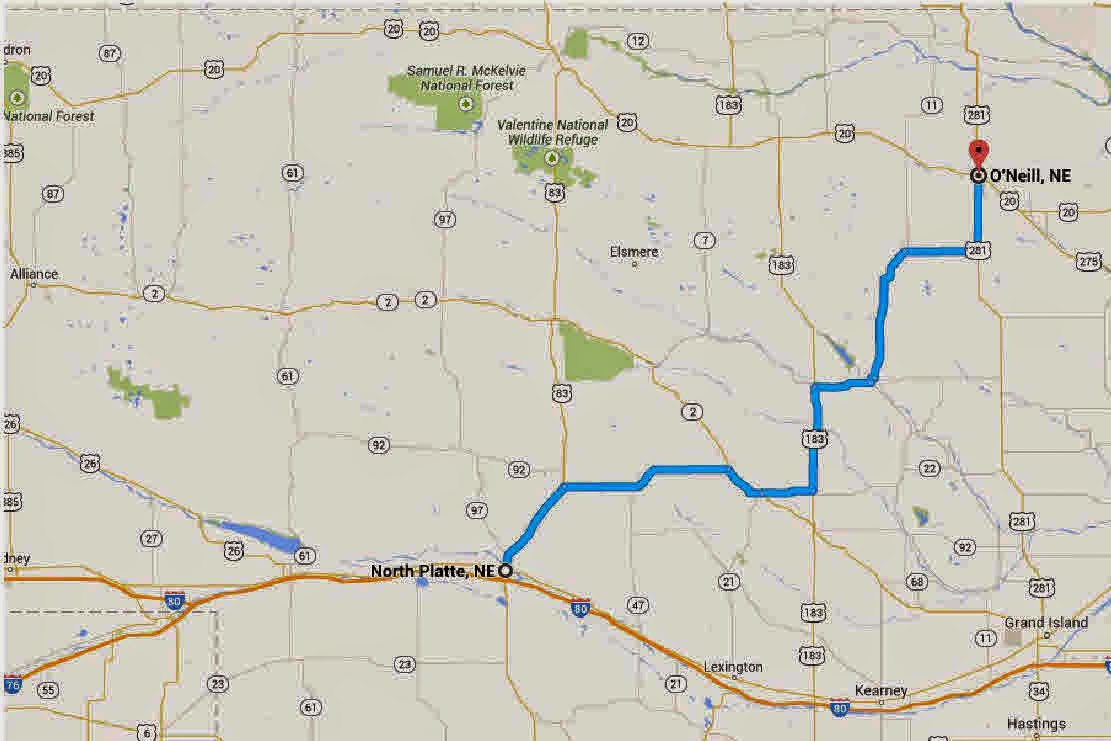 Nevertheless, on Friday we drove 203 miles of secondary roads (10 of those miles were due to a navigational error on my part) to O'Neill, NE arriving around 1:30 at Carney Park.  I found Carney Park on RVParkReviews.com once again.....this little city park offers three days of free camping with water and 20, 30, or 50 amp electric service.  After three days it is $10/day......still not bad, huh?  Of course, as the sign below says, they do appreciate donations, and we will be sure to leave a donation for them before we leave.

My first order of business after we arrived was to take advantage of the location and wash the trailer and coach which were absolutely filthy.  After driving through melting snow a couple of times (going north from Cottonwood, AZ to Flagstaff, AZ and then over the Continental Divide), plus a couple of rain storms (coming into Ft. Morgan, CO) it was time for a thorough cleaning with water.

It took about 2 hours in all, but it was worth it.....now my baby looks like herself again!

I'm so glad I had the coach waxed before we left Rancho Jurupa Regional Park, because that really made the job so much easier.  Usually when I wash the trailer and coach it takes me three, or four hours, but the dirt just washed right off.

TLE had a snack ready for me when I finished, and then I took a shower.  By this time it was after 4 and time for a nap.....for me.  We spent the rest of the day reading, and enjoying the quiet of this neat city park.  I am finding there are a lot of these city parks in the midwest where the fee ranges from free to $10, or $12 bucks per day.

Saturday we will complete our drive up to Sioux Falls where we will stay at the fairgrounds for a week, or so.....I'm so looking forward to installing my new bumper!

Thanks for stopping by!
Posted by Whatsnewell at 5:29 AM