How did it all begin?

Friday morning I composed my 2,712th blog post since I began blogging back in May of 2009, and sometime either late this year, or early next year I will pass the 3,000 mark.  Over that time there have been some 1,243,384 page views.  There are some days when I think it would be nice to take a break, but that feeling quickly disappears.  Sitting down to compose my blog each morning just after I wake up has been my habit since I began blogging on a daily basis back in October of 2012.  Frankly, I cannot imagine doing anything else first thing in the morning.  My original purpose when I began blogging was that this would be like a diary for me, and our children, and grand children could read it to find out where we were, and what we were doing.  That anyone else besides my family reads my daily missives is somewhat of a mystery to me, but I am humbled, and grateful that so many choose to read my ramblings each day.  I go through periods of time when my writing seems to me to be a little perfunctory, but I do strive to be somewhat interesting whilst transmitting a sense of what our life looks like living full time in our 1982 Newell Classic.

When the dream of living and traveling full time in an RV first crossed my consciousness I began to search the internet for information about how to do it.  One of the first sources of information I found was a blog by the name of 'The Adventures of Tioga and George'.  George began blogging back in May of 2003, about a year before we purchased our original 1987 Fleetwood Tioga Arrow, a 26' Class C motorhome, and that is how I found George's blog.....he owned a 1991 Fleetwood Tioga Arrow, a 27' Class C motorhome.  And that is how it began.  I read through all of his blog posts finding out about how he had installed a solar system on his Tioga in an effort to avoid staying in RV parks.  He wanted to RV on his own terms, and stay where he wanted to stay, but off the grid.  This kind of RV lifestyle had great appeal, and as we edged ever closer to our full time dream coming true I endeavored to set up whatever RV we obtained to be able to function off the grid.  My goal was not to do it 100% of the time like George, but as often as the opportunity presented itself.  While George's Tioga was 27' long, my rig with trailer is 62' long, so a lot of George's boondocking choices would never work for us.  At any rate, I wanted to option to live off the grid when I chose.

It was because of George's blog that I decided I would do the same, and so on May 28, 2009 I wrote my first blog post introducing ourselves formally to the blogosphere.  I only wrote 39 blog posts in 2009, and the same in 2010.  I only posted when we were out using the Newell.  I began posting daily in October of 2012 when we arrived in Campbellsville, KY to work at Amazon for the first time.  I wanted a daily record of that experience.  Frankly, I only intended to do the daily posts until we finished our Amazon contract, but by the time we left Campbellsville just shy of 3 months later I was hooked on the daily routine, and have continued that ritual ever since.

And so here we are today, April 20th, writing about the events of April 19th.....so what happened on April 19th?  The registration on the VW is due to be renewed in July, and in California one must get their vehicles 'Smogged' (tested to see if they pass current emission standards for that particular vehicle) every other year.  Since this is a 2001 VW my test years are always the 'odd' numbered years....easy to remember.  We left home around 10:30 am to drive over to Joel's Automotive.  I have been going to Joel's for car service since the mid 90's, and even though his shop is a good 30 minute drive from the Elks Lodge we continue to go there for repairs, and smog testing when we are in SoCal.  We arrived there just after 11 am to find Joel's smiling face behind the counter.  We need no  repairs this year, so it was just the smog test, and true to form the car was tested and returned to us with a passing grade within 20 minutes.

The local 'The Hat' world famous Pastrami Dip place is just up the street from Joel's so that is where we headed next.  TLE and I split a single Pastrami Dip and an order of onion rings...... 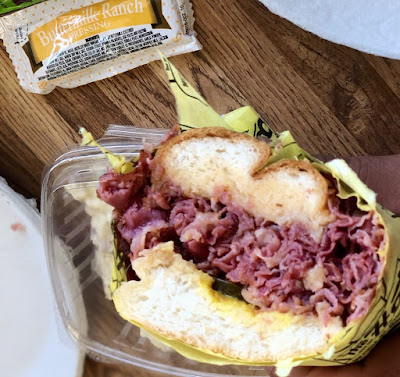 1/2 of the world famous Pastram Dip 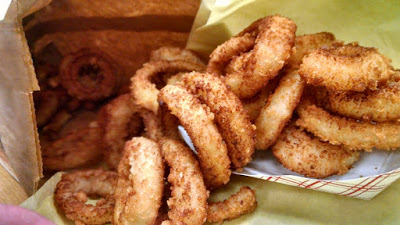 ......the Pastrami Dip is so big, and has so much meat there is no way to eat a whole one by yourself and have onion rings, and don't get me started on their amazing, magical onion rings!

I had my scheduled Pacific Eye Institute appointment at 2:15 pm to have three tests run to determine if I have glaucoma, or not.  The results of those tests will be revealed when I meet with Dr. Dovich on the 25th.  At any rate, when we finished eating it was just 12:30 pm, and we did not need to be at Pacific Eye Institute until 1:45 pm, so TLE found a couple of thrift stores where we could do some 'junking' to pass the intervening time.  I did not find anything without which I could not live, however, TLE found one clothing item that she had to have.

We arrived at Pacific Eye Institute around 1:40 pm, and I was called in for my three tests around 2:20 pm.  I can take a nap pretty much anywhere, and that is what I did to pass the intervening time.  The tests were completed by 2:40 pm, and we were on our way home to the Elks Lodge arriving home just about 3:15 pm.  We turned on the A/C before we left at 10:30 am, and it was into the low 90's outside, so we arrived home to a cool Newell interior.  Love those 37 year old Duo Therm A/C's!

And so, there you have it.....another day in our lives out there for public examination, and/or comment.  Thank you for stopping by to follow our story!


When you shop Amazon, please use our link (below) to access their website.......we will appreciate every purchase you make using our Amazon Affiliate link, and  remember, using our link will not add one penny to your purchase, plus we will receive a small commission which over the course of a year adds up to enough to by a tank of diesel.
Posted by Whatsnewell at 8:47 AM