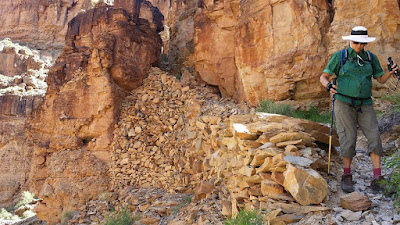 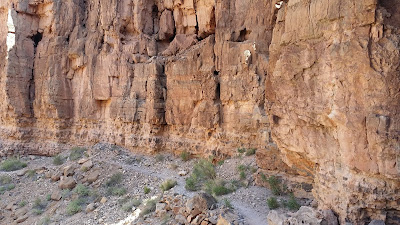 .....this trail is about 2.9 long from the top of the canyon, to the San Juan River at the bottom.

Our original Jello plan was to be departing Wittmann on Monday to drive 60 miles over to All Aboard America in Mesa, AZ to have our coach drive train inspected before we would begin our trip to Alaska for the summer.  Since we arrived here in Wittmann  on March 4th the entire world has changed.  Our trip to Alaska is put off another year, unless something dramatic happens in the next month.  We still have our two reservations intact (Seward, AK over 4th of July, and Denali National Park later in the same month) just in case something changes.

From All Aboard America we were to begin our trip north to Springfield, OR to A.M. Solar where Glenn and Laureen would have their solar system installed.  Now, instead, they are having system shipped here to Newell House in Wittmann, AZ where we, with Tom's help, will install it.  Glenn and Laureen should be arriving here within the next 10 days.  Once the solar is installed our Jello plan calls for us to head north from Wittmann into western Colorado, and just make it up from there.....we'll see what develops.

One of the things I was going to have Leo, our mechanic at All Aboard America, check during our service appointment was our Jacobs Engineering Brake to be sure it was working properly.  Since we cancelled that appointment I decided to check it myself.  In layman's terms I flip a switch on my console to activate the 'Jake' brake, and a signal is sent over a 12 volt wire to a solenoid, which sends oil through a small tube to activate the engine braking system.  If those tubes come loose, there is no oil pressure, and the 'Jake' will not work.  Leo found these tubes disconnected a few years ago, and reconnected them.

I've never pulled the valve covers off before, so was is virgin territory for me.  There are two bolts on top of each valve cover, which afix the cover to the engine...... 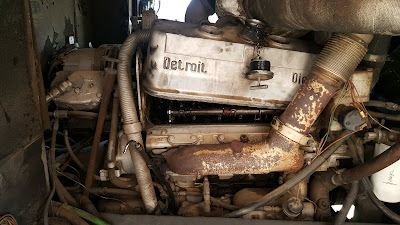 ......once they are removed it is a matter of lifting up the valve cover to check the oil tube connections.  You can see the tubes in the picture below..... 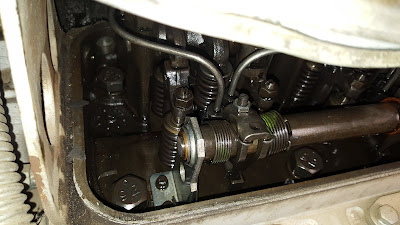 This is the driver side of the big Detroit Diesel 6v92

.....there are six tubes on each side of the V-6, for a total of twelve, which send pressurized oil to each 'Jake' activating them.....these six tubes have a screw cap on each end, so there are 12 (24 in all) of these on each side to check to be sure they are still connected, and tight.

It took me a couple of hours beginning to end to remove the two valve covers, check all the oil tube connections, and then put everything back together.  It was harder in some ways than I expected, but overall it was easier than I thought would be.

This was the only thing I accomplished Monday, but it was enough.  Now I know my 'Jake' brake is functioning properly, and I have added one more skill set.  I spent the rest of the day reading, and napping.  It was a beautiful, balmy day, but we did have strong breezes late in the day which made it a little difficult to BBQ the salmon steak TLE had defrosted earlier in the day.

We had another 'Zoom' call with my mother (her 5 children and spouses), but on this day she had declined rather rapidly from Sunday, and was coming in and out of consciousness throughout the call.  Right after the 'Zoom' call I called our very good friends Bob and Karen who live on Whidbey Island in Washington using Facebook....I don't know why I don't use this option more often, as you can do a video call so easily.  We have parked the Newell on their property several times over the years....... 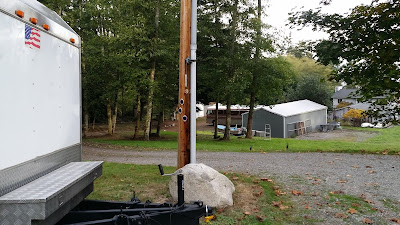 ......I have known Bob since summer camp in 1963, and TLE has known him since 1962, or possibly earlier.  We've known Karen since the early 70's....they are dear, dear friends.  Bob had called earlier to convey his condolences regarding my mother, and it was a very timely call.  He and I always seem to sense when the other needs encouragement.

TLE and I continue to be in good health.  It appears that the Chinese virus epidemic is peaking much faster than all of computer modelers expected, and with far fewer deaths, and hospitalizations than predicted.  As you know I call weather forecasters weather guessers for obvious reasons.  Computer modelers who use computer models to predict the impact of a pandemic are even bigger guessers than they......while their models have been pretty accurate predicting the number of deaths from day to day the last few weeks, they have been off by factors of anywhere from 3-12 when it comes to predicted hospitalizations, as you go state by state.  Initially they were predicting a million dead in the U.S. from this pandemic, then a week ago that came down to 100,000 to 250,000, and now just yesterday it is down to under 83,000, and falling.  So far we are just under 11,000 with the rate of new deaths appearing to plateau now.  As real life catches up with the modeling guessers I expect the total predicted deaths to come more in line with reality on the ground.  Our economy was literally shut down based on these bogus computer models.  Is the virus extremely contagious....yes, but that depends on where you live. If you live in NYC, or Boston, New Jersey, Chicago, Detroit, L.A., San Francisco, etc. it is very easily spread due to the high population density.  If you live in rural America, not so much.  We have also found out as recently as yesterday that the 'bearded' experts were completely wrong, perhaps lying, about the effectiveness of face masks, and are now saying they are very effective....what a bunch of B.S.  When the advice of 'bearded' experts conflicts with common sense go with common sense.  All that being said, we are still practicing 'social distancing' and wearing face masks when we must go into town to shop.  All that being said, every single death is one too many no matter what the cause, right?  Looking at the macro view of what has, and is happening I have this really bad feeling we have been led astray by the computer modelers.....that's my two cents, and I'm sticking to it.

Posted by Whatsnewell at 8:45 AM